The Padres reached the postseason because several players emerged to be major contributors in the 2020 season.

Despite the COVID-pandemic reducing the 2020 season to just 60 games, the San Diego Padres entered the year with enormous expectations.

Sure the ballclub finished with a 70-92 record last season, but they sustained a number of injuries and subpar seasons from players who were expected to contribute. Rookie sensation Fernando Tatis Jr. was limited to only 84 games, with a lower back injury prematurely ending his year in August.

Manny Machado was inked to a ten-year deal during the offseason, but he failed to live up to what a Machado season should look like. He finished the year with a .256 average, 32 home runs, and 85 RBI’s. At first glance, the numbers look strong, but a deeper dive revealed that the 27-year-old really scuffled down the stretch, hitting .221 and .193 in August and September, respectively.

Chris Paddack had an outstanding rookie season. Dinelson Lamet looked strong in 14 starts, returning from Tommy John surgery. Garrett Richards returned at the end of the year to make three abbreviated starts. And the Padres acquired Zach Davies from the Milwaukee Brewers during the 2019 offseason. Everything was falling into place. The Padres jumped out to a fast start in the shortened season, with grand slams highlighting what felt like a weekly event.

But the team received significant contributions from these three players.

Before making his Padres debut, Trent Grisham was known for his blunder in right field in the 2019 Wild Card game. The error allowed the Washington Nationals to score three runs and ultimately go onto win the game. He was part of the Davies trade, sending Eric Lauer and Luis Urias to Milwaukee to complete the deal.

Despite hitting .231 in 51 games during the 2019 season, Grisham was projected to be a superstar. He played in all but one game for the Padres in 2020, posting a .251/.352/.456 line with eight doubles, 10 home runs, and 26 RBI’s. He also swiped ten bags and recently earned a Gold Glove Award for his outstanding defense in centerfield.

He spent most of the season hitting from the leadoff spot in the Padres’ order, allowing Tatis to hit from the two-hole for more RBI opportunities. 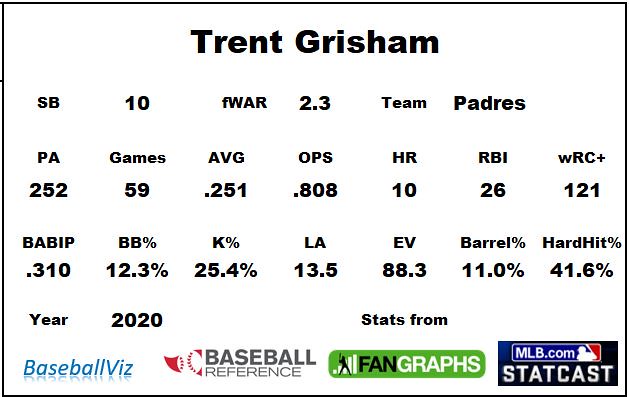 Grisham finished the 2020 season with an impressive .808 OPS, 11.0 barrel percentage, and nearly a 42 percent hard-hit rate. And he’s only going to get better.

Where would Jake Cronenworth be right now had Eric Hosmer not missed so much time early in the season? It’s an interesting thought, as the 26-year-old had yet to take a major league at-bat prior to being acquired from the Tampa Bay Rays during the offseason. He hit well at every stop in the minor leagues but always seemed to be passed over for a chance to earn a spot on a big-league roster.

He played one game at first base in the minors, but he looked like a seasoned veteran, flashing the leather in Hosmer’s absence. Cronenworth was productive at the plate as well, clearing a spot at second base when Hosmer returned. In all, he posted a .285/.354/.477 line, leading all rookies with 15 doubles.

A contact hitter, Cronenworth struck out in less than 16 percent of his at-bats while logging a 10.5 percent barrel rate and a 42.7 percent hard-hit rate. He logged a .984 fielding percentage at second base, turning 19 double players, and he’s a finalist for the National League’s Rookie of the Year Award.

Was there anyone not named Tatis or Machado more valuable to this Padres team than Wil Myers? After the past two seasons, it was trending towards a matter of not if, but when he’d be traded. Before the 2020 season, trade rumors surfaced about a potential three-team trade involving Nick Senzel from the Cincinnati Reds and the Boston Red Sox. Nothing ever materialized from those rumors, and the Padres couldn’t have been happier with how things played out.

The 29-year-old played in 55 games and joined in on the grand slam parade, smacking two in the shortened season. He posted his lowest strikeout rate since the 2016 campaign and a career-best 154 wRC+. If Myers has a productive 2021 season, the Padres will have a much more difficult decision to pick up his $20M option in 2022. Of course, Fernando Tatis Jr.’s impending extension might have a role in that.

The state of the Aztecs entering final quarter of the season