If Jurickson Profar chases a bigger contract in free agency, the San Diego Padres should look at these three players on the open market.

Not long into the free agency period after the 2019 season, the Padres acquired Jurickson Profar from the Oakland Athletics. The 27-year-old had a breakout year with the Rangers in 2018, which felt like a decade in the making. He signed with the club as a highly-touted international free agent in July 2009. Consistently ranked as one of the league’s best prospects, Profar never materialized into a big-time superstar. And the beginning of his tenure in a Padres uniform did little to convince General Manager A.J. Preller that the trade was worth it.

Despite starting the year 3-for-31 at the plate, Profar’s infectious energy was a much-needed shot in the arm for a young Padres clubhouse. The hits soon followed as Profar hit .344 over the final 30 games, including three home runs and 15 RBI’s. When Tommy Pham went down with a broken hamate bone, Profar stepped in admirably.

With 38 career games in left field, Profar became a regular in the lineup while logging a perfect fielding percentage. He also chipped in three assists from left field. Profar is among the three key free agents this offseason – along with Kirby Yates and Trevor Rosenthal – with the Padres hoping to retain at least one. Going forward, Jake Cronenworth is the everyday second baseman. He dazzled with stellar defense and timely hits when Eric Hosmer alternated days off with stomach issues early in the season.

Certainly, the Padres benefited from having the universal DH in the 2020 shortened season. The flexibility opened up additional playing time on a crowded roster. But the league has yet to determine if the DH will remain in the National League for the 2021 season. Of course, re-signing Profar would give the Padres one of the deepest infields, but he’s projected to receive a handsome payday.

According to Spotrac, the market for Profar suggests he will receive a contract at a $6M AAV. He was slated to make a pre-COVID $5.7M. Before the shutdown, the Padres were reportedly weighing the option of cutting Profar before the end of Spring Training to free up some dollars. If he doesn’t return next year, the market isn’t great for high-profile utility infielders, but there are some options to consider.

The former Baltimore Oriole and Milwaukee Brewer spent last season with the Detroit Tigers as the primary second baseman. In all, the 29-year-old played in 44 games while posting a .278/.324/.475 line with eight home runs and 23 RBI’s. Jonathan Schoop doesn’t walk much, but he also doesn’t strike out a lot either. He logged a 114 wRC+ in the shortened season, which marked the best value since logging a 120 wRC+ with the Orioles in 2017. Was it a fluke? Not necessarily, as Schoop had strong years in back-to-back seasons.

In 2019, he was with the Twins and hit .256 in 121 games. His walk and strikeout rates were in line with 2020 numbers and somewhat close to career averages. Spotrac views his market at a $5.4M AAV contract. Might he be willing to take a one-year flyer, or is he looking for long-term security after being on four teams in three seasons? The Padres will have to determine that with Schoop’s camp and go from there.

Tommy La Stella was a valuable member of the Chicago Cubs organization, logging a .312 average in pinch-hit scenarios during the 2018 season. He was a key cog in the wheel on the north sider’s bench. Last year, former Cubs’ manager Joe Maddon followed him to the Angels, but he (La Stella) was traded to the Athletics after 28 games. Between both clubs, the 32-year-old posted a combined .281/.370/.449 line with five home runs and 25 RBI’s. In 2019, he launched a career-best 16 home runs, but that’s looking more-and-more like an anomaly. 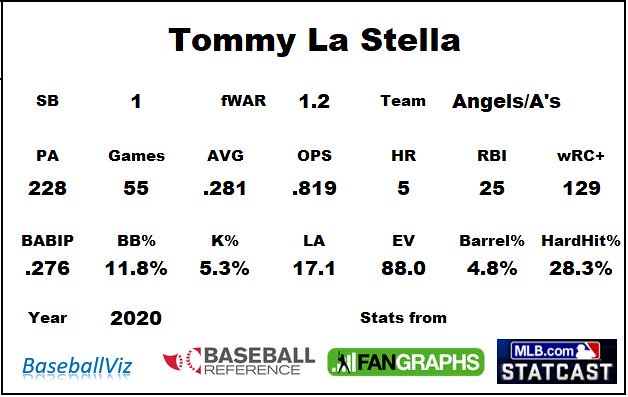 La Stella provides a pure contact hitter to a Padres lineup, logging just a 5.3 percent strikeout rate in 2020. He’s never going to blow anyone away, but he is a consistent ballplayer who is a strong veteran presence on an up and coming Padres club. Spotrac didn’t project his next contract, but he made $3.3M in 2020. Perhaps a one-year deal worth $4M with a 2022 club option could get it done, but he’s going to be one of the more attractive utility men on the market this offseason.

Dee Gordon looks like a prime bounceback candidate in the 2021 season. He had a challenging shortened year, to say the least. The 32-year-old has been with the Mariners organization the last three seasons, but he hit only .200 in 33 games in 2020. He rarely played in back-t0-back games, unseated by Tim Lopes and José Marmolejos at second base and left field, respectively. Along with the emergence of Kyle Lewis in the outfield, Gordon was without a position to play.

He’s a year removed from posting a .275/.304/.359 line with 12 doubles, six triples, three home runs, and 34 RBI’s in 117 games. Nobody should expect Gordon to put up the numbers that earned him All-Star selections in 2014 and 2015. However, he can be a serviceable backup at second and in the outfield-similar to how Profar was utilized in 2020. Spotrac projects a very affordable $2.1M AAV deal for Gordon this offseason. A one-year “prove-it” deal over the course of a full schedule could propel Gordon into a multi-year deal with either the Padres or another ballclub beyond 2021.

Ya l believe pham was a must take in the crowneworth deal.but we traded 16 away got nine and may only sign one maybe two.yesterday we had to give up a pl a yer to be named later to Boston today we lost another to complete r te the profit trade
So 18 players traded fo may on guy signed or 2 a best .I say fire preller.he gave up some good players off our roster for guys that were all hurt.86 him now.

I think the Padres should let Pham go and try to sign Profar.

It actually wouldn’t surprise me if the Padres trade Pham away this offseason. We’ll see what happens.