If Trevor Rosenthal departs via free agency, the Padres should focus their attention on these three bullpen arms.

Despite most of the bullpen set to return next season, the Padres will have a couple of key free agents to determine whether to bring back. Among those include Trevor Rosenthal. The 30-year-old was one of the team’s first trade deadline acquisitions, sending Edward Olivares and Ronald Bolanos to Kansas City to complete the deal.

Rosenthal collected seven saves with 21 strikeouts in 13.2 innings with the Royals. He followed that up with three saves in four chances, fanning 17 batters while not allowing any runs. In the team’s first postseason appearance since 2006, Rosenthal closed out the St. Louis Cardinals in the NL Wild Card round, sending the Padres to the NLDS.

The big righty will be one of the most coveted closers on the free-agent market this offseason. In his year-end press conference, general manager A.J. Preller indicated that he’d like to have one of Rosenthal, Kirby Yates, or Jurickson Profar to return.

Rosenthal was excellent for San Diego in a small sample size. Should he depart via free agency, the Padres should consider these three players to bolster the back end of the bullpen.

Would the Padres welcome a reunion with Brad Hand? The Indians shockingly declined his option for 2021, leaving the 30-year-old looking for a new home this offseason. He was one of the better stories with San Diego. Claimed off waivers in April 2016, Hand emerged to be one of the league’s best closers the following season. He collected a career-best 34 saves with the Indians in 2019 and 16 saves in the 2020 shortened season.

Hand’s batted ball statistics suggest that he’s tending toward a flyball pitcher, as he flips to the other side of 30. Between 2017 and 2020, Hand has gone from 33.9 percent flyballs to 57.1 percent. Could there be a reason for long-term concern? Despite pitching a robust 2.05 ERA, Hand’s peripherals suggest that he should have posted better numbers.

A one or two-year deal would make a lot of sense. 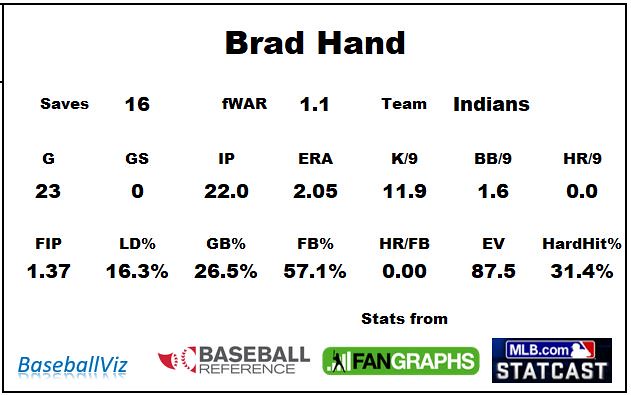 It wasn’t too long ago that Shane Greene was one of the most sought-after closers on the market. The Tigers dealt him to the Braves at the trade deadline in 2019 for two prospects, including Joey Wentz, ranked as the ninth-best prospect in Detroit’s farm system.

After posting a 1.18 ERA in the first half of 2019, the second half went about as bad as Greene could have imagined. He redeemed himself in 2020, posting a 2.60 ERA while fanning 21 batters in 27.2 innings of work. And while he primarily pitched in the eighth inning, he’s a year removed from a combined 37 saves.

Greene will be 32 when the 2021 season begins. He features five pitches in his arsenal with a devastating cutter that yielded a .182 average against and a 23.5 percent whiff rate this past season. The velocity on his sinker has dipped over the past two seasons, which could limit him to an eighth-inning role at best. In that scenario, Emilio Pagan figures to slide into the closer’s role.

Trevor May could end up being one of the best free-agent bargains this offseason. He was set to earn a pre-COVID $2.2M and could likely be had on an affordable deal. May’s story is remarkable. A former starter who underwent Tommy John surgery in 2017, May emerged as an elite bullpen arm.

This past season, he posted a 3.86 ERA with 38 strikeouts in 23.1 innings (14.7 K/9). Batters made their contact count against May, finishing in the bottom nine percentages in barrel percentages and average exit velocities. Having said that, his 39.6 strikeout rate was good for the top two percent of the league.

May 31 features four pitches but rarely uses his sinker. His four-seamer and slider are above-average pitches, yielding a 46.9 and 34.4 percent swing-and-miss rate, respectively. He’s collected just seven saves over the last three years combined but allowed a .138 average in high leverage situations.