That was the consequence for arriving late to any of Jim Dietz’s practices at SDSU. The culprit would disrobe down to his protective underwear, posterior blowing in the wind. With his more punctual teammates as an audience, he would belt out a rendition of The Star-Spangled Banner before running from foul pole to foul pole along the warning track. Dietz did not have many repeat offenders.

Volunteer assistant coach Pat Oliverio on his first day on staff, learned an important lesson about Dietz’s character that he has never forgotten. Steve Dietz, the son of SDSU’s legendary baseball coach, arrived a little late to the team’s workout. The younger Dietz tried to leverage his relationship with his dad to get out of the mandatory jock run.

“He was very awesome,” Oliverio said when asked what kind of man Jim Dietz was. “He was actually a very quiet man. Game time, he could be a little fiery, but he was actually pretty soft. He was a pretty quiet guy. What he did was he treated everybody the same.”

“My first year on the team, his son’s on the team, Stevie Dietz,” Oliverio told EVT. “We’re out there for practice. Here comes Stevie. … (Jim Deitz) said, ‘you’re late. You know the consequences, strip.’ His own son, so from the very first year I was there, I saw how he was fair to everyone. He treated everyone fair.”

For more than ten years as an assistant and first base coach, Oliverio had a front-row view of what made Dietz a legend. Oliverio traveled on the road with the team and was on hand to witness milestones like Dietz’s 1,000 career victory, an 8-1 win over Toledo at a non-conference tournament hosted in Las Vegas.

The fairness Oliverio observed over his decade working under Dietz extended far beyond imposing rules. SDSU’s skipper would parcel out scholarship money amongst his players. Some would get money for books, others for housing, others for a meal plan, etc. That Dietz was able to attract recruits while balancing all the needs of his players equitably over such a long period is nothing short of art.

Dietz also took advantage of the opportunities around him to ensure all of his players had an equal opportunity to develop on the field. Before the 1992 season, college baseball teams could schedule more than their current allotment of 56 games. Under Dietz, the Aztecs played enough games to field essentially a varsity and junior varsity team, which maximized playing time for everyone. From 1982 to 1984, SDSU played 88, 87, and 89 games. Six players on the 2022 squad have ten or fewer at-bats, something that would not have happened before the rule change. 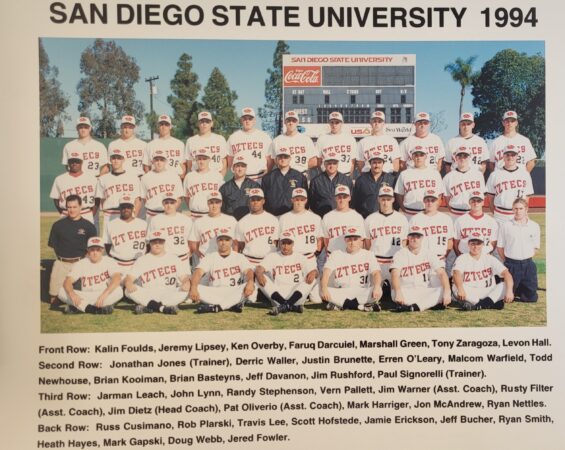 To fill his ambitious scheduling, his fairness came to bear once again. Dietz gave any team that asked an opportunity to play his Aztecs. From junior colleges, NAIA schools, MLB, and MiLB teams, SDSU played them all.

“There’s no substitute for hard work and dedication,” Dietz told the Daily Aztec after his 1,000 career victory. “This ought to send something out to other coaches. Don’t sit around and complain when you don’t have something. Go out and do something about it.”

“Learn how to promote your sport and just do the best you can with what you have. Make those home visits, and if you get turned down, who cares? Keep plugging, and pretty soon, you’ll get enough good players to compete. The message that should come out of something like this is work hard, and if you stay consistent, good things will happen.”

If there is a philosophical statement that defines Dietz’s life, it is the quote above. He poured into SDSU’s baseball program like it was the most important endeavor in life. When speaking about Steve Fisher building the basketball program or Brady Hoke and Rocky Long building the football program, it is meant metaphorically. Jim Dietz literally built the baseball program with his hands.

Every person connected to his tenure can share stories of being sent to a construction site, a junkyard, or a discarded pile of lumber to pick up the building materials Dietz would personally refurbish or repurpose to add to the stadium, batting cages, clubhouse, or practice areas. Before recycling was cool, SDSU’s manager would sweep underneath the stands and collect discarded soda cans to raise the money needed for his projects.

“The obvious answer is that we watched him work hard, so that made us work hard,” 97.3 radio host and former Aztec baseball player Chris Ello told EVT. “But to me, watching coach Dietz work, most of us would honestly, at the time, would just sit back and shake our heads in disbelief. It’s just how incredible he was in terms of putting in whatever time was necessary to get the field ready, doing whatever was necessary to improve the clubhouse, improve the field conditions, improve the stadium. … Honestly, I just would shake my head in disbelief. I mean that only in the most remarkable way. It was just like, ‘look at this guy go.’ It was just amazing.”

Fear of failure stops most from pursuing their passion with the same intensity as Dietz. His pioneer spirit and embrace of the unconventional were responsible for one of the greatest feats in San Diego sports history, turning Tony Gwynn into a baseball player. How might sports in America’s Finest City have been different if Dietz had followed the beaten path and stayed focused on his already heavy workload instead of giving a basketball player on campus a baseball tryout? 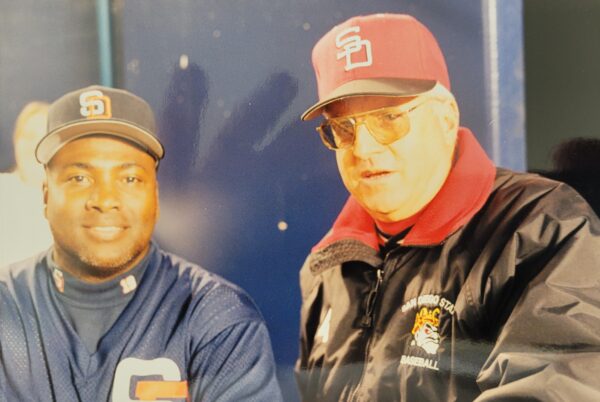 Years later, Dietz, ever the salesman, convinced Marshall Faulk, fresh off a second-place finish for the Heisman Trophy, to try his hand at America’s Pastime. Oliverio said Dietz told his staff that Faulk’s breakaway speed would make him an elite base runner.  Faulk practiced for a month but could not hit or field like those who spent their entire time working on that craft.

Ello, like virtually everyone who played for Dietz, has a tremendous affection for their former coach. Though Dietz’s entrepreneurial exploits on behalf of his program are legendary, only a small portion of the loyalty he inspired came from baseball. Dietz maintained a coach-player relationship with the team and ran a highly disciplined program. It was not until after his athletes left the program that they fully understood how much Dietz cared about them.

On top of all of his other activities, Dietz still found time to take a sincere interest in his former players’ lives after they moved on from SDSU. His attentiveness extended far beyond those who went on to play professional baseball. No matter their chosen profession, Dietz would be engaged in networking on their behalf. Long before Faulk coined the phrase “Aztec for Life” in his induction speech to the Pro Football Hall of Fame, Dietz already embodied the ethos.

This quality extended beyond his players. At SDSU, he also taught baseball classes. Oliverio was a pole vaulter on the track and field team early in Dietz’ tenure. During his senior season in 1980, Oliverio took one of Dietz’s classes. A decade later, Oliverio attended an SDSU game and approached Dietz afterward. Dietz not only remembered him but knew what sport he played and gave him a chance to join his staff.

“The lesson learned is: go out there and do your best,” Ello said. “Care about the people that you know, who are closest to you.  Care about the people that care about you. Your legacy is going to go on. His legacy is all of us that are out in the community, whether it’s in San Diego doing whatever job we have or wherever we’ve settled down with our families across the country. That’s his legacy. That’s what a coach’s legacy can be and ideally should be.”

In a day and age when dedication is increasingly only worth it if notoriety follows, the example of Dietz’s life stands out. Dietz accomplished much in the game of baseball, but the game never came close to paying back what he gave it. He was not the John Wooden of college baseball, his teams never made it past regionals, but Dietz nevertheless applied his genius and competed as if San Diego State Baseball was the greatest job on earth.

With the growing complexity of society’s problems and social media’s constant pressure to conform, there is a lack of creative, intuitive, problem-solving skills. To confront these challenges, what the world needs more of is men like Jim Dietz.

My earliest sport's memory involve tailgating at the Murph, running down the circular exit ramps, and seeing the Padres, Chargers and Aztecs play. As a second generation Aztec, I am passionate about all things SDSU. Other interests include raising my four children, being a great husband and teaching high school.
Tags: Aztecs, Jim Dietz, Marshall Faulk, SDSU Baseball, Tony Gwynn