“The Legislature hereby finds and declares that the University of California is the primary state-supported academic agency for research.”

The Donahoe Act of 1960 artificially created a tiered system of higher education in California. The law dictated that the CA State System would focus on teacher training, and the UC system would be tasked with research and awarding doctoral degrees. California lawmakers were motivated to pass the legislation because of the influx of new college students following WWII. The act was named after Assemblywoman Dorothy M. Donaoe, a remarkable Californian.

Donahoe overcame tremendous obstacles to become the catalyst for the shape education would take in the nation’s most populous state. She had a disability due to infant paralysis and asthma but worked with and around her disability to become the 11th woman ever to serve in the California State Legislature. Tragically, Donahoe died of pneumonia just three weeks before the passage of the act that bears her name. She was the first female legislator to die in office.

A year before the legislation was passed, a committee of university presidents and chancellors was formed to work out the precise form the new, tiered system would take. The political battle pitted UC Berkeley chancellor Clark Kerr and UCLA professor Dean McHenry against San Diego State College president Malcolm Love.

Having already succeeded in wrestling research-based doctoral programs away from the state colleges, Kerr and McHenry’s main aim in the committee was to ensure all of their political gains remained intact. President Love focused on just the opposite.

The Donahoe act, in principle, succeeded in creating a tiered system in higher education. Ironically, this artificial creation has been used as justification for SDSU’s exclusion from the Pac-12 conference for decades. Member institutions, their fans, and even the local San Diego media have turned their noses down at the State University at Campanile Drive, forgetting the academic gap between the schools was created by fiat, not merit.

It is through this clause that SDSU has built one of the leading research institutions in the nation. Since 1970 the Carnegie Foundation has ranked schools according to their research prowess. In the last ranking released in 2019, SDSU was an R2 “High Research” institution.  There is only one tier above it, and the university’s strategic plan aims for SDSU to attain R1 status by 2025.

Every UC institution has already reached R1 status except one, the University of California Merced. It is an R2 institution, just like SDSU.  Perception always lags behind reality. SDSU currently offers as high of an educational experience as any school in California.

Mirroring what the university has done as a whole, athletics at SDSU have forged their path to new heights. In the two marquee sports of Football and Men’s basketball, the school boasts the second-highest winning percentage in the country since 2010. Aside from these two nationally respected programs, SDSU’s soccer teams, women’s track and field, men’s golf, baseball, and a host of others routinely compete and defeat schools from the conferences who have slanted the playing field in their favor.

The world of college sports is changing as conference realignment has changed the landscape of amateur athletics. The most recent dominoes to fall were Texas and Oklahoma, which are leaving the Big XII for the SEC.  That move led to Big XII to add four teams. Three of them came from the AAC, which is currently courting members from other conferences to stay afloat.

In the middle of this storm, SDSU’s ship remains in great shape. With the loss of their top three teams, no matter who the AAC adds, it will be severely weakened. The MW is clearly the top Group of Five in the country. Whatever changes take place in the College Football Playoff, the Aztecs have never been in a better position to thrive.

On June 6th, 1963, less than six months before his assassinations, President John F. Kennedy delivered the commencement address at San Diego State (listen to it here). Kennedy was awarded an honorary doctorate degree before his remarks, so he addressed the class of 1963 as “fellow graduates.” His speech laid out the educational challenges facing America.

“What are we going to do by the end of this decade?” Kennedy asked. …“Our population is growing each decade by a figure equal to the total population of this country at the time of Abraham Lincoln just 100 years ago. Our education system is not expanding fast enough. … We’re going to have to build as many schools, college classrooms, and buildings in ten years as we did in 150 years. By 1970, we will need 7,500 PhD.s in the physical sciences, mathematics, and engineering. In 1960, we graduated 3,000.”

Kennedy sent a clear message that day.  He called for the expansion of doctoral programs in the United States at an institution that was prevented from doing so by the California State Legislature just three years earlier. Love and SDSU answered his call. Four years later, the school conferred its first Ph.D. to Robert P. Metzger.

What Kennedy did for the research engine at SDSU, the new Aztec stadium promises to do for the athletic program. As the price of providing scholarships increases, the revenue generated from the project should solidify the budget for years to come. SDSU football’s new home will improve recruiting, the fan experience, and the visibility of the program.

SDSU Mission Valley will change the trajectory of the entire university, not just athletics. SDSU’s current enrollment will grow by upwards of 15,000 more students. In addition, they will be learning in approximately one million square feet of new classroom and research space, which will invite more opportunities for innovation and investment in the school. In many ways, the new campus is finally fulfilling Kennedy’s vision laid out nearly 60 years ago.

“SDSU Mission Valley, and more specifically, the university’s Innovation District, … (is) an unprecedented opportunity for industry partnerships and growth for our research enterprise,” Cory Marshall, SDSU Director of Media relations, told EVT. “SDSU is at a once in a lifetime moment to propel ourselves closer to our goal of becoming an R1 research institution.”

Since 2000, SDSU has conferred 1,797 doctoral degrees. During the 2020-2021 school year alone, university researchers secured $140.6 million in grant funding. SDSU currently has a joint doctoral program with half the schools in the UC system, including all of the institutions in Southern California except one, UCLA. 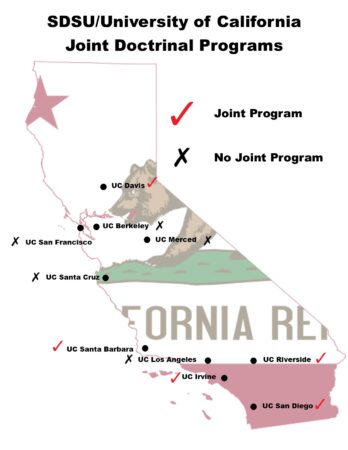 All of the progress the school has made towards becoming one of the top universities in the country would never have been possible without the partnership of the University of California San Diego. Ten out of SDSU’s 18 doctoral programs are joint programs with UCSD, including the first one awarded in 1967.

“From 2015 to 2020, SDSU and UC San Diego faculty co-authored 2,040 publications,” Marshall said. “This is the most of any CSU-UC pairing, according to our own internal tracking. The research communities of the two campuses are closely tied, highly productive, and greatly valued.”

It took a strong institution like UCSD, which was unafraid of the success of a regional school, to fully unlock SDSU’s potential. The schools’ partnership has been better for the city, the region, and the state, but their most famous collaboration was literally out of this world.

This past February, the Perseverance Rover landed on Mars. SDSU grad Anachristina Morino was part of the NASA team that pulled off the remarkable feat. She received her Ph.D. from SDSU in 2017 in Engineering Science. The doctoral program is a joint program with UCSD.

Athletically, SDSU is a similar partnership away from realizing its full potential. While there may have been valid reasons for UC Berkeley and UCLA to keep SDSU out of the PAC-12 in the past, the ever-changing nature of college athletics make those void. Money was not the primary motivation for Texas and Oklahoma joining the Southeastern Conference – both were already in the top 10 of revenue-making universities. Those programs joined because they could no longer compete with the SEC’s top schools in recruiting.

The Pac-12 is already losing the talent race among the Power Five conferences. Only five weeks into the college football season and the Pac-12 was all but eliminated from the College Football Playoff.  This year on the field, the conference is closer to the Mountain West than the SEC. Sports Illustrated even ranked the MW ahead of the Pac-12 after the non-conference season. About the Pac-12, it said, “When you have a .500 record against the Mountain West, it’s not going well.”

The conference already has enough viewers to justify an increase in their next television contract, but only if they can get their current fanbase excited about their product. In order to become relevant again, the Pac-12 needs to add teams capable of joining the national conversation. On the strength of what they have done in men’s basketball and football, SDSU already possesses a brand that extends from one coast of the United States to the other. With SDSU’s new stadium and inclusion in a new conference, the Pac-12 could add a Texas or Oklahoma-type program just like the SEC did. SDSU’s potential is there-they only need a partner to unlock it.

The roots of SDSU’s exclusion from the Pac 12 lie in the Donahoe Act of 1960 that artificially separated the UC and CA State schools. At their core, however, the institutions that make up these systems are kindred spirits, as UCSD and SDSU have proven since 1967. After decades of being an obstacle to SDSU’s success, for the sake of college football on the west coast, Cal and UCLA must change course and become their greatest advocates.

San Diego State has always been a university that charted its own path and excelled in unconventional and surprising ways. Displaying the same grit and entrepreneurial spirit, SDSU athletics will continue to forge ahead and excel even in the face of artificial obstacles.

It is the Aztec way.

My earliest sport's memory involve tailgating at the Murph, running down the circular exit ramps, and seeing the Padres, Chargers and Aztecs play. As a second generation Aztec, I am passionate about all things SDSU. Other interests include raising my four children, being a great husband and teaching high school.
Tags: Pac-12, San Diego State University, SDSU, SDSU Aztecs