Spring training gives the fan a great chance to learn about their favored program.

As fans wander around the team’s practice, or attend the various games for the six weeks prior to the beginning of the regular season, they have a chance to run into a variety of big league players, but more importantly, they see many of the organizations’ top prospects, various coaches, and unsigned players as well.

For the fan that has been around some time, many of the coaches bring back memories from their playing days of the past. Mark McGwire, for the San Diego Padres, is one example of that. Another great example, added this year, is that of Akinori Otsuka (Aki).

The San Diego Padres spring training facility in Peoria, Arizona, houses the entire organization from the Padres’ top star Wil Myers, all the way down to unsigned invitees clawing and scraping just to edge a way into the organization. Upon entering the Padres facility, it is noticeable that the camps are separated between the established and the strivers.

Immediately to the left, or east, of the entry sidewalk to the complex, are hundreds of San Diego Padre uniformed prospects, minor-leaguers, unsigned rookies, and players working out together. These men are playing inner squad games in hopes that they can, someday, make the short walk over to the west-side or pro camp. 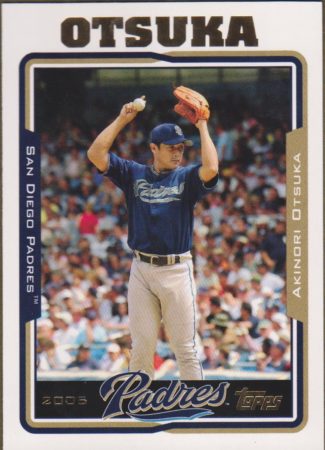 Aki Otsuka was a memorable part of the Padres’ organization, for a short amount of time. Otsuka, and his bright red-orange glove came to San Diego in 2004, after playing six years in Japan for the Kintetsu Buffaloes and the Chunichi Dragons, where his main role was that of closer. In Japan, he saved more than 20 games four times, including 35 for Kintetsu in 1998, which was a Pacific League record.

In 2004, he was immediately and successfully installed into the set-up role between Scott Linebrink and Trevor Hoffman. That year was truly a magical season for Otsuka and would prove to be his best season in the majors. Aki had a low 90’s, four-seam fastball and a hard, late-breaking slider. Utilizing a slight pause in his windup and his highly effective slider, Otsuka reach an impressive 87 strikeouts in 77 innings pitched. This helped him achieve an amazing 1.75 era in 73 games, third best in the National League in 2004. (That same year, Jake Peavy led all major league starters in ERA with a 2.27). Otsuka did not allow a home run in his first 32 and 2/3 innings pitched. Aki was an integral part of a 2004 Padres’ club that is considered, comparably, as among one of their successful seasons. Despite finishing third in the N.L. West, the Padres finish 87-75 for a .537 percentage. The improvement of 23 wins from the 2003 season (64-98) is the best improvement in Padres’ history.

After 2004, Aki’s stat line would never reach the same impressive levels. He still pitched well for the Padres, and helped them win the weak N.L. West in 2005. (The Padres threatened to be the first sub .500 team to win a division, but managed to beat the Dodgers on Sept 30. to at least guarantee a .500 season.) The club went on to be swept by the Cardinals in the playoffs and finished off Aki’s pitching career with the Padres.

In 2006, Aki was part of the best trade in Padres’ history. The Padres sent to the Texas Rangers Otsuka, starting pitcher Adam Eaton, and minor league catcher Billy Killian. In return, the Padres received Adrian Gonzalez, pitcher Chris Young, and outfielder Terrmel Sledge. In retrospect, the trade seems like an obvious win for the Padres, but at the time, Gonzalez was looking like a bombed prospect and was blocked out of playing time by Rangers’ first baseman, Mark Texiera.

Chris Young, the fly ball pitcher, was a danger for the hitter friendly ballpark in which the Rangers played. Adam Eaton had pitched serviceably over the previous two years and seemed like a good fit for the Rangers. Furthermore, it was assumed that maybe the National League hitters were catching onto Aki’s deceptive delivery, and that he could return to his amazing 2004 numbers in the American League, where he hadn’t been seen. Nevertheless, the trade extremely benefited the Padres for many years to come.

For the Rangers, Akinora did have some resurgent success. In the 2006 season he was installed as the closer and achieved 32 saves with a 2.11 ERA. After 2006, Otsuka started to have arm issues including tightness in his shoulder, which landed him on the D.L. in 2007 and elbow surgery in 2008.

Eventually, Akinora Otsuka returned to Japan as a player/manager for the Shinano Grandserows and as a pitching coach for the Chunichi Dragons.

Aki created many ties to the current Padres’ organization since joining the club in 2003.

First of all, Aki is and was a great teammate and had a great attitude that many players who played with him appreciated. Trevor Hoffman stated, “He’s just not full of himself, he’s just a good dude, a really good dude.”  Speaking of Trevor, a great moment and an ode to Akinora’s appreciation for San Diego is demonstrated in the first ever World Baseball Classic in 2006. Aki returned to San Diego as a pitcher for Team Japan. Upon entry into the game, in the 8th inning, the song ‘Hell’s Bells’ was played over the loud speakers. Aki stated that this was a demonstration of appreciation for his great friend, Trevor Hoffman, and the city of San Diego. In the game, Otsuka recorded a one and two-thirds inning save as Team Japan defeated Cuba 10 to 6.

He then continued to use the entry song as a closer for the Texas Rangers. Otsuka stated, ““It is out of respect to Hoffy, I am very comfortable in this role because of Hoffman. He taught me how to prepare and respect being a closer. Mind control, and how to forget.”  Another tie to the Padres’ organization is the fact that A.J. Preller, the clubs general manager, was a member of the front office of the Rangers when Aki played there. Of the current situation in which Aki will work for the Padres organization, and their impressive prospect-filled minor league bullpens, and as a PCL scout for the Japanese Chunichi Dragons, Preller states that, “Aki brings a lot to the table…”.

For Otsuka, this is a great opportunity to further his coaching career by gaining valuable experience coaching the American game. Padres esteemed pitching coach, Darren Balsley, states, “It’s hard not to have a good relationship with Aki; he’s just such a great dude. But he can be intense when he needs to be. He’s going to be a good coach. There’s no doubt in my mind. A very, very good coach.”

So once again, San Diego fans can keep their eye on the charismatic and affable Akinori Otsuka. Fans can either travel to El Paso to see a Chihuahua home game, or better yet, see them in Las Vegas when playing the 51’s. Maybe, they can go watch a University of San Diego Toreros baseball game and catch Mr. Otsuka watching his son playing baseball as a freshman this season. Or, and most favorably, maybe Aki will star in another one of Corky’s Pest Control’s hilarious videos!

(The original featuring Aki aired on T.V. and is titled, “Aki vs. Ants, Picnic!” and is a great part of Padres nostalgia).

Michael Clark is a Las Vegas historian with a Bachelor’s Degree in U.S. and Nevada history from the University of Nevada, Las Vegas. He is a third generation Padres fan who has “paid attention” ever since his family returned to the states from military service in Germany in the early 1980’s. His grandparents move to Chula Vista in the 30’s where they bought a house on K Street. Both parents graduated Chula Vista H.S. in 1959. During his Dad’s tenure in the Air Force, 26 years, multiple times he, with his Mother, brother, and sister, made their home in that house. His Grandfather, Grandmother, Mother, and Father are all buried at Ft. Rosecrans, Pt Loma where they get to see every Padres home game right across the bay. It is the authors goal to bring many of the great tales from the Padres storied past to light for many of the new fans and to remind those who may have lived through it. Most articles will also feature baseball cards of the players mentioned. This gives an added peek into the past and provides some nostalgia. You can follow me on twitter at gwynn19@wcoastcapper
Tags: Aki Otsuka, Akinori Otsuka, Padres, Padres Japanese Pitcher, Padres Otsuka, San Diego Padres