If San Diego had known, it might have paid more attention.

When BYU rolled into town for a late November clash with the Aztecs, there was no way of knowing that would be the last event by a hometown team at SDCCU Stadium. No one could have foreseen it would take nearly 20 months for the elected officials to fulfill the will of the citizens who elected them by selling the property to the university. Nor could anyone have known the city’s bureaucrats would choose to balance their budgets by foregoing maintenance of the property while the city council and mayor dragged their feet in doing their jobs.

If given the opportunity, tens of thousands of more San Diegans would have poured into the Murph to give the place where Tony Gwynn and Junior Seau called home a proper send-off. The Aztec faithful who were in attendance unwittingly witnessed history.

They saw the last two turnovers created by the home team. Fittingly, both came by the skillful hands of a San Diegan. Tariq Thompson strip-sacked BYU QB Zach Wilson and recovered the fumble. Thompson later intercepted Wilson for the last interception in the stadium. Another local product, Matt Araiza, made the final field goal. Carson Baker, from Helix High, had the honor of taking the final knee to mark the final win by the Aztecs. However, the most enduring memory of the game was the final touchdown scored in the stadium by a local team.

With 2:23 left in the first half, the Aztecs took over at their own 39 with two timeouts left. On third and six with under 30 seconds left, Baker found another San Diego prep star, Jesse Matthews, for seven yards and a first down. Having burned both of their timeouts and Matthews making the reception inbounds, Baker rushed everyone to the line and spiked the ball with 17 seconds left. Rocky Long gave his freshman signal-caller one more shot at the end zone, and Baker delivered. He sent a bullet over the middle in between a linebacker and safety to Daniel Bellinger for the final touchdown of the game.

It was unknown to the general public until this week how significant that final score truly was.

“BYU, my sophomore year, I felt like I was having a heart attack on the field,” Kothe said as a guest on The SDSU Football Podcast. “I started feeling light-headed. I never felt my heart race like that before. Dan (Bellinger) had just caught a touchdown, or I think I might have passed out on the field. …”

“That is the last touchdown (at SDCCU stadium), I believe. It might have saved my life.”

Kothe was on the field, running around that entire final drive. While fans’ hearts raced in excitement, Kothe’s heart pulsated frighteningly. The recovery from a subsequent exploratory surgery that found nothing amiss took the momentum away from the sophomore wideout’s promising career.

“The procedure happened after the BYU game and before the New Mexico Bowl my sophomore year,” Kothe said today. “I got the procedure. Everything checked out normal. Then this past fall camp, I felt it again and had to sit out for a week.”
“It impacted my career in that it was a really scary event. … This fall camp was one of my bests in that I felt like I was making plays had the best camp yet of my career. Then I had to sit out because I had another episode and had to go through all the tests again to make sure I was good before I could be cleared.”

What’s next for Elijah Kothe

This past year, Kothe’s 31 receptions matched the total from his previous three seasons. The coaching staff afforded him the opportunity to return in 2022, but he decided to move on from the team in part because he had a second scare with his heart during fall camp last year. While he has not completely closed the door on playing again, he is weighing a couple of opportunities to get into coaching. As a coach, he will look to emulate his position coach at SDSU, Hunkie Cooper.

“I really can’t say enough good things about coach Cooper,” Kothe said. “He is high up there on the reason I chose San Diego State. Just how he conducts himself as a person. … He would care for you beyond football, which is something that’s just really special. … He’s really like a father figure to a lot of us in the (wide receiver) room. He’s just legit, and he’s someone I aspire to be like when I become a coach.”

Kothe came to SDSU as part of the 2018 class that will go down as one of the best in program history. He was roommates with Daniel Bellinger, Jesse Matthews, and Connor McBride. They formed a unique and special bond that will likely last a lifetime. He is another great football player at SDSU that is an even better person.

“They’re awesome,” Adam Hall said when asked how special the players are. “They’re awesome, and I tell this all the time, ‘What makes us different, makes us special.’  They embrace that. … Guys come here because they want to play football here. They don’t come here because of the facilities, and that’s what makes our guys special because they appreciate exactly what they have, and they work hard every single day to hold up what we have built here, which is a winning, tough football team.”

Kothe’s saga is another reminder that life is fragile, and football is about more than winning and losing. The Las Vegas native never reached the NFL heights on the field many believed possible when he enrolled at SDSU, but exceeded all hopes off the field, developing into a man everyone connected to the university can take pride in. As he enters the next chapter of his life, he will pay forward what his coaches and teammates have invested in him. The next community Kothe chooses to enter will be blessed because of his presence.

“Carson Baker’s pass to Daniel Bellinger” is the correct answer to the trivia question, “What was the last touchdown scored by the Aztecs in the old stadium?” When San Diegans ask that over the years, perhaps, they will also remember that was the play that may have saved Elijah Kothe’s life. ‘ 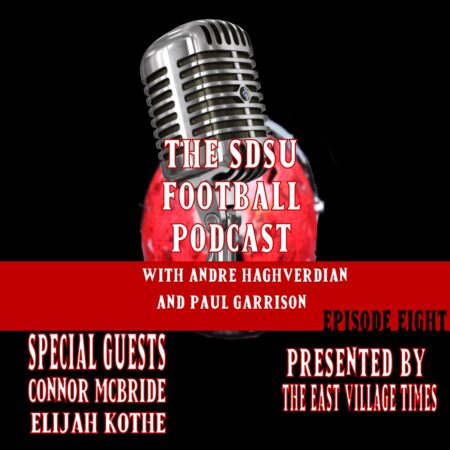 Listen to the entire conversation with Elijah Kothe here.

My earliest sport's memory involve tailgating at the Murph, running down the circular exit ramps, and seeing the Padres, Chargers and Aztecs play. As a second generation Aztec, I am passionate about all things SDSU. Other interests include raising my four children, being a great husband and teaching high school.
Tags: Elijah Kothe, SDSU Aztecs, SDSU Football