We are approximately three weeks from Opening Day, and the Padres projected infield consists of the new star Eric Hosmer at first base, Freddy Galvis at shortstop, Chase Headley at third, and most likely, Carlos Asuaje at second base, with some consideration for Jose Pirela and Cory Spangenberg at that spot as well.

In that projected infield for 2018, there are five combined Gold Gloves, four for Hosmer and one in 2012 for Headley. With this new infield, there is a hope Hosmer can produce offensively as he has done the last two seasons. Headley is on the decline, but there is still some value with his bat, and Galvis is still coming into his own as a valued bat at shortstop. However, it is on the defensive side of the ball that the Padres look to be most improved.

Over the past three seasons, three different players have taken the bulk of the reps at shortstop in Alexi Amarista, Alexei Ramirez, and Erick Aybar.

Freddy Galvis may be another one-year band-aid as he will be a free agent after this season and the Padres hope Fernando Tatis Jr. is ready by next season. Be that as it may, Galvis offers more with the glove (and probably bat) than the previous three shortstops.

When using Ultimate Zone Rating (UZR) to track how many runs Galvis saved compared to an average shortstop, he beats them all. In fact, among the four players mentioned, he is the only one that has posted a positive UZR in each of the last three years. 2016 with Ramirez at shortstop was a disaster as he posted a -19.6 UZR, one of the worst in the league. That season, Galvis boasted one of the best at 15.1, a whopping 34.7 difference in UZR.

Asuaje and Headley also have positive UZR in their last three seasons (two for Asuaje in the big leagues) compared to the 2015 -2017 Padres starters in those positions. The graph below shows the difference, with only Hosmer rated lower (Wil Myers had a really good first season at first base in 2016 and Yonder Alonso held his own in 2015, while Hosmer struggled in 2016). 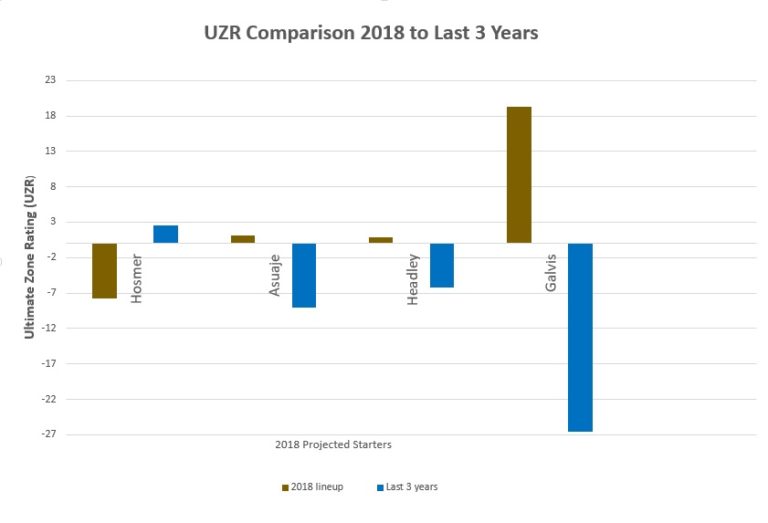 The difference between Galvis and the previous three years of Padres shortstops is staggering. Even with a slight dip in his defensive metrics in 2017, Galvis destroys the rest of the field. This will be an instant upgrade at shortstop not seen since the peak of Everth Cabrera’s time in San Diego (2012-2013).  At second base, Asuaje, in his short big league career, outperforms Jedd Gyorko’s 2015 numbers and Ryan Schimpf’s 2016 campaign.

At third base, Chase Headley has been more steady with the glove than Yangervis Solarte’s 2015 or 2016 season at third and much more so than Spangenberg’s 2017.

The Padres have finished next-to-last in team UZR in two of the past three seasons. In 2017, they posted a -34.5 UZR as a team, 29th in the league. The numbers were also similar for Defensive Runs Saved and Fielding Percentage, finishing in the 20s in those categories as well. Some of the struggles of 2017 were chalked up to youth and inexperience. Here is how the 2018 projected infield stacks up against the 2017 bunch (with Asuaje remaining the same): 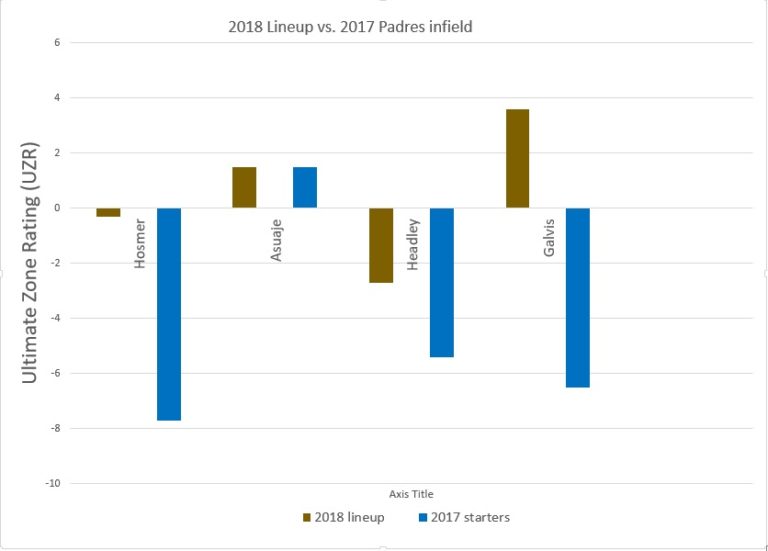 This time, Hosmer wins out over Myers. Myers had a tough time at first base for most of 2017. Hosmer is more of a steady hand, with 2016 being the outlier (which is the only one of the past five years he did not win a Gold Glove). Cory Spangenberg posted a -5.4 UZR at third in 2017 while Headley had a -2.7 for the Yankees, still in the negatives, but significantly better than Spangenberg. Again, the difference between Galvis and Aybar is remarkable. There is no question Galvis is an upgrade defensively from Aybar or any shortstop the Padres have had in a few years.

This should be music to the ears of pitchers like Luis Perdomo and Clayton Richard, who both had a groundball rate over 59% last season (league average is around 44%).

If each player plays to the trend of the last few seasons, this infield will be significantly better defensively than 2017, or even in the last three or so years. Things can change. Injuries or unforeseen struggles can happen. Baseball is a funny game after all, but this infield is projected to be immensely better. Plus, we hope to see improvement from a blossoming Carlos Asuaje, who already has put up encouraging defensive numbers.

Native of Escondido, CA. Lived in San Diego area for 20 years. Padres fan since childhood (mid-90s). I have been writing since 2014. I currently live near Seattle, WA and am married to a Seattle sports girl. I wore #19 on my high school baseball team for Tony Gwynn. I am a stats and sports history nerd. I attended BYU on the Idaho campus. I also love Star Wars.
Tags: Carlos Asuaje, Chase Headley, Eric Hosmer, Freddy Galvis, MLB, Padres, Spring Training, Wil Myers