It used to be a regular thing to play all 162 games in a season. Cal Ripken Jr. did it 10 times in his career.

Playing every single game has only been done nine times among all Major League Baseball players over the past three years combined.

Playing all 162 games is more of a badge of honor than anything else. A player isn’t normally viewed as less valuable if he plays more than 140 games, but doesn’t play in every single one. Just like a starting pitcher making 33 or 34 starts, playing 162 games is way to display that you show up everyday. You are a competitor and you are tough enough to play through injuries. Injuries happen, but over the course of a six-month, 162-game regular season, you might have to play games when you aren’t feeling 100%.

Only five players in all of Major League Baseball played all 162 games last season, and the Padres acquired two of them this offseason. Eric Hosmer and Freddy Galvis showed up every single day to the ballpark, ready to play for the Royals and Phillies respectively. There is valor in that number. Does it help them boost their stats or earn extra money? Maybe not. It certainly puts their teams in a better position to win with them penciled in the lineup every night.

I am a big fan of having guys reliable enough to where you can use a sharpie to pen their names in the lineup. They have a certain spot and they are in it day in and day out, even when not at 100%. Both of these players showed how resilient they are last season. I am sure at certain points last season, they could have mailed it in and gone on the shelf for even 10 days. Most do. Another honorable fact is that both of these players did it for teams who finished with losing records. You want guys like that on your team. 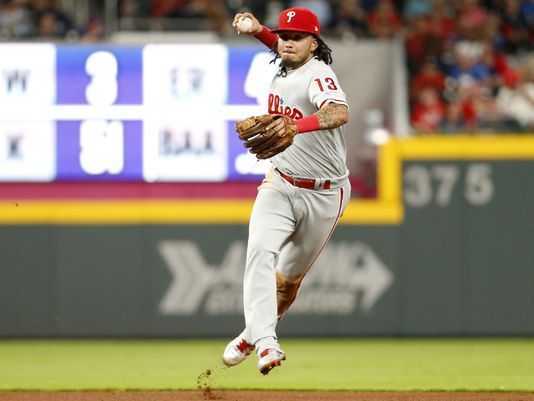 Eric Hosmer, on top of playing every game last season, played in 158 games each of the previous two years, and in his career has averaged 150 games played over the first seven years. He has been reliable, which adds value to a clubhouse. It’s one thing to hit 25 home runs while batting .318 and win a Gold Glove, which Hosmer did all of that last year. But it’s even better to do it showing up everyday, no disabled list, no excuses, just playing ball.

Freddy Galvis  has also been extremely reliable in the last few years. Before he played every game of 2017, he, like Hosmer, played 158 games in 2016. He has averaged 157 games in his last three seasons. That’s a great quality to have in a shortstop. You would need to go back to 2007 when Khalil Greene roamed Petco Park’s infield to find another shortstop with that kind of reliability at that crucial position. Greene was the last Padres shortstop to play more than 150 games.

Now, obviously things could change this season. One bad slip on the bases or awkward headfirst slide could alter everything, but we don’t want to think like that.

Having two guys like this on the infield is huge. Both can be a veteran presence in a clubhouse full of young guys who need to be shown how the game is played at the major league level. Half of the Padres’ projected 2018 infield played every single game last season. That can be contagious. Other guys who have some bumps and sore muscles might look at those two and see guys punching their time card everyday and showing up to work, rain or shine, four hours of sleep or eight. It’s important for these young prospects to know that there is value in playing everyday, even when not at 100%.

The Padres have not had a player play every single game since Adrian Gonzalez in 2008. Wil Myers led the team last season with 155 games. If Myers can stay at that level, along with these two sticking to their recent trends, the Padres will have a solid, steady lineup to build around, and that may result in a few more wins than expected, who knows? Having your best players play everyday tends to do that.

Native of Escondido, CA. Lived in San Diego area for 20 years. Padres fan since childhood (mid-90s). I have been writing since 2014. I currently live near Seattle, WA and am married to a Seattle sports girl. I wore #19 on my high school baseball team for Tony Gwynn. I am a stats and sports history nerd. I attended BYU on the Idaho campus. I also love Star Wars.
Tags: Cal Ripken, Eric Hosmer, Freddy Galvis, MLB, Padres, San Diego Padres