The Padres have a tough decision to make as Austin Hedges is swinging a hot bat and Francisco Mejia was just acquired from the Indians. Which of these two young catchers will be in the teams future plans? Taking a look at Hedges’ numbers of recent, there is no easy answer.

When the Padres traded for Francisco Mejia recently, many expected that he would be the replacement for Austin Hedges at catcher in the near future.

At the very least, there was consensus that the Padres had a dilemma on their hands as far as playing time at the catching position was concerned.

In the weeks following the trade, things have only become more complicated, because Austin Hedges has started to hit so well.

His glove has always been one of the best in Baseball, and his average pop time of 1.89 seconds ranked first among backstops in 2017 according to Statcast. I even wrote about his defense in this article last winter, about how impressive it really is.

His bat has always been the question for the defensive wizard.

Take a look at some statistics of the top-performing catchers in baseball over the last thirty days, courtesy of Fangraphs:

That’s some pretty good company, to say the least. It’s incredible that he’s produced nearly a win worth of value in WAR over only the last thirty days! His wRC+ of 166 ranks first on the Padres during the same period of time. For all the talk of Myers and Margot recently, Hedges has been highly productive in his own right. Of course it makes sense to be skeptical of a thirty-day performance, because it could be unsustainable, right? We clearly need to see if Hedges can realistically continue to hit this well, so let’s get into some more specific data.

The first question to ask about his hitting, is whether he’s simply getting lucky on batted balls? His BABIP has been .348 during the last month, while his BABIP last season was only .260 — so we can reasonably expect him to slow down somewhat in terms of hitting. He’s essentially getting a fair amount more lucky than last season on batted balls, unless of course he’s hitting the ball harder, and his increase in BABIP is due to a higher quality of contact than he was having previously.

Hedges has increased his average exit velocity on base hits, from 90.3 mph until July 2nd, to 93.0 mph in the last thirty days since. So while he’s gotten more lucky on batted balls in play, that has in part been because he’s simply hitting the ball harder than he used to. Some regression to the mean is inevitable for Hedges’ hitting, but he has also legitimately improved in that regard. Clearly, he has improved as a hitter over the course of the last month.

Furthermore, Hedges has begun to walk more than he ever has, with a rate of 7.5% this season being the highest of his career thus far. During the last month he’s also only struck out 17.8% of the time, which is the lowest rate he’s ever had thus far in the major leagues. His .397 on base percentage is also quite impressive, along with his ISO of .273 during the last thirty days.

Like many hitters, he’s also improved by hitting pitches to all fields more often. Take a look at his Statcast spray chart up until July 2 on the left, in comparison with his spray chart during the last month: 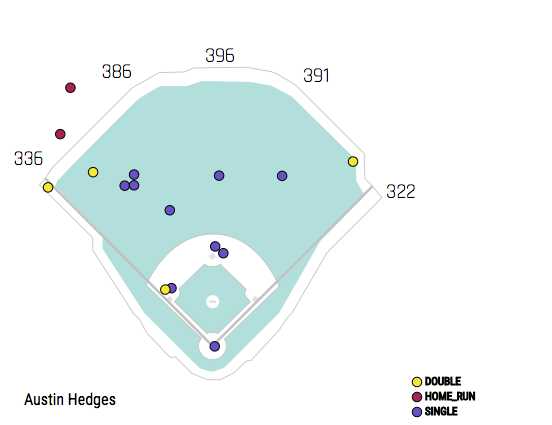 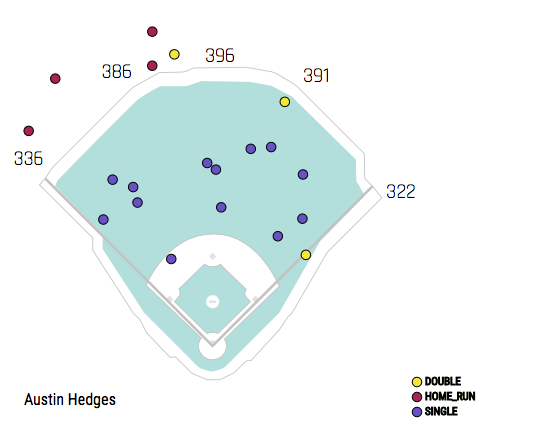 Clearly his power plays to the pull side almost exclusively, but he’s really found more success on other hits by spraying the ball all over the field. Doing so also speaks to his improved luck on batted balls — by hitting the ball everywhere, he made it harder for teams to shift in a particular direction against him, and also improved his ability to hit pitches all over the strike zone.

If there’s any doubt about his defensive abilities, here is the Statcast data from 2018 on catcher pop-times among catchers who’ve made at least ten attempts to throw out baserunners:

It’s obvious that he’s one of the best around at releasing the ball and getting it to second base to hose runners, so the Padres are surely very pleased with the work he’s done behind the plate. Of course his defense goes beyond throwing out baserunners, though. Hedges has been praised by the Padres’ coaching staff and pitchers for the work he’s done behind the plate for the team. A lot of the value he brings to the table cannot be measured by statistics, because they are intangibles.

The Padres will have some tough decisions to make when Francisco Mejia is ready for the major leagues, which could be as soon as September. With the way Hedges has improved his hitting, it would make little sense to move him off catcher, and he’s always going to be better than Mejia defensively at that position. Maybe Mejia’s 80-grade arm would be better suited to right field, if Hedges keeps this up. Whatever happens, the Padres have an improved hitter in Austin Hedges, and that’s a valuable asset regardless of how they handle the catching situation in the years to come.

A sophomore at Willamette University in Oregon, Conrad is majoring in Spanish but is also a writing center assistant for other students at Willamette. He has been a Padres die-hard his whole life and hopes to bring comprehensible statistical analysis to the site.
Tags: Austin Hedges, Austin Hedges Padres, Padres, Padres Catching, San Diego Padres

No need to choose, keep both. Mejia’s bat can get in the lineup for DH and LF. Hedges catches 90 – 100 games and Mejia catches 60 – 70 games. This winter I protect and retain Austin Allen at least one more year before trading him.

This type of work load keeps both guys fresh throughout the season and effective during the post season. The decision does not have to be made until its time to sign Hedges long term. #NoHurry

As you mentioned in the article, a small sample size really is of no importance. Hedges is a gold-glove caliber catcher, that is not in dispute. Let’s see him put up decent numbers over a year or two, then we can talk about improvement. As for Mejia, we’d just be guessing about his defense. What we do know is that the Indians tried to trade him once before (Lucroy vetoed the deal), and they’ve experimented with him at 3B and in the OF, and that Mejia was resistant to the idea (Terry Francona’s words). We also know that he has… Read more »

Yeah as many of these write ups seem to be keen on, you guys are focusing on the positives in isolated instances- there’s no questioning his defense or abilities when the bat is not in his hand. I’d mainly be concerned about giving away at bats in the 8 and 9 when the rest of the lineup is not really holding its own. Hedges is welcomed to be a mediocre hitter if we can figure out how to build a lineup again.