In a city too often starved for special sports moments, Aztec Nation’s embrace of SDSU basketball is one of the top phenomena in San Diego sports history.

Men’s basketball was left for dead, basically a forgotten entity until Steve Fisher resurrected it.

Out of a plethora of possibilities, it is nearly impossible to point to one moment where fans truly became “Fisher Fanatics.” However, if there is one, it is SDSU’s semifinals matchup against the top seed, Wyoming, in the 2002 Mountain West Conference Tournament.

As SDSU Men's basketball looks to win its conference-leading 7th tournament title this week, here is a look back at its 1st championship in 2002. pic.twitter.com/gP5HyugW69

2001-2002 was the first season in school history to average more than 5,000 fans per game.  6,165 fans poured into Cox Arena (now Viejas) on a nightly basis. When the final buzzer sounded against Wyoming, thousands of San Diegans poured into Vegas for the championship game and 14,347 saw the final. While the attendance numbers were boosted because the Aztecs were playing the host school, anyone present that Saturday would tell you SDSU’s fan base brought most of the energy.  Rewarded for making the trip with a court storming, a love affair was born.

The Aztecs have been the class of the Mountain West since. They have earned 13 trips to the finals, winning six championships. Both marks are tops in the conference. UNLV is second in final appearances with eight. Their last trip came in 2013. New Mexico is second all-time in tournament championships with four. The last victory for the Lobos came in 2014.

This week, SDSU will be looking to make its 15th straight trip to the tournament conference semifinals. If the Aztecs can cut down the nets in Vegas once again, they will even their all-time mark in the championship game at 7-7.

Below is a ranking of the six Aztecs teams that won the Mountain West Tournament. 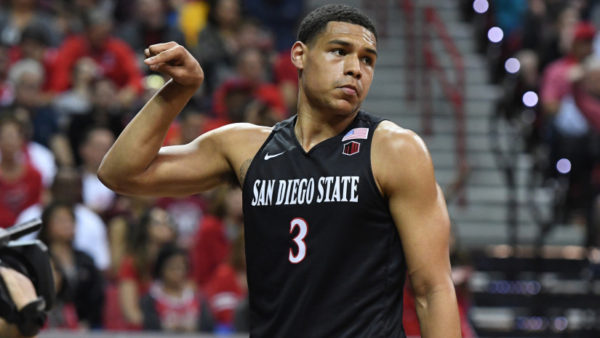 The talent on this team was exceptional and tops those further down the list. The 2017-2018 Aztecs rank as the worst team to ever win a championship because, despite their individual skill, the group lacked chemistry. Whatever negatives this unit may have had, they did something Xavier Thames’ 2014 team and Malachi Flynn’s squad 2020 failed to do, win the conference tournament.

This team made Brian Dutcher a champion in his first season as head coach. Behind 28 points from Trey Kell, SDSU defeated New Mexico in the final. The most memorable game of the tournament was the semi-final matchup against Nevada. The Wolfpack ranked #22 in the country were dismantled by SDSU in a game that was not as close as the 17 point margin of victory.

As described in detail above, the 2001-2002 season was the clearest sign that major college basketball had come to San Diego. No longer just an event that happened on TV, March Madness had found a home in America’s Finest City.

“Playoff Kawhi” is legendary. The first glimpse the world had of Leonard’s ability to elevate his game in critical moments came during the championship of the 2010 MW tournament. Leonard poured in one of the best games in tournament history, scoring 16 points and grabbing 21 rebounds as the Aztecs defeated host UNLV.

Even with a player like Leonard leading the way, this version of the Aztecs is only fourth on the list of all-time champion teams. Just a freshman, Leonard was still adjusting to the college game. This title game came shockingly close to never happening. DJ Gay hit a pair of clutch free throws in the quarterfinals to lead SDSU to a narrow win over Colorado State that finished the year 16-16.

With all due respect to the Sweet Sixteen teams or the 30-2 Aztecs, this iteration was more dominant in Mountain West play than them. They won an outright regular-season title and followed it up with three wins in Vegas. Only two teams on this list can say that. 2006 was the first. Their three conference losses on the season came by an average of five points.

Marcus Slaughter’s performance in this tournament was the best in program history. All other MVPs had average games followed by great ones. Slaughter was dominant every time he stepped on the court. He put up 17 pts, 19rbs against CSU, 16pts, 14rbs against UNLV, and 16pts, 13rbs against Wyoming. His sensational three-game run is not spoken about enough.

Like the 2005-2006 team, last season’s group was able to win both the regular season and tournament titles. They earned the nod over that team because of the hardships they endured playing a COVID season with all of the protocols. The 2021 team also had more overall talent on the roster especially inside with Nathan Mensah.

The tournament nearly ended before it got started. SDSU needed a second-half comeback to defeat Wyoming. After the victory over the Cowboys, the Aztecs won two games they controlled from start to finish. The only thing left to do was cut down nets and do the “trust fall” in an awkwardly empty arena with only the gathered media in the stands.

2010-2011 was the height of Mountain West Basketball. It was during this season, the universities in the conference were placed in the eye of the nation. Fittingly, the MW’s best program in its existence won the last marquee game of this signature season.

SDSU entered the tournament as co-champs of the Mountain West, sharing the regular-season title with BYU. Though the Cougars defeated the Aztecs twice in the regular season, when it mattered most, Kawhi Leonard topped Jimmer Fredette. SDSU dominated BYU in the final. The game gave rise to one of SDSU’s best photo series with Kawhi smiling and clapping Fredette off the court, and James Rahon celebrating in his own unique way in the background.

My earliest sport's memory involve tailgating at the Murph, running down the circular exit ramps, and seeing the Padres, Chargers and Aztecs play. As a second generation Aztec, I am passionate about all things SDSU. Other interests include raising my four children, being a great husband and teaching high school.
Tags: Aztecs Basketball, San Diego State Aztecs

Came up just short, but if your heart wasn’t racing as Pulliam let go of the floater, you don’t like sports.