According to the urban dictionary, a rolling ball of butcher knives is “a treacherous, nasty, dangerous person or thing you should steer clear of.” The phrase is not typically heard often when talking football with players and coaches. Then again, SDSU defensive coordinator Kurt Mattix is not your ordinary football coach. The mastermind behind the dominant Aztecs defense the past two years, who head coach Brady Hoke has called one of the best football coaches he has ever been around, thinks outside the box, and devises unconventional formations and schemes that keep offensive coordinators up at night.

“It’s about knowing the strengths and weaknesses of our guys and putting people in positions we think can be successful,” Mattix told EVT during Episode 10 of The SDSU Football Podcast. A level of gamesmanship is fueled by showing specific packages once or twice on film, making opposing teams prepare for it all week, and then frustrating them by not utilizing it in that game.

One of those unconventional packages evident throughout the 2021 season was occasionally utilizing defensive tackle Jonah Tavai in a stand-up role a couple of yards behind the line of scrimmage pre-snap.

“If we can get him a little bit of a head start and running [towards the line of scrimmage], all of a sudden, he’s a rolling ball of butcher knives that can cause a lot of trouble running through the A and B gaps.”

Mattix credits Greg Mattison, the defensive coordinator at Michigan during Hoke’s tenure as head coach in Ann Arbor, for creating that package. A defensive quality controls coach at Michigan under Mattison, Mattix realized the athleticism Tavai possesses closely resembled the players that package was created for at Michigan and felt it would translate well. Unsurprisingly, Tavai made some of his best plays of the season in that role.

Mattix’s coaching history dates back to the early 2000s, and his first encounter with Hoke came while he was a Graduate Assistant at Ball State when Hoke was hired as head coach in 2003. After becoming the defensive coordinator at Saint Joseph’s College (Division II) in Indiana in 2008 and running the 3-3-5 defense for the first time, Hoke invited Mattix to attend spring practices at SDSU in 2009 to learn more about the defense.

“I consider [Hoke and coach Rocky Long] the godfathers of this system,” Mattix said, attributing the advent of the defense to the idea of taking a group of random athletes and fitting them into the puzzle of the best 11 players on the field. He was eager to learn from both during those spring practices and figure out “different ways to incorporate blitzes with man coverage principles behind it.” Mattix is quick to point out, though, that ultimately, the success of a defense “is about the kids buying in and playing hard, and not so much all about the scheme.”

Another football coach that Mattix looked up to was in his own house. His father, Bob “Bubba” Mattix, was the defensive line coach at Valparaiso from 1994 through 2000 and coached at numerous high schools in Northwest Indiana. In May 2019, Bubba was inducted into the Indiana Football Hall of Fame and revered by many in the area as a strong leader and mentor. He, sadly, passed away in January at the age of 72.

In Hobart, lights tend to shine brightest on Friday nights. Tonight, they shine on Don Howell Field at The Brickyard in honor of Hall of Fame coaches Steve Balash and Bubba Mattix.
Until we meet again, their lights will continue to shine in the hearts of all who knew them. pic.twitter.com/O56DC0Lgp6

Mattix’s goal for 2022 will be to keep the defense dominant despite having to replace three All-Conference starters plus two primary linebackers. Here are three questions related to the front six (defensive line and linebackers) that San Diego State will need to answer as they prepare for the start of Spring Camp.

How will the defensive line replace Cameron Thomas’ production?

Thomas, the Mountain West Defensive Player of the Year and All-American, declared for the NFL Draft after his junior season. It is unlikely that any player on the 2022 roster, individually, will play as dominant as Thomas did in 2021.

Given the expertise of the Aztec coaches, Mattix and Hoke (who says he will always be a defensive line coach at heart), they will figure out a way to overcome the loss. New defensive line coach Justin Ena, who has yet to be officially announced by the school, will also play a big role. “We can’t find a true replacement for [Thomas], but we can use two guys to replace one guy,” said Mattix.

The first piece of the puzzle was retaining Thomas’ sidekicks on the defensive line last year, Jonah Tavai and Keshawn Banks. Both elected to return for super senior seasons and will look to take one more leap in their final collegiate season.

Three new players on the defensive line will be called upon to replicate Thomas’ production. Two of the players are transfers Justus Tavai (Jonah’s brother) and Deven Lamp. While Tavai played defensive tackle at Hawaii, Lamp is a true defensive end in a three-man front scheme.

The third newest member of the defensive line is Garrett Fountain, who played linebacker last year for San Diego State. In a backup role to linebacker Caden McDonald, Fountain found ways to contribute whenever he stepped on the field, collecting six tackles for loss and three sacks (tied for fourth on the team with McDonald) in limited opportunities. His biggest moments of the season came in the triple-overtime victory over Utah in week 3, collecting two sacks and receiving a 80.8 pass-rush grade from PFF.

Coach Hoke announced Fountain’s move to defensive end at his weekly press conference on Wednesday, citing the lack of depth at defensive end and the influx of depth at SAM linebacker with Cooper McDonald and Darrell Masaniai joining Caden McDonald as the main reason. Hoke also believes Fountain has the burst and athleticism to play the DE position that their defense requires and has the ability to gain the extra ten pounds needed to get to the 250lb mark they would like.

Between two returning super seniors, two transfers, and one former linebacker, the Aztecs have the talent and scheme to replicate the production from Thomas in 2021.

Will Caden McDonald take the leap and become the next Aztec linebacker vying for the NFL Draft?

Last season, McDonald was used extensively as the fourth pass rusher on the defense, shifting the typical 3-3-5 formation to a 4-2-5. While only collecting three sacks, he constantly harassed quarterbacks with 19 hurries and earned First-Team All-Conference for the second consecutive year.

Some expected McDonald to join his fellow teammates and declare for the NFL Draft, but he opted to return for a super senior season. Whether that decision was fueled by the disappointment of losing to Utah State in the conference championship game, the excitement of opening Snapdragon Stadium, or the opportunity to play with his younger brother, who transferred to San Diego State, the Aztecs’ defense is a huge benefactor of that decision.

As a team captain, McDonald showed his true leadership skills with the way he conducted himself on the field, the sidelines, and at press conferences. Given the expected youth of the 2022 team, having McDonald at the head of the senior leadership committee will be monumental.

Mattix noted this past week during his weekly press conference that they project McDonald as an “off-the-ball” linebacker at the next level, who would line up three to five yards behind the line of scrimmage and read and react to the offensive play rather than as a straight pass rusher. They will be using spring camp to help him create that identity given the role he played last year.

If McDonald continues the upward trajectory and fine-tunes his skillset, do not be surprised if an Aztec player takes home the Mountain West Defensive Player of the Year award for the second straight year.

Which of the young linebackers will rocket up the depth chart and push the upperclassmen for playing time?

Based on experience and last year’s depth chart, the starters at linebacker heading into spring camp are seniors Caden McDonald, Michael Shawcroft, and Seyddrick Lakalaka. Cooper McDonald, a junior transfer from Washington, is in his first year in the program but has the experience at the Pac-12 level to be right up there with those three.

A group of young linebackers will look to fill the void left by departing players and find roles for themselves in the two-deep coming out of spring camp. Here are three guys to look out for.

Vai Kaho – the junior from Reno turned heads last year with his performance in spring camp and was a standout player on special teams during the season. He played 44 snaps against Air Force in week 8, his only significant game time on defense, earning a poor 47.7 overall grade from PFF. Mattix complimented Kaho’s performance in winter conditioning and his improved endurance, recalling that the linebacker struggled to “compete consistently throughout workouts” last year.

Zyrus Fiaseu – the redshirt freshman from Las Vegas is entering his second spring camp in the program after enrolling early last spring. The coaching staff is looking for Fiaseu to become more consistent with his technique and understand how hard and physical he needs to play on every snap. Fiaseu was ranked as the fourth-best recruit in Nevada by ESPN in the class of 2021 and chose San Diego State over Oregon and Washington State.

Dominic Oliver – the redshirt freshman who came to the Mesa with the goal of breaking the all-time sack record in the program will need to get on the field as early as possible if he hopes the achieve that lofty goal. Mattix noted Oliver could be part of the “22” defenders (two-deep) with a specialty role in certain personnel packages. “He has really good twitch coming off the edge and can make offensive linemen uncomfortable in space,” said Mattix. He added that Oliver needs to continue to get stronger and understand the physical element of playing outside linebacker. “Rushing the passer is just half of what our linebackers have to do on any given snap,” he added.

Spring Camp starts on February 28 and concludes with the Spring Game on March 24. 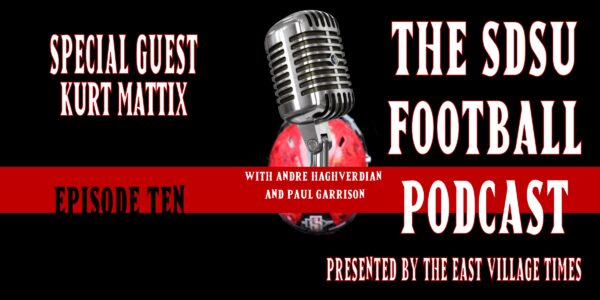 To hear the entire conversation with Kurt Mattix, click on any of the links below