Joey Lucchesi has taken a big step forward this year in comparison to his performance in 2018. Here’s a look at how he has evolved as a pitcher to be more successful.

During the 2018 season, Joey Lucchesi was a decent contributor to the Padres rotation, making 26 starts with an ERA of 4.08.

He was worth exactly 1.0 WAR according to Fangraphs, which is fine but certainly not fantastic pitching from the southpaw. However, in his first nine starts this year, he’s already been worth 0.9 WAR, nearly equaling his production from all of 2018.

How has he taken his game to the next level? Through several adjustments to his pitching, he has vastly improved.

So he’s incorporated a Cutter into his arsenal this year, which is new according to Statcast. He’s throwing the trademark Churve slightly more often, but the most significant change is the addition of his new Cutter, which has decreased his Sinker usage. One of the primary concerns about Lucchesi has always been that he only has two pitches, while starters are traditionally expected to have three pitches to be successful. While it’s tough to say that his Sinker and Cutter are completely distinct pitches, the addition of a Cutter to his repertoire has certainly seemed to keep hitters more off-balance in 2019.

As many other pitchers tend to get better at as they become more experienced, Lucchesi has had much better command of his pitches this season than during the last. Here are a couple of heatmaps of the locations of his fastballs in 2018 first, followed by his 2019 fastballs:

Lucchesi threw a lot of his 2018 fastballs over the heart of the plate, while this season he’s done a much better job of placing it on the edges of the zone in three different locations. It’s key that he’s better located the pitch he throws the most often because it’s helped set up his usage of his infamous ‘Churve.’

Furthermore, Lucchesi has also vastly improved his command of the Churve this season. Below are another couple charts that first show his 2018, and then his 2019 locations of Churves thrown by the lefty:

This time, he’s burying his Churve to hitters better than he did last year, which has been key to his success. Batters hit .226 off the pitch in 2018, and are only hitting .215 against it in 2019. So Lucchesi’s development has been aided by his better location of every pitch in his arsenal. However, there’s still more that he’s improved, which is evident in Statcast data.

The batted ball data of Lucchesi’s opponents provides strong evidence for his improvements this season in comparison to his work in 2018. Let’s take a look at some of the numbers:

So hitters have barreled the ball less often, at lower average exit velocities, gotten on base less often, and pounded the ball into the ground with more frequency in 2019 than in 2018 versus Lucchesi. The only thing he hasn’t done better is strikeout hitters more often, but that’s a relatively small detail in the context of his success in nearly every other area of pitching.

Additionally, new Statcast data on pitch movement has identified Lucchesi’s Churve as being among the most unique pitches in baseball. That much was already known, but the Statcast data has also shown the pitch to have exceptional movement. Among qualified pitchers, it rates as the second-most different from other pitches of the same type. The Churve is identified by Statcast as a changeup, yet has 9.7 more inches of vertical movement than the average changeup thrown league-wide. Below is a graph that shows the pitch movement of pitchers throughout MLB, along with Lucchesi’s Churve which is the green dot at the upper-left corner of the box with his name: 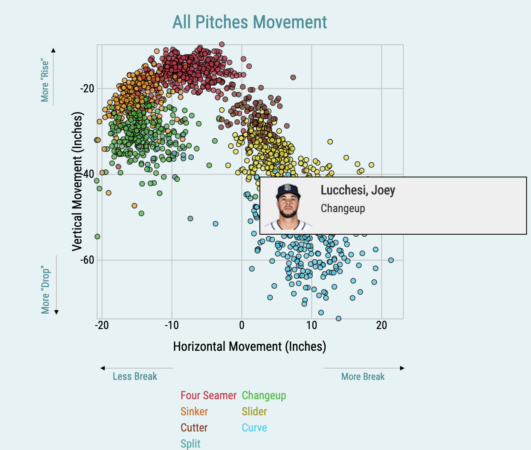 See all the other green dots to the left of Lucchesi’s? Those are all of the other changeups thrown by other major league pitchers, which is pretty interesting to see. The uniqueness of the pitch is very clear in this chart, and it has allowed Lucchesi to be successful with it because hitters haven’t likely seen anything like a Churve before.

Throughout the last two years, Joey Lucchesi has become one of the most valuable pitchers in the Padres’ rotation. Especially this year, he’s been even better than he was in 2018. The Padres have witnessed him improve his command of all the pitches in his repertoire, and that’s been key to his evolution this season. Above all else, his unique Churve has continued to amaze, and the latest Statcast data makes that clearer than ever.

A sophomore at Willamette University in Oregon, Conrad is majoring in Spanish but is also a writing center assistant for other students at Willamette. He has been a Padres die-hard his whole life and hopes to bring comprehensible statistical analysis to the site.
Tags: Joey Lucchesi, Joey Lucchesi Statcast, Padres 2019, Padres Lucchesi, Padres MLB, San Diego Padres