After a fairly quiet few weeks in terms of notable roster moves, the Padres made a rather significant roster move on Saturday afternoon.

Following a disappointing beginning to his big league career, right fielder Hunter Renfroe finds himself once again with the Triple-A Chihuahuas.

Going into the 2017 season, Renfroe was riding high after a sensational end to what was a fantastic year for the young outfielder. After helping the Chihuahuas all the way to the Triple-A championship with a 130+ wRC on the season, Renfroe had an even more successful taste of the big leagues with a 213 wRC+ over his first 35 big league at bats. However, this year has been an entirely different story.

Now with over 400 plate appearances under his belt this season, Renfroe finds himself with a wRC+ of just 89. Sure, Renfroe has hit his share of home runs, with 20 so far on the year, but his poor overall offense and struggles on defense have made him worth exactly 0 fWAR on the season. When you add to that a low walk rate, just under seven percent, and a strikeout rate that has hovered in the upper 20s all season, and it’s clear to see the organization feels that Renfroe needs to figure things out in Triple-A.

All this begs the question: Can Hunter Renfroe figure out the strike zone in Triple-A? Will facing Triple-A pitching help Renfroe with his plate discipline? It’s obvious that playing in the Pacific Coast League is enough to help any player’s confidence, but is it enough for a player to make real, tangible changes in his game? The answer to that question remains to be seen, but it is clear that the Padres have not seen the development from Renfroe that they have wanted to over the last few months as he has progressed through his first full major league season.

For our own purposes, let’s try to decipher what the Padres saw, or didn’t see, in Hunter Renfroe as the season progressed. Let’s start with how often Renfroe hits the ball hard, which is one of his most obvious standout skills. The following graph shows Renfroe’s 10-game rolling hard hit percentage for the season.

Renfroe has obviously been a pretty volatile player throughout the season, and that’s even more evident in looking at the peaks and valleys of Renfroe’s hard hit rate. However, there are some interesting trends here. After each peak, Renfroe has seen a rather consistent few week decline followed by a few week rise in his hard hit rate. His latest peak at the end of July has been followed by perhaps the biggest decline of his hard hit rate so far this season, as it fell from 50 percent to just 11 percent in a matter of weeks. This has been accompanied by a similar increase in his percentage of soft hit balls, which is not a recipe for long-term success. As a point of clarification, this doesn’t measure his hard hit rate for the entirety of the season, but rather as a snapshot of the specific section being looked at, in this case 10-game samples.

Taking things a step further, let’s look at perhaps Renfroe’s biggest weakness: his lack of plate discipline. To do this, let’s start by looking at Renfroe’s strikeout and walk rates as the season has progressed. 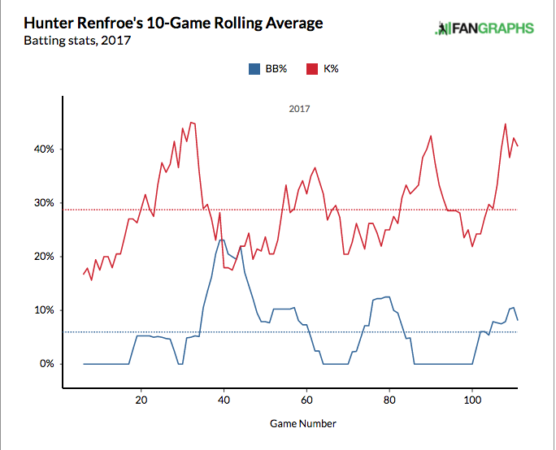 So the strikeout and walk rates tell a similar story to the hard hit rates. Renfroe has certainly had his peaks and valleys as the season has progressed. What’s ironic here is that while Renfroe is striking out a rate higher than almost every other point of the season, his walk rate has climbed above his average for the season as well. It appears there is nothing too out of the ordinary here.

Here is where things get a little weird. While Renfroe has been rather consistent in swinging through pitches and, more importantly, swinging through pitches outside of the strike zone, his zone percentage has seen a rather significant change recently. Over the last few weeks, Renfroe is seeing more pitches inside the zone than he has at any other point this season. So shouldn’t he be doing much better at the plate rather than much worse? Well, it seems that just isn’t the case for some reason.

Despite seeing a greater amount of pitches inside of the strike zone, Renfroe has seen a decline in his hard contact rate and a rather significant decline in his overall offensive production. There doesn’t really appear to be any obvious solution to find in the numbers. Renfroe is probably always going to be a guy who struggles with his plate discipline.

However, with the raw power he has, he can get by if he can manage his plate discipline. Over the last month or so, it’s evident that Renfroe has been unable to limit his strikeouts and limit his number of bad swings on pitches outside of the zone. Until Renfroe can make more consistent contact on good fastballs inside the strike zone, he isn’t going to be an everyday major leaguer. Hopefully, facing Triple-A pitching triggers something for Renfroe, but this may just be the kind of player he is. And with that lack of plate discipline, and albatross level defense in right field, the type of player he is may not be a big leaguer long-term. It all hinges on his plate discipline going forward.