I struggled between Garvey and Rickey Henderson, especially since Garvey spent the first 14 seasons of his career as a Dodger. I gave Garvey the nod because he was a crucial part of the Padres’ first World Series appearance in 1984. Garvey certainly wasn’t cheap, as the Padres paid him about $6.8 million over five seasons (according to Baseball-Reference, that is the equivalent of about $15 million today). Garvey was worth it in the fact that he became an instant leader on a ballclub still learning to win.

And they did win. In 1984, they did so 92 times on their way to the playoffs. Thanks to Garvey’s heroic home run, the Padres stormed back against the Cubs to reach the World Series. Garvey hit .400 in those five NLCS games, winning the series MVP.

Over five seasons with the Friars, he hit 61 home runs with a 100 OPS+ and 3.8 oWAR. He, of course, got his number retired by the Padres, the only one with that honor on this list.

“Goose” was another intricate part of the 1984 National League Champion Padres. Gossage signed a free agent deal worth about $4 million just before the 1984 season. He went on to have 25 saves with a 2.90 ERA and a 124 OPS+. He had a save in the NLCS and appeared in two games in the World Series against Detroit.

His exceptional career didn’t stop there. He ended up pitching four seasons for the Padres, racking up 83 saves in 197 games. His 2.99 ERA and 123 ERA+ over that time are substantial career numbers Padre pitchers today still strive for. He was twice an All-Star in Padres brown as well. He was later inducted into the Hall of Fame but as a Yankee. Still, he is fondly remembered by Padres fans for helping them win their first NL pennant.

Fingers had a very similar story to Gossage. He came to the Padres in 1977 after four straight All-Star seasons with Oakland. He lived up to the hype. He signed a 6-year, $1.6 million contract. For four seasons, he was a constant presence in the back of the Padres’ bullpen. He earned 108 saves with a 3.12 ERA and 111 ERA+.

He was an All-Star in 1978 as a Padre when he led the entire league with 37 saves. He appeared in 67 total games with a 132 ERA+. That was his second consecutive season leading Major League Baseball in saves. He also was inducted into the Hall of Fame, except as an Athletic.

This name might be a surprise to some, but make no mistake, this was a great sign by the Friars. 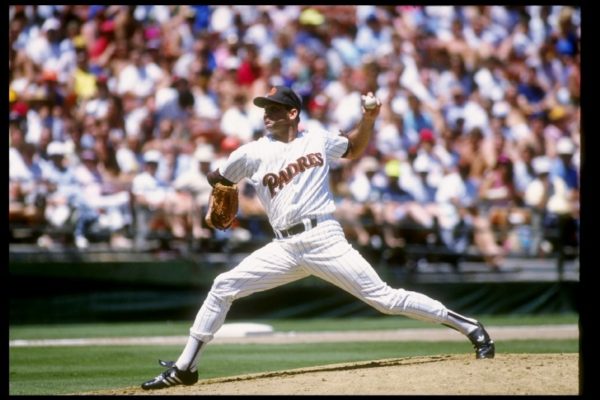 The Padres signed Hurst in 1989 for a five-year deal worth just over $11 million. In his first season with the Padres, he led the National League with ten complete games. He threw 244 innings with 15 wins and a 131 ERA+. Hurst delivered time and time again and was worth that big contract, which does not happen often.

Over his four seasons (his fifth lasted just two games) with the Padres, Hurst averaged almost 14 wins with a 3.27 ERA and a 113 ERA+. He posted only under 16 WAR in those four years, for an average of about 4 WAR per season. In today’s comparison, that is better than Yu Darvish.

Loretta might be one of the most underappreciated Padres player in franchise history. He came to the ball club in 2003 on a four-year, $9.75 million contract. He was worth every dollar. He showed up with a .295 average over his previous two seasons, and he exceeded that in San Diego. His previous career-high in home runs was seven. He hit 13 in 2003 and 16 in 2004. This was also while he maintained a stellar .325 average and 130 OPS+ over that span. He was a six-win player in 2004 with a 6.3 oWAR. That is similar value to what Joey Votto and Kris Bryant did this last season.

He declined a bit defensively at second base, but he was serviceable. Plus, with that bat, who cares? Over his three seasons in a Padre uniform, Loretta batted .314 with a 121 OPS+. He deservedly got an All-Star bid in 2004. What’s overlooked is that he helped lay the groundwork for the 2005 National League West champion Padres team. That year, he hit .280 and was a leader in the clubhouse. He had four hits and two RBI in that Division Series against the Cardinals.

Loretta totaled 11.3 WAR over those three years before he was dealt to the Red Sox. He enjoyed his time with San Diego so much; he is now working for them as a special assistant. This was as solid a free agent signing as the Padres have had, especially in the Petco Park era.

Good article. My only beef is no Rickey Henderson. Even though this was toward the end of the year, he still had an OBP of .399 in 2.5 seasons, with a 4.1 WAR. He also set the MLB record for most runs scored as a Padre. Yes, Garvey had his dramatic ’84 home run, but pound for pound, Rickey’s signing was better.

I agree, Greg. Rickey was great. I just gave the nod to Garvey just for that home run honestly. Could’ve gone either way.

Hopefully the Royals decide they can’t live without Hosmer and make an offer he can’t refuse.

Hosmer is a BELOW the mean for first basemen. The Padres apparently are wanting to make him the worst FA signing in Padre history. SEVEN YEARS!?