Who are the best players that spent just one year with the Padres?

One-year acquisitions have a unique place in a baseball team’s history. They can aid in a championship run and then be gone as quickly as they came, without making much of a mark in that franchise’s record books, given their short stay.

These players arrived by trade or as a free agent, but their impact was felt just the same either way. Whether it be to bolster a championship-caliber roster or an unexpected solid player who was then later dealt at the peak of their value, these one-year wonders come in all shapes and sizes. As we list off the top one-year players in Padres history, we took into consideration the players’ statistics while in San Diego as well as their star power before playing their one season with the Friars.

Kimbrel was acquired as the final piece of that frenzy that was the 2014-2015 offseason, which brought Wil Myers, Justin Upton, Derek Norris, and Matt Kemp into town as well. Coming into the 2015 season, everyone knew who Kimbrel was- a flame-throwing, unorthodox closer from the Atlanta Braves. He was coming off of four straight seasons of at least 42 saves and three consecutive seasons with an ERA below 1.75. The former Rookie of the Year was selected to four All-Star teams before putting on a Padres uniform.

Although he did not have the top-notch season many expected, Kimbrel was still one of the best closers in the game with the Friars. The Alabama native had a .258 ERA with 39 saves, which was fourth in the National League and a 145 ERA+. In June of 2015, he allowed just one earned run in 10 appearances. He also became the fastest pitcher ever to achieve 200 saves during that white-hot month. Unfortunately, he was not selected to be an All-Star in what would be one of just two seasons where he didn’t get the nod in his 10-year career.

Kimbrel was acquired via trade with just one year left on his contract, and after that season, Kimbrel was traded to the Boston Red Sox, where he won a World Series in 2018 and has earned three more All-Star appearances. He is building what could be a Hall of Fame resume, now with the Chicago Cubs.

Another closer makes the list, and it is one that was not even in San Diego a full season. Rodney was acquired as a free agent before the 2016 season, with the Friars looking to replace the aforementioned Kimbrel. The flashy Dominican was well-known for his postgame celebration after earning a save that drew attention from all over the baseball world. Before coming to San Diego, the then-39-year-old had recorded at least 37 saves for four different franchises, including a major league-leading 48 for the Seattle Mariners in 2014.

The three-time All-Star got right to work in San Diego, not allowing a single earned run until June 21, his 25th appearance of the season. As the Padres began to rebuild, Rodney pitched in just 28 games before being traded to Miami on June 30, for a young pitcher named Chris Paddack. He finished his brief San Diego stint with a 0.31 ERA and a does-not-compute 1,279 ERA+. The 2019 World Series champion allowed just that one earned run in a Padres uniform.

With a 1.04 ERA in the first half of the season, Rodney earned his third All-Star bid, but by then, he was a member of the Miami Marlins. The All-Star Game itself was in San Diego at Petco Park that season, and he received a warm reception as he was introduced. Bouncing around several times since that year, Rodney found a home with the Nationals this past season and helped them win their first World Series title.

Piazza needed no introduction when he arrived in San Diego before the 2006 season. The city was abuzz after the 12-time All-Star signed a one-year deal as a free agent. At 37 years old as a catcher, having already put together a Hall of Fame career, many wondered if the former Dodgers and Mets great had anything left in the tank.

He sent San Diego into a frenzy when, in his first at-bat as a Padre, he hit a home run, electrifying Petco Park. He experienced a rejuvenation in San Diego after having an underwhelming final season with the Mets in 2005. During the Hall of Famer’s one year in a Padres uniform, he hit 22 home runs with 3.0 WAR and a .843 OPS while posting a 121 wRC+. He received a hero’s welcome when the Padres played at Shea Stadium in New York, and he greeted the crowd with a two-homer game against fellow Hall of Famer Pedro Martinez, receiving a rare curtain call as an opposing player. He had some vintage Piazza moments in a Padres uniform and earned his 400th career home run as a member of the Friars.

Piazza’s 2006 season was above-average at the plate, which was impressive given his age and having played catcher for 14 seasons before coming to San Diego. With the Friars, he caught 99 games.

That would end up being Piazza’s last full season of his career. He had a brief stint with the Oakland A’s in 2007 before announcing his retirement. He was inducted into the Hall of Fame in 2016, 10 years after playing for the Padres.

Certainly, the Padres did not bring in Smith for his star power. The former Ole Miss quarterback had played seven seasons between the Rockies and Athletics, with his best season amounting to 2.3 WAR.

Some people forget just how solid Smith was for the Padres in 2014. After arriving via trade before the season, his first impression as a Friar was a pinch-hit, game-tying home run on Opening Night against the Dodgers. He served as a veteran presence in the clubhouse for the Friars and played in 136 games, with a .807 OPS, 134 OPS+, and 3.4 WAR, which ended up being a career-high for him. The 11-year vet also set a career-high in walks and OPS+, giving the Padres a consistent bat in an otherwise punch-less lineup.

The then-31-year-old was among the leaders in just about every offensive category for San Diego, including home runs (second), RBI (third), average (first), OPS (first), and WAR (first). He was the Padres’ best hitter in 2014.

The Padres dealt Smith after the 2014 season to the Seattle Mariners for Brandon Maurer. Although he never achieved the high marks he set with the Friars, Smith remained a steady presence in the lineup for the Mariners and Orioles until his final season in 2017, with a 111 OPS+ in the three years after leaving the Padres. 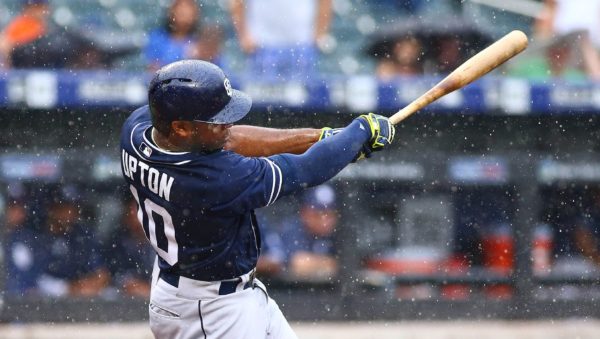 Upton, like Kimbrel, came in during the shopping spree set up by general manager A.J. Preller. The Virginia native indeed came to San Diego with name recognition, having already earned two All-Star bids and finishing fourth in MVP voting in 2011 with the Diamondbacks. The Braves agreed to trade Upton to the Friars in the final year of his deal before he got very expensive.

By Upton’s standards, his 2015 season in San Diego was underwhelming. However, he led the entire squad with a 4.3 WAR, a 119 OPS+ and .790 OPS. He was the most consistent hitter in the Padres’ lineup that year. He earned himself his third All-Star selection, being the lone representative of the Friars. He got to play with his brother Melvin Jr. while in San Diego, as they did previously in Atlanta.

Upton’s 4.3 WAR still has not been topped by a Friars player in the four seasons since.

As expected, Upton hit free agency and was way beyond the Padres’ price range, signing with the Detroit Tigers for six years, $132.75 million. He is now with the Angels and was selected to his fourth All-Star team in 2017.

Sanders came to San Diego as a result of the firesale that ensued after the Padres made the World Series in 1998. He was part of the deal that sent Mark Sweeney and Greg Vaughn to the Cincinnati Reds before the 1999 season. He was an All-Star in 1995 but was mostly inconsistent leading up to that season in San Diego.

The 1999 season signaled in a new, darker age for the Padres, who were 74-88 a year after playing in the World Series. Sanders played 133 games and was a nice compliment to bats like Tony Gwynn and Phil Nevin in the lineup.

After the season, the Padres traded Sanders away to the Braves and received Bret Boone and Padres great Ryan Klesko in the process. The outfielder won a World Series with the Diamondbacks in 2001.

There is no debate on who is the best one-year player in Padres history. Brown came in having earned three All-Star bids previously and finished second in Cy Young voting just two seasons prior with the Florida Marlins. He was the missing piece for the Padres to win the National League pennant in 1998.

He instantly became the ace of the Friars staff. He only had one month of the season where his ERA was above three. The fourth overall pick of 1986 posted nine double-digit strikeout games for the Padres and finished the season with 257 total, which is the single-season franchise record. His 9.6 fWAR is by far the highest single-season total by any Padres player, hitter or pitcher.

The Atlanta native was selected to his fourth All-Star team and helped the Padres win 98 games. His true value was evident during the playoff run. He out-dueled Hall of Famers Randy Johnson and Tom Glavine to get the Padres to the World Series. He had a 2.52 ERA in six playoff appearances. He willed the pitching staff to the N.L. championship.

Brown became a free agent after the season and signed a contract with the rival Dodgers, where he was selected to two more All-Star teams. However, he truly made his mark on the Padres franchise forever, in just one season.

Native of Escondido, CA. Lived in San Diego area for 20 years. Padres fan since childhood (mid-90s). I have been writing since 2014. I currently live near Seattle, WA and am married to a Seattle sports girl. I wore #19 on my high school baseball team for Tony Gwynn. I am a stats and sports history nerd. I attended BYU on the Idaho campus. I also love Star Wars.
Tags: Craig KImbrel, Justin Upton, Kevin Brown, Mike Piazza, Padres, Reggie Sanders, San Diego Padres