With two more games completed, what have we learned about this SDSU Aztecs team?

1. Mitchell’s aggressiveness is invaluable to this team.

When Mitchell is trying to get into the lane and finish through contact, he is at his best. He can shoot the 3-ball well, but that weapon should be used to stretch defenses and make it easier for him and others to finish inside. When Mitchell is playing aggressively, he has the skill to hit tough shots over taller opponents.

This benefits the team in several ways. First, players are more likely to draw fouls when they attack the basket. Drawing fouls results in getting easy points at the free-throw line, and sometimes even more importantly, getting the other team’s best players into foul trouble. That happened during the first game of the series, as both Grant Sherfield and Desmond Cambridge had to miss stretches due to foul trouble.

This season, Matt Mitchell has drawn more fouls per 40 minutes than any other Aztec, dating back to at least the Kawhi Leonard days, per KenPom. His rate of 7 fouls per 40 minutes currently ranks 28th in the nation. If he keeps that up, he’ll force many opposing coaches to make some tough calls.

The other effect is that teams start to focus on Mitchell on his drives and post-ups and send double teams at him. When that happens, Mitchell is skilled enough to find the open man. The first game stats in the series didn’t show it, as Mitchell had 4 turnovers and 0 assists. The tape tells a different story, however, as there were multiple times where Mitchell would drive and hit Mensah in the dunker spot, and Nevada would foul to prevent the easy points.

If Nevada doesn’t foul, that’s an easy dunk for Mensah. When they do foul, it compounds the foul problem mentioned earlier, and even if Mensah only makes one free throw, the opportunity to get into the bonus sooner means other guys will get more free throws as well. To his credit, Mensah made both of these foul shots to extend the lead late.

In the second game, Mitchell had three assists and two turnovers, which reflects his ability. The Box Creation stat is the best measure of his ability, where through 11 games, Mitchell is second on the team in open looks created for teammates (per 100 possessions) at 5.6. Gomez leads the team at 5.77. Mitchell belongs inside the paint as much as possible.

2. Nathan Mensah is the team’s Most Valuable Player

Nathan Mensah had a slow start to the season. It’s to be expected after missing almost a full year with a pulmonary embolism. During that time, he could not play games and not practice with contact at all. As a defensive big, that contact and timing is important, so it was expected that it would take him a few games to get up to speed.

His defensive versatility makes him a very unique player. Most guys standing 6’10” can have at least some success protecting the rim. Mensah is a dominating force down low, as evidenced by his 12.8 block percentage, good for 12th in the nation. Mensah can do more than that, though. His ability to move his feet and keep up with opposing point guards gives the team a nice option to change what the opponents see. In the first game against Nevada, the Aztecs would hedge and recover for most of it. On the final 2 Nevada possessions, the Aztecs switched the ball screens, similar to how they played against Colorado State. Nathan Mensah kept up with Grant Sherfield on both occasions.

The first, Nathan corralled Sherfield into taking a tough floater, and in the process, drove Sherfiled into Mitchell, who drew the charge. The floater missed regardless.

The second, Nathan forced Sherfield into a step-back three that missed short, likely due to Sherfield having to change the angle of his shot to get it over Mensah’s 7’5″ wingspan.

There are problems with switching if done too much. Early in the first game, Nevada was able to take advantage of guards like Pulliam being matched onto their bigs. However, when done sparingly, it will make the opponents pause and think and will likely result in a lot of tough shots.

On the offensive end, Mensah is also becoming more and more of a threat. Mensah finished 10-18 from the field with 31 points in the two games, none bigger than the 2 free throws he drained at the end of game 2 with only a one point lead.

3. The coaches are still adapting to their personnel, for the better.

On two separate occasions earlier in the season, the coaches decided to inbound to Trey Pulliam in a situation where the opposing team was obviously going to foul. The first time, Pulliam knocked down two at the line, and the Aztecs left with a win. The second time was the first game against Colorado State, where Pulliam missed the front end of a one-and-one, and Colorado State ended up winning the game. Pulliam took a lot of heat for that, but the coaches made the bigger mistake.

It’s one thing to have faith that your starting point guard can make a free throw or two. There’s nothing inherently wrong with that. It’s another thing to inbound to a guy who is a career 66.7% free throw shooter to end the game when you have three other players who have shot over 80% from the free-throw line over their career. Especially when one of those three players connected on 94.4% of free throws last season (Gomez.) A team needs either their best free throw shooter or their most clutch performer to ice a game, ideally both, at the line. Pulliam is neither of those, so he shouldn’t have been put in that situation. His best skill is his passing, so his role should be as the inbounder in that situation.

To their credit, though, the coaches adapted. To end the Nevada game, Pulliam inbounded the ball and chose who to pass to between Mitchell, Schakel, and Gomez (the 3 players with career percentages over 80%.) 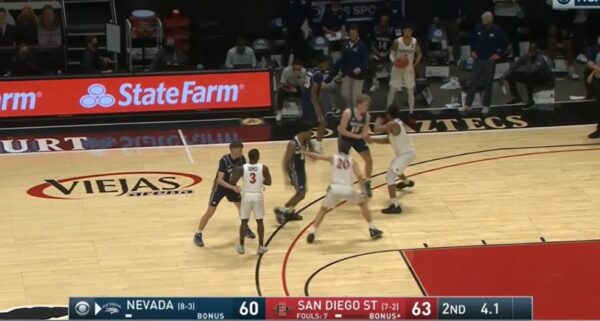 Pulliam successfully got the ball to Mitchell, who hit two free throws to ice the game.

The second was a different story, where the ball got stuck in a corner on an inbound. Coach Dutcher decided that in that particular situation, Nathan Mensah would have the best chance of catching the pass, so he drew up a play to get the ball to Nathan. It’s questionable because Nathan isn’t the best free-throw shooter, nor is he the most clutch player. However, none of that matters if the other team steals the ball on the inbound. So it was a calculated risk that paid off this time.

Some coaches get stuck in their ways and are very stubborn, to the point where it cost the team multiple games. It is safe to say that Coach Dutcher and staff are not that way.

4. The offense is starting to take shape

Last season the offense would usually start with some Mover-Blocker concepts to get the defense moving and result in a pick and roll with Malachi Flynn and Yanni Wetzell. It was a great system for last year’s team because all the shooters present to space the floor, Yanni’s ability to finish inside, and Malachi as one of the best decision-makers in the league.

This season’s team still has a lot of shooters and has a couple of guys that can finish inside, but they don’t have the same quality of point guard that they had last season. So for the offense to reach its potential, some changes need to be made. Those changes are starting to take shape.

There will always pick and rolls in the offense, but there were many post-ups over the last two games. Analytically speaking, post-ups are pretty inefficient. There are always exceptions, though, and this team may be one of them.

Plus, analytics love passing out of post-ups. If a player can post up and get the ball to a cutter or 3 point shooter (as was described with Mitchell and Nathan earlier), those tend to be great shots.

The Aztecs have run 126 post-ups so far this season and have scored 126 points on those possessions (when including passes.) That mark is more efficient than 80% of the nation’s post-up attempts. It has also been more efficient than their plays out of the pick and roll or isolation.

They do tend to turn the ball over quite a bit, but hopefully, as they get more comfortable with it, they cut down on the turnovers.

5. Conference season is going to be tough

On paper, the Nevada games should not have been as close as they were. Coming into the series SDSU was 14 point favorites for both games. Losing either of them would’ve been terrible for SDSU’s at-large resume, as Nevada would’ve been a quad 3 loss, which is hard to make up when you play in a mid-major conference.

Next on the schedule is Utah St. on the road. Losing there isn’t a “landmine,” as coach Dutcher likes to call them, because it would be a quad 1 loss on the road, but hopefully, the Aztecs can take at least one of them to add to their resume.

After that is the always tricky Air Force, also on the road. An Air Force team that split the series with Nevada. Only after the Air Force series does the schedule start to let up, and even then, if the games against Nevada were this close, how confident can fans be about any of the games? When losing to any team not named Boise St. or Utah St. potentially spells doom for your season, the stakes will be high every game. How the Aztecs handle that pressure will shape how successful the season is.

Here is the season projection from KenPom. It doesn’t include a possible series against UNLV because one hasn’t been announced yet. 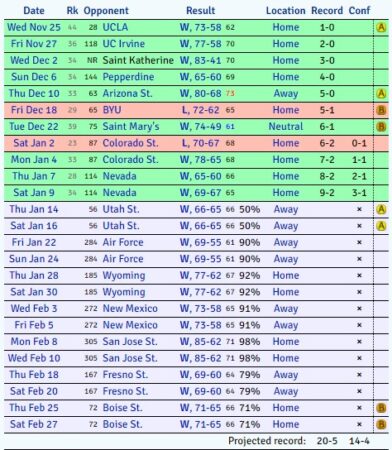