On May 15th of the 2018 season, Jordan Lyles nearly threw a perfect game for the San Diego Padres.

Now, as a member of the Pittsburgh Pirates, he dominated his former team for seven innings while striking out a career-high 13 batters.

The only blemish Lyles received came in the first inning to the second batter in the Padres lineup. Franmil Reyes, who homered in yesterday’s ballgame, went deep again tonight as he drove a first-pitch fastball to deep center field to give the Padres an early 1-0 lead.

The Padres starter, Joey Lucchesi, matched Lyles pitch-for-pitch throughout the game. Gifted the lead thanks to Reyes’ 14th home run of the season, Lucchesi cruised through the first three innings unscathed as pitching was the name of the game. He was consistent with his pitches all night long as he threw 68 percent of his pitches (77 pitches-52 strikes) for strikes.

The only runs to come against Joey Fuego proved to be the unfortunate downfall for the Padres. Immediately after Josh Bell’s single, Bryan Reynolds took Lucchesi deep to center field for a two-run home run to give the Pirates the lead. Lucchesi left a 90 MPH sinker over the middle of the plate and Reynolds didn’t miss it as the ball left the bat at 103.2 MPH according to Statcast.

Lucchesi buckled down after the home run to pitch three more innings. He departed from the game after seven innings, allowing just the two runs on five hits while striking out six batters. More impressively, he didn’t walk a single batter, a feat he hadn’t accomplished all season. Another tribute to his improved control was his strikeouts, as five of the six Pirates he struck out went down looking at strike three. 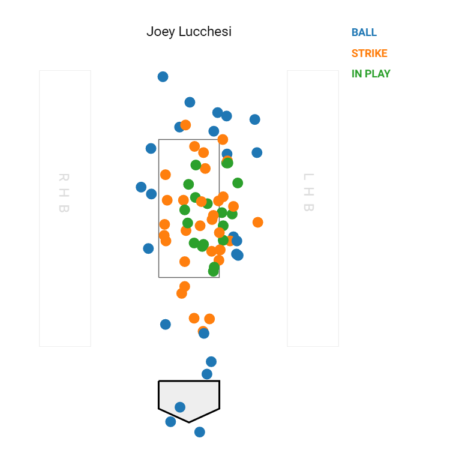 Unfortunately, his offense didn’t offer him any support. Whether it was by a single, error, or walk, the Padres got a runner on in every inning excluding the fifth, but Lyles extinguished the threat every time. The best chance for San Diego came in the sixth inning with Eric Hosmer at first base and Manny Machado on third, but a Wil Myers strikeout and a Ty France line out ended the threat.

What didn’t help the Padres were batters five through nine in the lineup. Counting Lucchesi and the two pinch hitters in the nine-hole, Austin Allen and Greg Garcia, the grouping of Myers,  France, Manuel Margot, Austin Hedges, Lucchesi, and the two pinch-hitters went a combined 3-for-20 with zero walks and accounted for 11 of the 15 total strikeouts the Padres had as a team. Hedges had three strikeouts while Myers and Margot both had two. The continued strikeouts are an ominous sign of things to come and is something that needs to be fixed or at least worked on if the Padres want to be a successful team.

The Pirates, on the other hand, piled up insurance runs in both the eighth and ninth innings against Brad Wieck, Phil Maton, and Gerardo Reyes. Walks from Wieck and Maton set up a two-out RBI double from Melky Cabrera, while a walk and three straight singles off of Reyes in the ninth brought in two more runs to make the score 5-1. Matt Wisler put a stop to the bleeding by getting the final two outs of the inning.

Myers led the bottom of the ninth inning with a line drive that skipped past Reynolds and was ruled a double. France, who finished the game 2-for-4 and was the only batter in those mentioned above five through nine hole to not strikeout, hammered a 2-1 fastball from Felipe Vazquez into the second deck in left field at 103.3 MPH off the bat to inch the Padres a little bit closer. Unfortunately, Margot, Hedges, and the pinch hitter Garcia went down without much of a fight and San Diego dropped the second game of a four-game series.

The Padres will try to cut down on the strikeouts tomorrow in support of Nick Margevicius at 5:40.

I am currently attending San Diego State University while working on achieving a major in journalism. At SDSU, I write for The Daily Aztec while also hosting the sports radio show "Picked Off", for KCR Radio. A loyal fan of San Diego sports, I hope to bring content that you will enjoy reading.
Tags: Joey Lucchesi, Padres 2019, Padres MLB, Padres vs Pirates, Pittsburgh Pirates, San Diego Padres