The 2018 season was a breakout campaign for San Diego Padres’ outfielder Franmil Reyes. He was at or near the top in most Statcast numbers, and that is impressive for a player who is only 23. Let’s take a further look at the Padres slugger.

Nobody really expected Franmil Reyes to make any kind of impact on the Padres’ major league team during the 2018 season.

Yet here we are looking back on his surprising performance in the big leagues, and it’s clear that he was one of the best hitters on the team last season.

Reyes simply displayed a knack for hitting the baseball with remarkable force in 2018, which makes his breakout seem like it isn’t a fluke. It’s not like he was getting lucky on his batted balls, as Statcast clearly indicates that he hit the ball harder than the vast majority of major leaguers last season.

If Franmil Reyes continues to hit the way he did last year, he’ll be a very legitimate middle of the order hitter. We aren’t assuming that he will continue to do so, but his batted ball profile from 2018 has presented us with a compelling case to consider.

Do you know how many hitters with at least 150 batted balls, hit the ball with an average exit velocity of 92 mph or higher?

Here’s the bulk of his batted ball data relevant to our investigation of his 2018 performance:

The data above tells us all we need to know, regarding Reyes’ ability to pummel the baseball in the batter’s box. He’s among baseball’s best in doing so, which is encouraging for his future chances of repeating the success he had throughout the 2018 campaign. However, we also need to evaluate where his batted balls went, to further evaluate hitting capabilities. Let’s take a look at a chart illustrating the batted ball locations of all Reyes’ base hits in 2018: 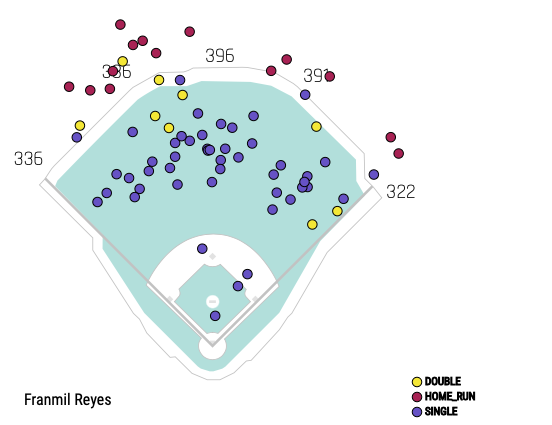 He did a good job of spraying his hits to all fields, including his extra-base hits and home runs. As the chart also shows us, nearly all of Reyes’ hits were fairly deep in the outfield, which provides further evidence of his power. His home runs were hit at an average distance of 404 feet, which ranked best among players on the Padres. Reyes’  base hits went an average of 218 feet, which is pretty deep.

He did this while having an average launch angle of 6.8 degrees on batted balls, which ranked 39th-lowest among qualified hitters. In order for him to be so successful as a hitter on batted balls hit at a much lower launch angle than average, he had to be hitting the ball with great exit velocity. As the data earlier indicates, he definitely did just that. Additionally, he was also the author of the major leagues’ fifth-furthest home run hit by players with at least 150 batted balls.

Take a look at this home run that Reyes hit 477 feet:

Taking a look at how Reyes hit that pitch, it’s clear he was just reaching out to try and make contact with it. He’s off balance as he makes contact with the pitch. Yet his power is so prodigious, that he ended up hitting the longest home run at Wrigley Field in 2018 anyways.

Now that’s all great and fun to talk about with regard to Reyes’ Statcast profile, but he certainly has some flaws, too.

For one, Reyes struck out in 28.1% of his plate appearances in 2018. He doesn’t play very good defense and certainly was not very impressive in right field. He’ll probably never be a very good defender, and this will always hold him back from being a true all-around player. Were it not for his subpar defense in 2018, Reyes could have been worth significantly more to the Padres. If he improves his defense going into next year, he could be a building block for the team moving forward.

Largely though, Reyes has such a strong batted ball profile that his weaknesses are excusable. On average, his base hits were struck at 98.7 mph. Across the league as a whole, balls hit at 98 mph went for hits 43.4% of the time, which bodes well for Reyes’ ability to repeat past success on batted balls. The Statcast data on his hitting is highly impressive and offers us information about just how unique Reyes’ production was, during the 2018 season. When we see a player hit the ball nearly as hard as Giancarlo Stanton and Aaron Judge, we should certainly take note of him. The new data Statcast has begun to offer, allows us to be markedly more confident in Reyes’ ability to continue mashing major league pitching in 2019. Considering the lack of impact bats in the Padres’ lineup, the team should hold onto him as opposed to trading him. After all, Reyes was probably the best hitter on the team during the 87 games in which he played.

We enjoyed your article! Keep up the good work.

Hi Conrad, We enjoyed your article! Keep up the good work.

Thank you, Peggy! Much appreciated.

If the bb% can be maintained and the k% be stable at or become less than 20%,
Franmil is going to be force to be reckoned with. May have a little regression as the league catches up with him, but these adjustments show he’s capable of further growth.

I can appreciate your perspective. For me, I would like to know if the DH will be in both leagues in the next few years. For Reyes, it matters to me. I also don’t know his defensive ceiling. Is he at it? Is he less than halfway there? Unlike some, I am okay with San Diego having not been the standard-bearer this off-season so far on total moves. Preller and Co. are in an enviable but difficult position. I don’t see him as an everyday player in the NL currently on a championship caliber team, but he’s a buy low… Read more »

So Kluber is 1 yr and 2 option years at 17M, 18M and 18.5M. Tack on 4M to 2019 with an escalator already achieved. On the options they both have escalators too that could be as much as 4M each year. 65.5M Grandal just turned down the Mets for 4yr 60M so assuming he could be had it will be at least that plus the lose of a pick. Kyle Seager v Wil Myers makes zero sense. Wil is 4 yrs younger and their isn’t one number Kyle has over Wil. Kyle wasn’t even league average offensively and is trending… Read more »

thanks for the great article Conrad. The statistics support what I saw at Petco last season.
This is a Padre we need to keep

Thank you! I’m glad you enjoyed it.