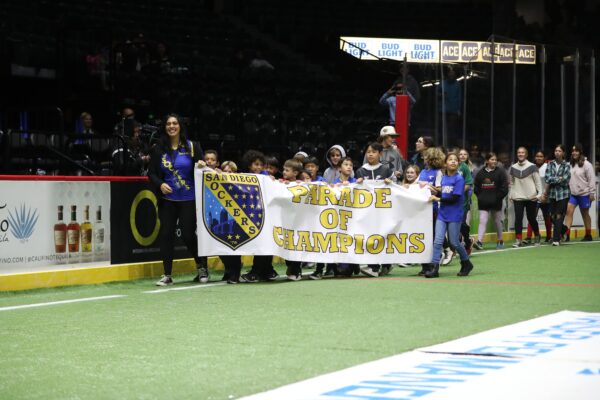 Rings were distributed, a banner raised, and two wins capped off an opening weekend to remember for the San Diego Sockers.

Back-to-back games against the Empire Strykers (0-2-1, 1 pt) to start the season tested the early season conditioning of the Sockers (2-0-0, 5 pts) with the Sunday edition of the I-15 Derby going to overtime.

Tavoy Morgan started his campaign right where he left off last season on Saturday night. He scored three times and added an assist in his opening-game performance.

Guerrero Pino and the defensive unit had a fantastic weekend. The group held the Strykers best playmakers in check, allowing six goals in both games combined and holding the MASL’s record goal scorer Franck Tayou to a singular goal late in the 4th quarter of Saturday’s game.

In the first meeting between the two teams, a Sockers 8-5 victory, the score was close for the first three quarters as the Strykers refused to let the Sockers get ahead by more than two goals at any given time. Both teams showed some early season rust, the Sockers had only begun training camp two weeks before their first match, and the contest was physical from the start.

In the fourth quarter, the Sockers were dialed in, and the offense started clicking immediately. Escoto and Cerda both scored within 3 minutes of each other and capped off a run of three straight Sockers goals to push their lead up to 7-3. This, coupled with excellent defensive play and goalkeeping from reigning Goalkeeper of the Year Boris Pardo, forced the Strykers to pull Claysson de Lima for a 6th attacker. Tayou and Jesus Pacheco would both score, but it would not be enough on the night. 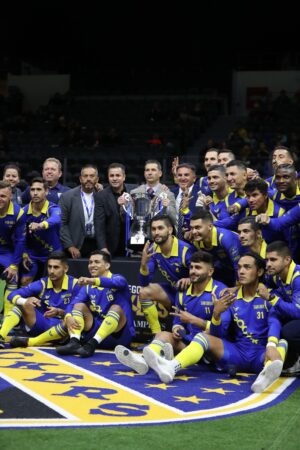 Sunday night at Pechanga Arena, the rings for last season’s championship run and banner were displayed in a pre-game ceremony, the last ceremony the arena will see in Sockers history. Once the pomp and circumstance was over, the Sockers came out firing, with Brandon Escoto opening the scoring less than four minutes into the game.

Instead of letting the script repeat itself, Chris Toth recovered well and was heroic throughout the rest of the night for the Strykers. Toth would end the night with 27 saves and was one of the big reasons the Sockers struggled offensively on the night.

Empire would keep the game within striking distance, killing off two Justin Stinson blue card penalties in the first. Stinson would make up for his transgressions with a strike of his own early in the second quarter off an assist from Nestor Hernandez.

Going into halftime, there were plenty of shots, large lengths of fluid play, and minimal fouls called, but neither team was able to beat Toth or Pardo.

The second half was largely controlled by the Sockers, but great defensive plays by the Strykers led to turnovers and unforced errors that stopped the offensive flow for San Diego. It would not be until late into the fourth quarter, when Pino took down Uzi Tayou as the last man leading to a man advantage, that we would see Empire’s best chance come to Franck Tayou. Pardo and crew were up to the task, and regulation would end tied at one goal apiece.

In the overtime period, the Strykers would be on the front foot for most of it, starting with the first 1:18 being on the power play. Pardo would make his best save of the night at point-blank range off a Gabriel Costa shot. Cesar Cerda would once again come to break Stryker’s hearts when he dispossessed Juan Topete at midfield, ran down the wing, and beat Toth with a far post shot for the golden goal-winner to end the game 2-1.

With the win, the Sockers pushed their streak of games undefeated in regulation to 43 in a row, and head coach Phil Salvagio recorded his 200th career win as coach. Next weekend, the Mesquite Outlaws (2-0-0, 6 pts) will visit Pechanga Arena on Sunday, December 18. The Outlaws are returning to the MASL after going on hiatus since the 2019/20 season due to covid related difficulties and currently sit at the top of the Western Conference standings early in the season.

Born and raised in Point Loma, to a passionate soccer loving, Portuguese family and was raised with an even bigger love of the sport. Being from San Diego, he has a deep love for all of our hometown sports, but soccer is truly where his heart lies. He played the game from an early age through High School and even tried his hand at coaching the Point Loma High School Girls Soccer team. He has been a Loud and Loyal supporter of many clubs over the years, making his voice heard in many a chants behind the goal for the Sockers, the Loyal, and the Men’s and Women’s National Teams when they have played in our great city. He even met his wife of two years, through their joint love of soccer. You could say that every part of his life has always involved soccer.
Tags: San Diego Sockers, SD Sockers, Sockers

Can the Sockers secure their third-straight championship?