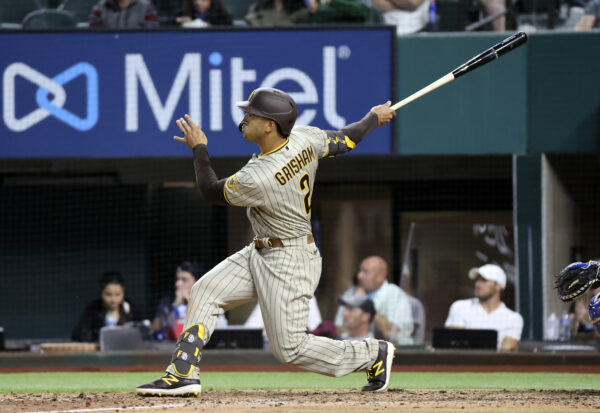 The last two seasons have not been favorable for Trent Grisham, but should the San Diego Padres remain patient with their center fielder?

In the Covid season of 2020, Trent Grisham produced a .808 OPS and won a Gold Glove in his first year with the San Diego Padres.

The left-handed hitter looked to be a star for years to come, and Padres fans were celebrating the trade with the Milwaukee Brewers. Grisham slugged 10 homers and stole 10 bases in just under a full season and seemed to be the leadoff man of the future for the Padres. All was well.

The warm feelings ended in 2021, as Grisham had a horrendous second half of the season, recording a .630 OPS in 228 at-bats. This after beginning the 2021 campaign on fire, putting up a .849 OPS and slugging 11 homers in 234 at-bats. A .183 batting average in July sent Grisham to the tail end of the batting lineup, and he has toiled there ever since.

Since the second half of the 2021 season, Grisham has put up a slash line of .197/.290/.338 in 679 at-bats. His OPS sits at .628 during that span, which is well below average. The left-handed hitter did slug 21 homers in that time, turning into Joey Gallo for some odd reason. That brings us to another problem with Grisham over the last year and a half. He is striking out way too much (208 in total over the last year and a half).

Grisham won his second Gold Glove in 2021, showing that his offensive issues were not taken with him to the field. His elite defense is what arguably has kept him on the major league roster through his offensive woes. Grisham has minor-league options left, but the Padres have elected to leave him alone and let him figure it out. He played in 152 games last season, including every inning in the postseason for the Padres.

Trent Grisham is solidified in centerfield mostly because the Padres have had no other options or threats to his playing time. Jose Azocar filled in for Grisham last season, but the speedy outfielder is not going to steal the starting job from Grisham. Or at least he hasn’t shown the skills required to do so just yet.

As the winter season began, it was presumed that Tatis would lose some playing time to Ha-Seong Kim at shortstop in 2023. Now with Xander Bogaerts on the roster, Tatis went from losing playing time to losing the position altogether. Early indications are that Bogaerts will remain at shortstop, and Tatis will move into the outfield. Most assumed he would play a corner position, but there are rumors building that the Padres may elect to play Tatis in center field.

So where does that leave Grisham, who is only 26 years old?

Playing center field is not easy. There is no doubt Tatis is a physical specimen and as athletic as they come, but it is natural to have some hesitation in thinking he will be a plus defender. Grisham may have offensive problems, but his defense does not take a day off. The question comes down to trust in Grisham to improve with the bat and whether or not you value defense over what Tatis will bring you on offense.

So, should the Padres remain patient with Grisham?

The answer is yes. With three years of control on his contract, the Padres will likely keep Grisham on the roster. The upside is there, and most of his struggles with the bat seem mechanical. The left-handed hitter showed a better approach late in the season and into the playoffs but failed to stay consistent. Grisham also has issues with his mental approach, as he often took pitches down the middle last season only to chase the next pitch in the dirt (or vice versa).  Things like this can be amended with hard work and discipline.

The Padres should continue to show faith in Grisham heading into the 2023 season. I will warn you, though. A.J. Preller is active on the trade front, and Grisham’s name has surfaced in a few rumors. Anything can happen in this era of San Diego Padres baseball.

James was born and raised in America's Finest City. He is a passionate baseball fan with even more passion towards his hometown Padres. Editor-In-Chief of EastVillageTimes.com. Always striving to bring you the highest quality in San Diego Sports News. Original content, with original ideas, that's our motto. Enjoy.
Tags: Padres 2023, San Diego Padres, Trent Grisham