On Thursday, the sports world pauses for a few days as the NFL holds its annual draft. The jobs of general managers and scouts are on the line as their choices directly impact the product their teams put on the field. Teams’ selections are based on a tension between roster needs and the best player available. Great drafts lead to lucrative contracts and consolidation of personnel decisions around the architects of the picks. If decision-makers choose too many unproductive players, they risk moving to an advisor role in future years.

If executives inside NFL War Rooms want to be in the former group, they would be wise to select San Diego State’s Daniel Bellinger. He is the best tight end in the 2022 NFL draft.

Making that claim is admittedly outside the scope of expertise for a local media member. Having covered Bellinger the past two seasons, it is easy to confidently say he is a quality person, leader, and world-class athlete. The challenge is knowing how his ability stacks up against the rest of the tight ends in the class. Typically this is an insurmountable problem and makes weighing in on a prospect’s standing amongst his peers futile.

Among the tight ends, this year is an exception to that rule for a couple of reasons. There is not a clear-cut star in the group. None is expected to go inside of the first 50 selections. While there is a lot of variance among the top 10 position rankings at the position, there is a general consensus that Colorado State’s Trey McBride and UCLA’s Greg Dulcich are the top two players at the position.

NFL Network’s Daniel Jeremiah is one of the leaders in his industry. His skills are coveted by NFL teams. His ties to America’s Finest City also give him expertise on the best football team in town. If Jeremiah ranks Bellinger third, it is not going out on a limb to suggest the Aztec for Life should be even higher given the parity at the position.

Like Jeremiah, Sports Illustrated, Pro Football Focus, and the NYPost rank Dulcich and McBride at the top of their rankings. The majority of reputable draft gurus, likewise, have one or both near the top of their position projections. Where they differ is their view of Bellinger. Jeremiah gives SDSU’s team captain more respect.

“Not too much,” Bellinger explained on an upcoming episode of The SDSU Football Podcast when asked if he paid attention to all the draft chatter. “I see it. You see the mock drafts all over. They told us at the Senior Bowl and the Combine, ‘Don’t pay attention to it because, at the end of the day, one pick will change everyone’s (draft) board.’”

“So, it’s really hard to see where I’ll land or what round I’m going to go or what’s going to happen. It really depends on the day. If the tight ends go earlier, I’ll go earlier. If the tight ends go later, I’ll go later. It’s exciting, and it’s kind of fun to watch – and it’s definitely a dream come true, for sure – but I’m really excited for what’s after. I don’t really pay attention to it too much.”

At the beginning of the draft process, one of Bellinger’s chief tasks was proving he was underutilized in the passing game at SDSU. The work he has done at the Senior Bowl, Combine, SDSU Pro Day, and private workouts have dispelled any idea that he is only a blocking tight end. The question NFL evaluators have in front of them is how much they should value McBride and Dulcich’s college production over Bellinger’s clear athletic superiority. 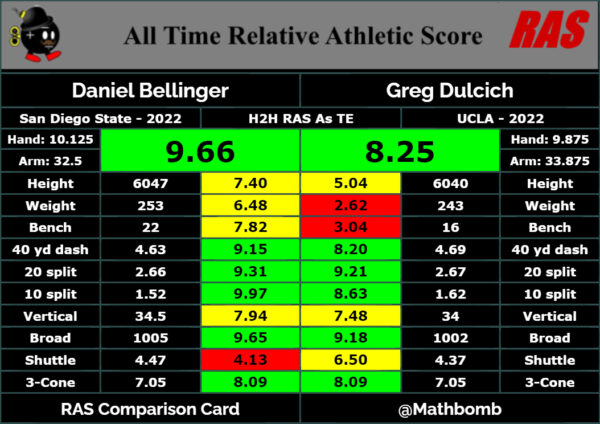 Relative Athletic Score (RAS) is a metric invented by Ken Lee Platte. As a tool, it is most helpful in understanding where a player ranks among the athletes who have taken part in the draft process over the years. Since the potential draftees have competed in the same drills year after year, RAS makes it possible to compare performances.

Among the 1,010 tight ends in the RAS database, Bellinger’s performance at the NFL Combine ranked 36th all-time. His 9.66 overall score is only .34, away from a perfect RAS of 10. It is also considerably higher than Dulcich and McBride. Dulcich’s 8.25 ranks 143 spots below Bellinger in the all-time rankings, while McBride’s 8.03 is 162 places lower. Dulcich and McBride are primarily pass-catching tight ends, and their lack of athleticism is one of the reasons why. 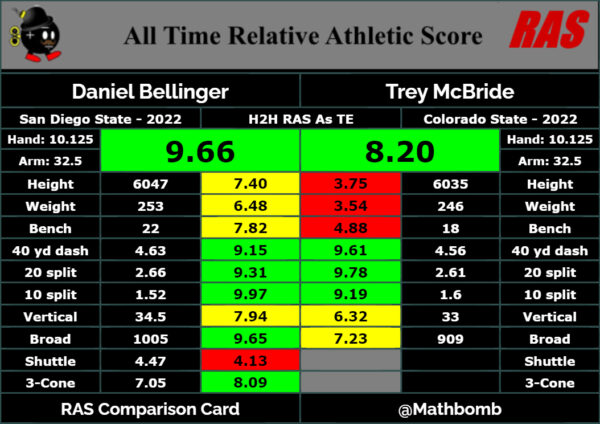 They profile as H-backs because they lack the athleticism to block quicker defensive ends and linebackers in space. Bellinger, in contrast, has a greater ability to block on the outside. The Aztecs’ tight end is also bigger and stronger than his counterparts. That Bellinger is a better blocker is no revelation, but what his numbers prove is he gets the job done on more than just superior effort and toughness.

They were used like elite TEs in the professional ranks. If it was certain that style would translate to the NFL, the pair would be projected to go in the first two rounds. If they cannot be utilized this way, their value drops significantly. McBride and Dulcich are terrific players, but their selection carries more risk and less reward than selecting Bellinger.

McBride’s overall 40 time is better than Bellinger’s, but a closer look reveals the former Aztec is far more explosive. His ten-yard split is exceptional. He is a better athlete, and it shows. Football is played close to the line of scrimmage. Firing off the line quickly creates mismatches not hitting stride down the field.

“It was great,” Bellinger replied when asked about the NFL Combine. “It was a lot of fun. It was easy because all the tight ends are super cool. It was cool making friends with them, talking with them. Of course, at the Combine seeing Greg (Bell), Zach (Thomas), (Will) Dunkle, and those guys, getting a chance to talk to them, see how their process went. … I was just excited to get out there and show these guys that I could run a little bit. It was fun, and I had a great time with it.” 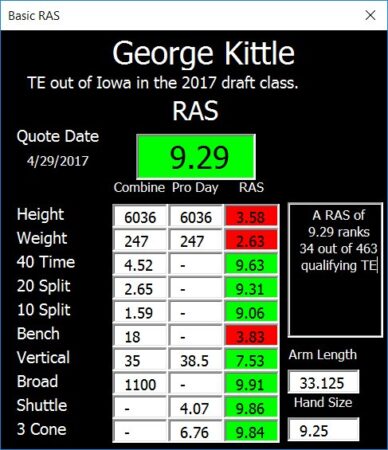 Among current NFL players, Bellinger’s athletic profile most resembles San Francisco 49er, George Kittle. Like Bellinger, Kittle’s reputation coming out of college was as a blocker. In the NFL, Kittle has grown into an elite pass-catcher. Kittle and Bellinger are represented by the same agent and have worked out this offseason.

Bellinger has met every challenge set before him in the draft process. By being named the best tight end on the American Team at the Senior Bowl over Dulcich by the linebackers and safeties on their squad, Bellinger proved he has a future as a TE1 in the NFL. When he created buzz at the Scouting Combine with his performance there, he showed he won with talent in addition to his great effort. Anyone at SDSU’s Pro Day watching Bellinger gracefully pull in passes deep downfield knows he is a threat to stretch the field.

With this phase of the process done, all that is left to do is wait. The Las Vegas native will find out his NFL fate in his hometown. A friend gave him a great rate on a suite in one of the local hotels. This is the final step that will allow him the opportunity to do what he does best, play football.

“Yeah, that’s probably the part I’m most excited about,” Bellinger said when asked about getting to play football again. “It’s tough doing these track workouts and getting ready for a 40 and jumps and all that. It really just comes down to how you play ball, so that’s what I’m excited about. A lot of guys are really high up on the stats and the production of these other tight ends. I think (recognition) will come as long as you just play ball. I’m excited to play some ball.”

Over the next couple of years, one of two narratives will form. Either a team will draft Bellinger in the middle rounds, where most mock drafts predict, and fans across the league will bemoan that their teams passed on him multiple times. Or a forward-thinking GM will step up earlier to secure Bellinger’s talent for his franchise. In either case, Bellinger will make who selects him look like a genius because Daniel Bellinger is the best tight end in the NFL draft.

My earliest sport's memory involve tailgating at the Murph, running down the circular exit ramps, and seeing the Padres, Chargers and Aztecs play. As a second generation Aztec, I am passionate about all things SDSU. Other interests include raising my four children, being a great husband and teaching high school.
Tags: Daniel Bellinger, Greg Dulcich, NFL Draft, The SDSU Football Podcast, Trey McBride