Since 2000, U.S. National Athletic Training is celebrated annually in March. It is then, with a touch of irony for a profession rarely in the spotlight, that an article detailing the Athletic Medicine Department at SDSU would be published in April. The motto chosen by the National Athletic Trainers Association for 2022 was “Providing Health Care Everywhere.” The Aztecs’ athletic trainers embody this ethos and are a testament to their profession.

They are present at every practice, run, lift, or anywhere else the student-athletes need them. The trainers are the first people on campus in the morning and the last ones to leave. On-call basically 24/7, their job has no offseason. If they had it their way, they would rarely form good relationships with the athletes they serve because the only players who know them well are those with frequent injuries. With the focus on the upcoming game, their work is not always appreciated until it is gone.

This past December, EVT caught up with SDSU great Matt Mitchell. Mitchell was asked what he missed most about being part of the Aztec program. The expected response was clichés about his teammates, the coaching staff, the campus, or the atmosphere at Viejas Arena.

“I would say the training aspect of it. I think the coaches at the collegiate level in America and the training staff for physical and weight are so much more hands-on and versed. When you get overseas, there is a difference. … For me, it’s not having Sergio Ibarra, our physical therapy, our everything. He taped our ankles, working out any of the kinks. Not a knock at all to the staff that we have, Chris and Sammy in therapy do an outstanding job. At the same time, Sergio and Justin Landry, being older, gives them an advantage being at a college level to hone in on different guys and what they need to excel over a season.”

Mitchell came to SDSU as a freshman, and Ibarra had four years to learn the specifics of the Aztec forward’s body, temperament, and athletic process. As Mitchell grew as a person and player, Ibarra grew with him, forming a bond of trust and gaining expertise on the player he cared for. No matter how skilled Mitchell’s new training staff is with Sig Strasbourg, it takes time to excel as an athletic trainer because the job performance is very individualized and personal.

“People think that the pros have the best trainers,” Spieldenner explained. “But, what if it was the other way around and colleges are actually better. … The professional teams are more of a business.” 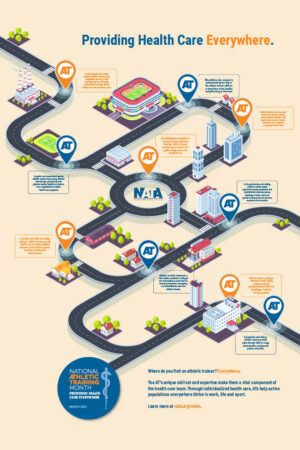 It was Spieldenner’s brainchild that led to so many former athletes wishing they could bring their trainers with them into the professional ranks. With the support of SDSU’s administration, his department added a significant number of trainers. Even during Covid, when many schools were reducing their numbers, SDSU added to Spieldenner’s staff. The result is that except for teams with a smaller number of athletes, each trainer focuses on only one sport.

According to Mitchell, part of the challenge with SIG is the trainers there mostly have experience with soccer and are not as versed in the specific needs of basketball players. While Spieldenner’s vision has allowed SDSU’s trainers the opportunity to gain expertise in the sports they work in, that was not the primary aim of his change. Allowing each trainer to focus on a known number of students, helped to facilitate relationships and the trust that comes with it.

“Honestly, for everyone to get the most out of it, (relationship is) crucial,” Josh Nutch, Assistant Athletic Trainer for football, told EVT. “I don’t ever want the athletes to feel that I’m just spinning my wheels, going through the motions … Some of the days may be really uncomfortable. Some of the days may seem like they can’t push through something, but I’m never going to ask them to do something that doesn’t have their best interest in mind. Finding a way to convey that and communicate that, sometimes you have to meet at a middle ground. Give a little bit, take a little bit.”

Spieldenner’s structure also improved trainer retention at SDSU. Collegiate athletic trainers work long hours. Team workouts often begin at 6 am to allow students to attend class at normal hours. This means their trainers have to start work around 5 am to get their players ready. They typically end their day around dinner time. While the unconventional schedule permits some time in the afternoon to leave campus, it is not uncommon for the job to demand 12 plus hours per day. Adding a second team to that schedule is something only a select few can do effectively, and they usually cannot do it for very long.

More than anyone, Spieldnner understands the work-life balance that can be hard to find for athletic trainers. He is still the head trainer in addition to his role as a Senior Associate AD. Most days will find him working early in the morning, getting the players ready for the day and leaving in the evening. Between all of his work as a trainer, he hunts for time to complete all of his administrative duties, which are extensive for a director of a growing department that already numbers more than 15 people and impacts every athlete on campus.

Spieldenner creatively “finds the time” in-between working on his craft to fulfill his administrative roles. When the Aztecs travel, for example, that gives him a window to work on various projects. With SDSU Football no longer playing home games in Carson, he will have fewer hours on the road to work with and will need to hunt for opportunities elsewhere.

Among a trainer’s main duties is rehabbing an injured player. When an athlete is hurt, the trainers will do an initial evaluation to see if they need a referral to one of the team physicians. SDSU Director of Athletic Medicine is Dr. Allen Richburg. He has a practice with San Diego Sports Medicine.

Working under the guidelines set by the doctors, the trainers will make a plan to bring a player back to full strength. They work with the conditioning coaches in the program to modify the training regimen for the injured player. During the typical team workouts, the trainers lead the injured athlete in separate activities to get them back in the game.

“(The trainers) always being there, it helps your mental state…because they are supporting me,” former SDSU WR Elijah Kothe told EVT this week. “ At the end of the day, me and them had the very same goals. We wanted me to be healthy number one, but also to be able to compete and play again. …  It was nice that people had my best interest in mind, and were interested in my well-being, and wanted me to be healthy and safe. It helped on the mental side of things to put me at peace.”

Over the past few years, Spieldenner’s impact has been far beyond the athletic department.  He was a member of the subcommittee that decided how SDSU’s athletes would function on campus when the rest of the school’s population was off-campus due to Covid.  Working with the City and County of San Diego, the state of California, the NCAA, Mountain West, and other agencies, Spieldenner was one of the architects of the school’s response to the pandemic. He called the two years “an experience” and something he hopes he never has to do again.

Though the time was trying, like most things Spieldenner works with, it was fruitful. Due to Covid, the Mountain West Health & Safety Advisory Group was formed. It is comprised of 12 members representing all 12 football teams in the conference. Spieldenner is SDSU’s representative. The group continues to function and support the governing board in promoting the health and safety of the players.

National Athletic Training Month, celebrated each March, started in 2000 to bring well-deserved attention to the behind-the-scenes care trainers provide athletes across the nation. As much as anyone else in the country, the Athletic Medicine trainers under the guidance of Patrick Spieldenner, Senior Associate AD of Athletic Medicine/Head Athletic Trainer, embody the industry’s motto for 2022. SDSU’s athletic trainers are “Providing Health Care Everywhere.”

My earliest sport's memory involve tailgating at the Murph, running down the circular exit ramps, and seeing the Padres, Chargers and Aztecs play. As a second generation Aztec, I am passionate about all things SDSU. Other interests include raising my four children, being a great husband and teaching high school.
Tags: Elijah Kothe, Josh Nutsch, Patrick Spieldenner, SDSU, SDSU Aztecs, SDSU Baseball, SDSU Basketball