LAS VEGAS – The way this Mountain West season has gone, the championship had to go down to the final shot. Before the Mountain West tournament, Nathan Mensah and Matt Bradley were asked the question, “hypothetically, with game on the line, would you rather be on offense or defense?”

They both chose to trust their defense.

Unfortunately, down one today, they did not have that option. Bradley found himself in the lane and took a contested shot through a lot of contact. After a scrum for the ball, Pulliam had a floater to win the game. The shot was off.  Boise State won the Mountain West championship 53-52.

The Broncos held a three-point lead at the intermission. Lamont Butler made an acrobatic and-one layup to tie the game to open the second half.  From that point on, both teams traded the lead, answering each other’s runs with their own. The largest lead in the game was five.

With eight minutes to play and the game was tied. SDSU was on a three-minute scoring drought, and the Broncos did not make a field goal for over three minutes. Whoever made the winning plays late in the game would be crowned Mountain West champions.

With forty seconds to play, the Broncos had the ball and a one-point lead. Marcus Shaver drove into the lane, and Lamont Butler stepped in front to take a charge.

“We had two good of looks as you’re going to get,” Coach Brian Dutcher said. “Matt Bradley down the middle for a layup, Trey Pulliam to his runner to win the game, we had two looks to win the game, and unfortunately we didn’t make either one of them.”

“I should’ve made it,” Bradley said.

It’s not a race to win the Mountain West championship. It is a marathon.

Teams battle all season long, then are forced to win three games in three days to hang a banner.

To say the players were fatigued would be an understatement, especially when two of the most physical teams in the conference were playing each other. There was a combined 23 fouls in the first half with 24 free throw attempts.

Marcus Shaver picked up two first-half fouls, and Mladen Armus had three. Lukas Milner took Armus’s place. Coming into today, he played a combined nine minutes in the Mountain West tournament. Emmanuel Akot suffered a first-half injury, Pavle Kuzmanovic checked in, who has played one minute in the tournament. It was a next-man-up mentality as both teams searched for fresh legs.

Nathan Mensah took advantage of Armus being off the floor. He grabbed seven offensive rebounds in the first half.

The Aztecs had their own foul-trouble issues to contend with. Every guard had multiple fouls called on them in the first half. Adam Seiko had three fouls. Lamont Butler, Chad-Baker Mazara, Matt Bradley, and Aguek Arop all had two fouls.

In every matchup between the teams, the free-throw line has been the difference-maker.

In the first Aztec loss, it was the ugliest offensive performance of the season, where they lost 42-37. The Aztecs made two more made field goals, but BSU made eight more free throws. The second matchup was more of the same. It went down to the final seconds. SDSU made five more field goals but ten fewer free throws. They lost by one.

Tonight, the Broncos went 12-for-21 from the line opposed to the Aztecs going 6-for-12. Again, the Aztecs made more field goals and lost the game.

In the second half, the refs swallowed their whistle more, particularly in favor of the Broncos. There were two questionable non-calls on Aztec layup attempts, then Armus got the same call the following possession on a made layup. Dutcher was fuming and had to be restrained by assistant coach Dave Velasquez.

Three minutes later, Trey Pulliam made a layup but was called for a charge. Dutcher fell to the floor in disbelief.

“Obviously, we put them on the line too much, and that cost us,” Dutcher said.

Defensively, the two best teams in the conference flexed their strength. No possession was easy. The Aztecs shot 35% from the field. The Broncos shot 38%.

But in the second half, Armus returned and did not get himself into worse foul trouble. The Aztecs only grabbed one more offensive board. The Aztecs lost the rebound battle by three. Max Rice, Leon Rice’s son, is one of the shortest players on the Broncos, but he led the team with nine rebounds.

After two straight single-digit performances, Matt Bradley showed leadership as he took more of the offensive workload. He opened the second half with a quick five points, including a contested three. He finished with 17 points and seven rebounds.

With everyone in foul trouble, it is surprising that Nathan Mensah stayed out of it. Defensively he played one of his best games of the season. He also crashed the glass as if this was his most important game of the season. He finished with ten rebounds and four blocks.

Lamont Butler was fantastic. He made his first four shots which included two threes. He was a menace defensively, and he matched his season-high of 16 points. 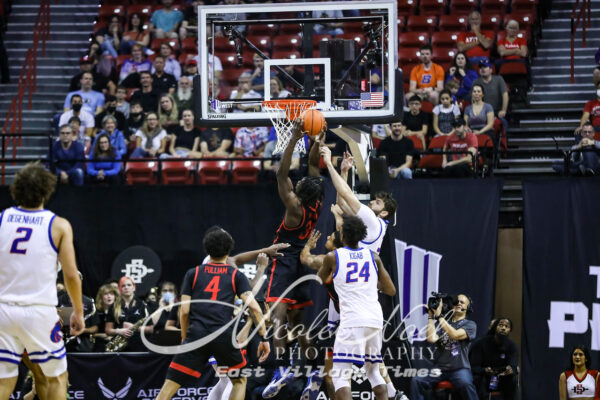 Aguek Arop again was a spark off the bench. He forced a ten-second violation after swatting a pass at halfcourt. He followed it up with a put-back slam off a Joshua Tomaic missed shot. Late in the second half, Arop checked himself out due to an injury. But he came back when the game mattered the most. He dove out of bounds to save a possession. At the end of the game, he was in tears after leaving it all on the line.

“We don’t want to feel like this ever again,” Arop said.

The Aztecs will now have to hit the reset button. They leave the Mountain West tournament having to get rid of this sour taste in their mouth.

Tomorrow is selection Sunday. The Aztecs will find out where their seeding for the big dance is in the following week. After this weekend’s performance, they will most likely be anywhere from an eight to a six seed.

“We’re here to play for a national championship,” Dutcher said. “We’re here to go to the final four. So winning the Mountain West is just a step towards that goal.”

Class of 2022 at San Diego State University. Communication major and pursuing a sports journalism profession. Season ticket holder of the SDSU MBB team since 2011. Fondest memory of Viejas Arena is Aztec legend, Dwayne Polee sparking a 19-1 run over New Mexico to win the MW Conference in 2014.