SDSU’s Spring Game was an unquestioned success. After a few years absence, the embrace from the Aztec football community was evident. Spectators could barely move along the walking path.  Numerous fans, unable to find a seat, sat on the ground to take in the action. Former players poured into the Aztec Legacy Area on the far end of the practice field opposite the entry gates.

“I think that the Athletic Department did a good job reaching out to former Aztecs by offering the VIP area,” former Aztec tight end Parker Houston told EVT. “I think all alums went in hopes of seeing someone they used to play with and wanted to reconnect. Personally, I loved the VIP area. I haven’t seen a lot of the guys since we all stopped playing and it was really good to connect with them again and see how everyone is doing. …Everyone was in good spirits and was excited to be back on campus watching Aztec football! A lot of us talked about how pumped we were to go see a game in the new stadium.” 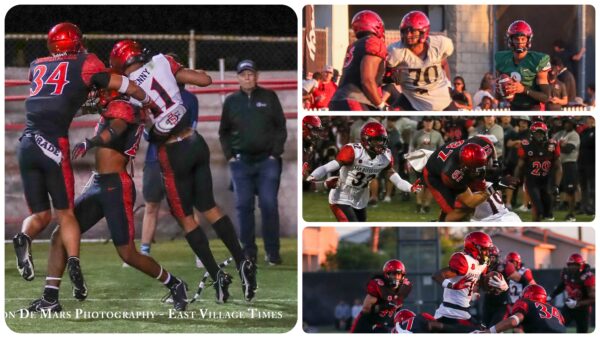 SDSU had its first field storming of 2022. At the conclusion of the evening, fans emptied the stands. They made their way onto the playing surface to greet the players following the game. The scene was similar to the postgame of a bowl game with families and friends hugging, congratulating, and snapping photos with their favorite Aztecs.

There was a large number of area players of all ages in attendance. Matt Razzano and his recruiting staff deserve a lot of credit for their outreach. SDSU Marketing Department put on a fun event. Upon entering the gate, every fan was greeted by cheerleaders. There was a long line of people wanting to get Rashad Penny, Donnel Pumphrey, and Brian Sipe’s autographs. The tight confines gave an electric, standing-room-only feel to the evening.

One player in attendance yesterday was 2023 QB, Jax Leatherwood, from Scripps Ranch High. He is one of the top recruits in San Diego regardless of class and holds an offer from SDSU. Leatherwood, accompanied by his parents, reconnected with former Scripps Ranch teammates and current Aztecs, Nick Gardinera and Mekhi Shaw following the game.

“It was awesome to see my guys, Nick and Mekhi,” Leatherwood told EVT. “Nick and I talked a little about the program and how great it is. Nick got me really excited about a possible future at SDSU!”

Whatever the impact Snapdragon Stadium has on recruiting, there will still be a sizeable gap between the Aztecs and the upper echelon of college football. For one night, SDSU highlighted something only they can give to area players, the opportunity to play in front of family and friends. More than a mere talking point, the Spring Game demonstrated what that advantage looks and feels like, allowing local prep athletes to envision themselves as the recipients of the postgame celebration in future years.

“Everyone was smiling and laughing after the game, so I felt a great vibe from players and fans,” Leatherwood said. “I was able to talk to a few other recruits and they all seemed super excited about the program so my interest in SDSU has only increased since yesterday!”

SDSU’s Quarterbacks vastly improved from a year ago 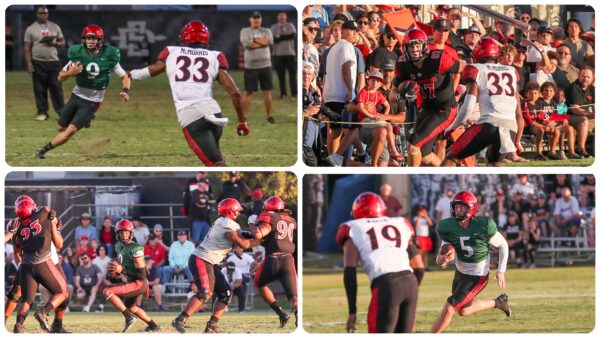 Last year Team Aztec defeated Team Warrior 10-3 in the Spring Game. There were 403 yards in total offense. The signal-callers in a preview of things to come in 2021 finished a combined 18-45 (40%) for 271 yards and one score. As the 15 yards per completion indicates, most of the damage done came through a couple of big plays.

This year’s Spring Game rendition only had 52 more yards of total offense (457 total), but the two contests could not be more different. The QBs yesterday were light years ahead, completing 35-58 (60%) for 304 yards and four touchdown passes. More than just the numbers, Thursday’s competition actually resembled a football game.

“Well, I think Will (Haskell) and Braxton (Burmeister) both came out and did what we thought they would do,” Brady Hoke said postgame. “You know, I think they both have progressed through the spring. I really think Will came out and performed well, and I was happy to see that because he’s been a little up and down so I thought he was more consistent. Braxton has been pretty good all spring, he’ll be our starter in the fall and we will see what happens.”

Last season’s Spring Game with only a handful of spectators lacked energy and any offensive rhythm.  The QBs rarely completed passes from the pocket. While this year’s group also had a few instances of signal-callers showing off their improvisational skills, much of the damage done was in the rhythm of the offense.

Haskell and true freshman Liu Aumavae from Team Pumphrey found much more success than their counterparts Burmeister and Kyle Crum on Team Sipe. Team Pumphrey threw for 200 yards compared to Team Sipe’s 104. Aside from better QB play, one of the main reasons for this discrepancy in yardage is only two of the signal callers had to play against Patrick McMorris.

“I think he’s as good of a player as you can have back there. Pat’s got good instincts. He’s got really good speed. He’s long.” Hoke said about McMorris following the game.

The 3-3-5 needs an elite Aztec safety to work, and both players on the two-deep in 2021 at the position, McMorris and Kyron White, played for Team Pumphrey. Haskell and Aumavae excelled throwing in the middle of the defense against newly converted safety Jalen Mayden, who patrolled the Aztec for Team Sipe.

Probably as important was the worst QB yesterday was the player who will likely be the starter against Arizona. Not only does last night’s result motivate Burmeister to continue working hard, but it also should give Haskell confidence to rise and take the position.

The Aztecs Offensive Line is in trouble

SDSU is thin on the offensive line. They did not have enough players to split up the unit into two groups. The last time they held a Spring Game with offensive linemen wearing gray jerseys was 2019. That year was the only time the Aztecs failed to win double digits.  With all the linemen playing for both teams, the starters played together a lot and gave up eight official sacks – one coming from a Burmeister dropped snap. If the referees had chosen to be picky, they could have added more to that total. On at least four other times, defenders touched the quarterback, but they allowed the play to continue.

“Well, we got a young offensive line,” Hoke said. “We have some young defensive lineman, they have to continue to make strides. I mean, we’re in two-minute drill and they’re watching the ball downfield instead of going to chase it. So, it’s baby steps with them, and Mike’s done a great job and we’ll keep plugging away at it and they have to have a great summer. I mean, that part of it is going to be huge.”

In fairness to the line, it was clear most of the plays were going to be passing attempts. Only 25 rushes were called to the running backs. Defenders pinned their ears back to attack the quarterback. There was no semblance of a sustained effort to run that ball or a screen game to keep pass rushers honest.

All nuance aside, the team is ready to compete at nearly every position. After last night, questions remain about the kickers and the offensive line. SDSU won a dozen games a season ago relying on a stout running game, good defense, and great special teams. Having weaknesses in two of those areas will keep the staff working hard in the offseason.

If there is a position where a player could come in during the summer and catch up to speed quickly, it is the offensive line. Look for the Aztecs to be busy in the portal over the next few months.