In the midst of Matt Araiza’s historic season performing all three kicking duties and setting a punt yardage record, one aspect of his responsibilities continued a downward trend.

Whether Araiza’s regression was directly correlated to the extra responsibilities presented by performing all three duties is hard to assess. While this aspect of his game did not prevent a historic 12-win season, the Aztecs will be looking to greatly improve their success rate in 2022.

Part three (and final) of EVT’s special teams season preview details the field goal kickers who will be vying for the starting role and includes thoughts from an exclusive interview with special teams coordinator Doug Deakin. 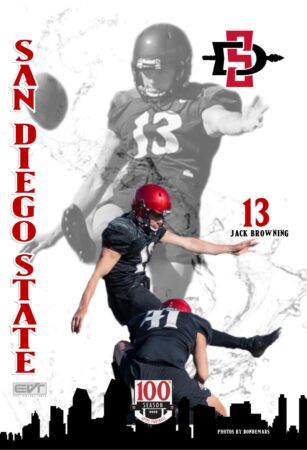 Confidence in the starter(s): C

It’s hard to grade the confidence in a starter when the coaching staff is unsure of who that starter will be heading into fall camp. As detailed in EVT’s season preview of the punters, Jack Browning won the punter role coming out of spring camp and is competing to match Araiza’s role from last year, performing all three kicking facets.

“Ya, I’d say punting is ahead of his field goal and kickoff,” Deakin said when asked if one facet is ahead of the others for Browning heading into fall camp. While Deakin noted Browning did a nice job in the spring on field goals, it was not good enough to win the starter role over fellow junior David Delgado and redshirt freshman Collyn Hopkins.

“All three were right around 70 percentile (through the duration of spring camp)…and that’s not good enough,” said Deakin. “There are things to be worked on here in the summer and into fall camp for solidifying who really is our number one field goal kicker.”

Deakin explained that ideally, the starter would be identified by which kicker can surpass the 80 percent success rate in fall camp scrimmages and game-simulation attempts.

The ineffectiveness of the specialists on the roster forced the staff to dip into the transfer portal. Walk-on Jarrett Reeser was brought in to help improve the competition at the spot even before the academic issues arose that will keep Hopkins from participating on the team for the 2022 season (as noted in EVT’s season preview.)

Deakin provided the rationale for why the Aztecs employed two different snappers last year and why that may change this season.

“On field goals, it’s about a 1.3 to 1.5-second play and obviously a shorter distance snap, but body size does matter. As an incoming freshman, (Wintermeyer) played at about 205 lbs, whereas Rabb was right around 230 to 250. He had much wider shoulders bigger, stout presence, which helps the field goal protection. (Wintermeyer) has added the freshman 15 due to the strength and conditioning and meal program and working his way to earning the starting spot in field goals. Snapping wasn’t the issue, just size.”

Deakin also noted that Chavez already has the size (6’3 and 240 lbs) to compete at both snapper spots, but given Wintermeyer’s experience, Chavez would have to go above and beyond to unseat him. 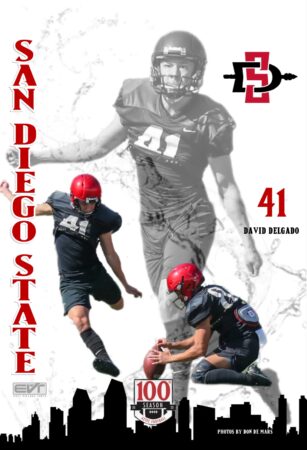 Browning converted 4 of 6 field goal attempts (long of 38) and 14 of 16 PATs in his one season at Grossmont College in 2019 before transferring to SDSU. Among the known commodities, he figures to have the upper hand in the competition heading into fall camp, given Hopkins’ departure from the team and Delgado’s recent injuries. He will have to juggle the kicking roles and duties alongside punting, which may prove difficult for a player who has yet to do either.

Delgado was named the Special Teams MVP as a senior at Hilltop High in Chula Vista, converting 7 of 12 field goal attempts and 43 of 48 PATs. Delgado recovered from injury last season to insert himself into the mix this spring.

“He was a lot further along than I thought he would be,” Deakin said. “Best part about Delgado is how hard he works…you try to reign him in and pull him back from doing too much or overexerting.”

According to Deakin, Delgado improved his kick trajectory from last season to keep the balls from getting batted down at the line of scrimmage.

Reeser, the newcomer of the group from Canyon High in Canyon Country, CA, finished his varsity career converting 9 of 10 field goal attempts (long of 46) and 33 of 34 PATs.

“I would have recruited him out of high school (in the class of 2021)…but we had (Araiza) and didn’t expect him to leave after his junior season to the NFL,” Deakin noted while highlighting Reeser’s leg strength and soccer experience playing in Italy.

None of the three kickers vying for the starting role have attempted a kick in Division I football. Given Deakin’s admission that the kickers in spring camp hovered only around the 70% mark, it is fair to question the proven depth of the trio and identify the spot as one of the biggest concerns on the team heading into fall camp. However, as Araiza showed in his redshirt freshman season by setting the school’s single-season record with 22 field goals, lack of experience does not have to equate to lack of success. 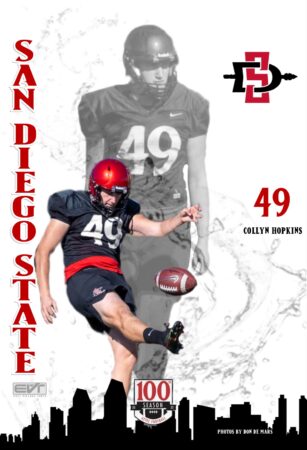 Replacing the star power of Araiza from a season ago would be difficult for any player, let alone a walk-on specialist. Following the mantra “be a star in your own role” is one that the kickers should embody as they look to replace Araiza in 2022. Ultimately, making a high percentage of your field goals and PATs and making the ones in the final minutes to win games will endear any specialist to his teammates, coaching staff, and fanbase. It remains to be seen which one of the three will have the first crack to fulfill the mantra.

Despite the Aztecs not having a solidified field goal kicker heading into fall camp, the Mountain West Conference is loaded with talent. Five kickers were named on the Lou Groza Award Watch List, presented annually to the most outstanding kicker in the nation, the most by any conference.

There isn't a conference in America with more on the list 💪#AtThePEAK pic.twitter.com/AJV2pUUhNI

Dalmas was named on the Preseason All-Conference Team last week and is the reigning 2021 All-Conference First-Team member after converting 26 of 28 attempts (93%) last season.

Gutierrez and Shipley converted the next highest percentage of field goals last season, at 89% and 86%, respectively. Gutierrez and Camper tied for the longest made field goal (53 yards) with Araiza.