Cameron Thomas was nothing short of sensational in 2021. Despite opposing offenses designing their attack to minimize his impact, the Mountain West’s Defensive Player of the Year was virtually unstoppable. Every game last season except one (UTSA), he recorded at least one sack or QB hurry.

It is remarkable that the Aztecs can lose a player of Thomas’ impact and still have one of the top group on the west coast. The fact is SDSU’s line could be swapped out for many of their counterparts in the Power 5 schools and it would be a downgrade for the Aztecs. While the players deserve the credit for the improvement, it is difficult not to notice the rise in play from the position since Brady Hoke returned to the Mesa. 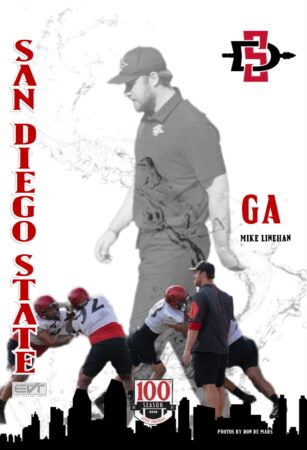 Rocky Long called Hoke the best defensive line coach in the country when he hired him in 2019. That praise is proving true. The linemen playing at such a high level came in with the same high school resumes as previous groups, leaving coaching as the primary difference. Hoke is not alone in supporting the line.

Former NFL linebacker and Utah State defensive coordinator Justin Ena was hired to replace Jordan Thomas when the Browns hired him away from the team. Ena brings a world of experience and coaching talent to the position. Graduate assistant Mike Linehan rounds out the coaches officially dedicated to helping SDSU’s defensive line reach their potential.

SDSU alum, La’Roi Glover, assisted the group as a volunteer assistant last year, traveling with the team and helping Mattix’s defense. Though Glover is not in this role in 2022, his contribution to the makeup of the line should not go unnoticed.

“I look at a guy like Keshawn and I look at a guy like Jonah and talk about the leadership, not only for just the defensive line but for the whole defense or even a whole team,” defensive coordinator Kurt Mattix explained in an exclusive interview. “The amount of snaps that they’ve taken and what they mean for our program is just priceless. You can’t put anything on that just from a standpoint of what they mean on a daily basis, how they go about their work, and the leadership they provide. Sometimes it is vocal, sometimes it’s just watching how they work and you’re going to see, ‘Ok, this is what it takes to be successful.” 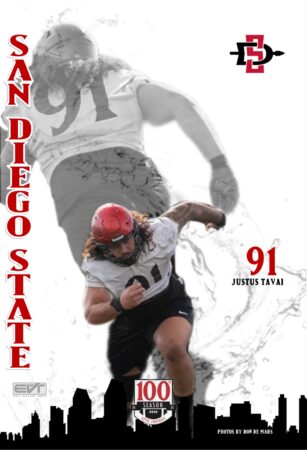 Confidence in the starters: A

Mattix has a few options as he builds his defensive front in 2022. He could employ a traditional 3-3-5 front with quicker, smaller linemen moving and stunting to create penetration into the backfield. In this option, Jonah Tavai would play the nose tackle with Keshawn Banks and Garret Fountain as the defensive ends. Mattix could also use a more traditional three-man line with Justus Tavai as a taller, space-eating nose tackle with his brother Jonah and Banks at end.

Mattix’s choice is not an either/or, but a both/and. SDSU has four starters for three positions, giving them versatility and making them even more challenging to scheme against. During the opening practice of fall camp, Banks was allowed to rest for half the practice. Justus Tavai slid over to Banks’ spot, Jonah played nose tackle, and Daniel Okpoko ran with the starters at right end.  Expect Fountain to be used a lot in clear passing situations with Justus Tavai used when the intentions of the offense are less clear.

“If we had to start today,” Mattix said. “It’s going to be Garret or Jonah. Not that we have talked as a staff or anything like that. As we ended spring, we said Garret has done enough to sit here and say he’s done a nice job. But, I also know Jonah is athletic enough to (play NT or DE). The biggest question is where Justus is at. … Schematically, we always like to be as good as we can be from nose on back. You look at your nose guard to your Mike linebacker to the Aztec of our defense in that order. You want to be good down the middle and then have good edges and funnel everything back to your better players. That might mean Garret, Jonah at nose, and so on and so forth all the way back to your Aztec.” 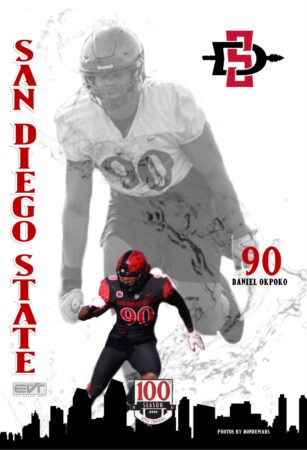 The reserves are a mix of promise and production. It begins with the person not officially a starter in the discussion above. Behind all of the starters are upperclassmen. Okpoko is a senior. Backup nose tackle Nassir Sims is a junior, as is backup end, Wyatt Draeger.

The news following the first day of practice is Deven Lamp and redshirt freshman lineman Pa’a Ewaliko are no longer on the team. Junior walk-on Dylan Taylor was even with Lamp on the depth chart and ran with the second unit at Friday’s practice. Keion Mitchell played nose tackle at 250 pounds with the third team. True freshman Ryan Henderson is physically mature enough to play right away. Add in that linebackers Cooper McDonald and Dominic Oliver can play with their hand in the ground and the depth is fantastic.

If any of the backups were being counted upon to produce for an extended number of snaps, they would be a question mark. Since they are being utilized in a more limited role, they are a strength on the team. As fresh players off the bench, they will be better at times than the tired starters while allowing those in front of them to rest.

“Our depth is a strength,” Mattix said. “That’s part of coach Hoke’s philosophy as far as trying to play (multiple linemen) and keep people fresh. But, I think we have playmakers in that room whether that be Jonah Tavai, whether it be Keshawn Banks, that proved that last year. A couple of wrinkles under the covers that no one really knows about would be like a Justus Tavai that we think had a really good spring and is really coming around learning our system and knowing that. A guy like Garret Fountain, who we made that position change. He’s bought in and put on some good weight and still moving like the outside linebacker he was for us. Some dark horses whether it be like a Nassir Sims or a Wyatt Draeger or a Dan Okpoko.” 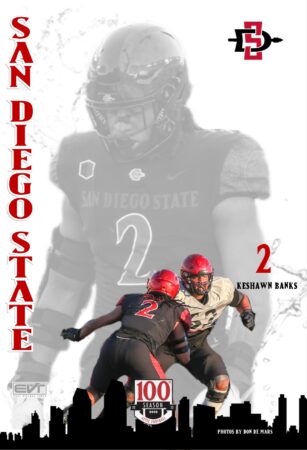 Last October, SDSU took on Air Force on the road. Despite an uncharacteristic turnover on their first possession, the Falcons dominated the pace of the game in the first quarter. SDSU led 3-0, but AFA was on the brink of pulling off one of those methodical, back-breaking drives only option teams can accomplish.

On the second play of the second quarter, Air Force head coach Troy Calhoun, sensing this momentum, elected to go for it on fourth and one from his own 44. At the snap of the ball, Keshawn Banks dove between the center and left guard and pulled down Falcons QB Haaziq Daniels for a two-yard loss. The stop was the type of spectacular play Banks has made throughout his Aztec career.

There are few players in the country who can match Banks’ big play ability. He is the most talented player on the line with the highest ceiling. The problem is he disappears for stretches of games as well. Banks could play his way into an NFL Draft selection if he can learn how to produce consistently.

“To be honest with you, I don’t really know,” Mattix said about what he is expecting from Banks. “What I want from him is one or two tackles for losses per game and at least one sack per game and just be a guy that sets the edge. He has the world at his hands, he’s extremely smart. He prepares very well. He’s a very athletic guy. Sometimes he struggles getting his feet in the ground … sometimes takes too long of a stride, maybe he doesn’t play the block perfectly, but he’s sudden, he’s twitchy, he’s athletic, he’s tough.  I really believe he came into his own last season.” 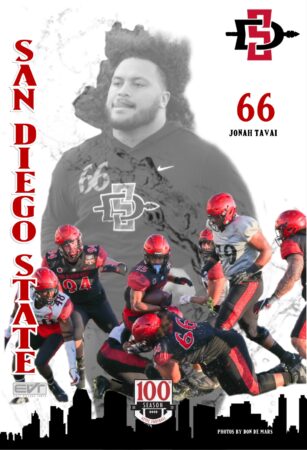 Banks might have the greatest NFL potential, but Jonah Tavai is the biggest star on the Aztecs’ defensive line. Like Banks, Tavai was slated as a Preseason All-MW selection. Last season, Mattix employed Tavai in a variety of ways, even standing him outside and bringing him off the edge in the Frisco Bowl. Expect Tavai to be moved all over this season too.

Tavai is blessed with and has cultivated a terrific personality that his teammates love. Football can be a cookie-cutter sport and with players like the Rams’ Aaron Donald (6’1 280 lbs) dominating the sport, there may be a place for SDSU’s linemen in the NFL. In 2022, the Aztecs’ front will be led by their star player, Jonah Tavai.

“I see him playing both,” Mattix said when asked where Tavai will line up. “The one thing -I’m trying not to make light of it-but he can be vertically challenged if you get a chance to talk with Jonah. That being said, watching him go against BCD (Brandon Crenshaw-Dickson), one of our right tackles in our offense, who’s 6’7, 6’8, the leverage base, the power base (Tavai) has coming off the edge can give taller offensive tackles a problem. You talk about a reach advantage that maybe (a tall OL) has, but you’re still getting a 285, 290-pound athlete that can really do some special things. I really believe with the way Jonah is training now, he’s really going to do some stuff that people are going to say, ‘where did this guy come from?” 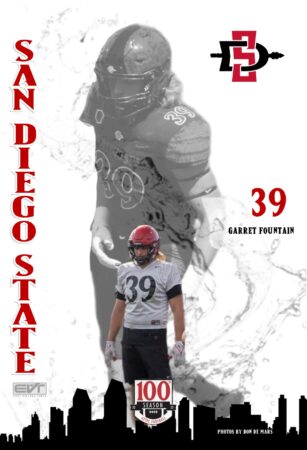 Compared to the rest of the conference: A

Aside from the Aztecs, only San Jose State can lay claim to having the best line in the conference. Of the 18 players who received All-MW recognition in 2021, eight return this season. Half of those play for SDSU and SJSU. The Spartans are led by Cade Hall and Viliami Fehoko. Boise State (Scott Matlock) and Fresno State (David Perales) return players who earned second-team honors last year. New Mexico (Joey Noble) and Wyoming (Cole Godbout) bring back players on the honorable mention list in 2021.

It is interesting that Hall and Tavai, honorable mention selections last year, jumped Perales to be included in the First-Team Preseason team. Even more noteworthy is that Hall was chosen over Fehoko as the Co-Defensive Player of the Year. Fehoko was a First-Team All-Conference player a year ago. These peculiarities aside, the Aztecs’ defensive line stands out as one of the top two in the Mountain West.

“Great question and I would say, ‘yes,’” Mattix said if SDSU was in a position to have legit players at all spots on the defense. “There might be a little bit of a talent gap or a size gap or a little bit of speed or twitch gap between Player A versus Player B. … as coaches you spend a significant amount of time on the season, then you spend a significant time in recruiting. We’re always trying to find, in the recruiting process, the next Cam Thomas, the next Jonah Tavai, the next Caden McDonald.”

My earliest sport's memory involve tailgating at the Murph, running down the circular exit ramps, and seeing the Padres, Chargers and Aztecs play. As a second generation Aztec, I am passionate about all things SDSU. Other interests include raising my four children, being a great husband and teaching high school.
Tags: Aztecs, Cameron Thomas, Jonah Tavai, Kurt Mattix, SDSU