The Aztecs started off the week by demolishing UNLV at home, only to play poorly on the road against rival Utah St. two nights later. Here are the takeaways from the week:

Has the Matt Bradley Aztec fans were promised finally arrived? It’s starting to seem like it. In the last two games, he has shot a combined 18-23, 78% from the floor. He’s averaged 23 points, six rebounds, and 4.5 assists over the last two games. He looks different on the floor too. This week he would still play some hero ball, especially in the loss to Utah St, but he was more aggressive trying to get to the rim. The numbers over the last two games aren’t sustainable, but the shift in mindset bodes well for the future.

Bradley started off the season really slow but, through five conference games, has averaged 19.2 points on 60.7 TS%. Those will both be career highs in conference play if Bradley maintains them. Considering that the five-game sample includes his 3-13 performance against Boise St, they’re really good numbers, and they are much more sustainable than the two-game stretch this past week. If Bradley continues to play the way he has, the Aztecs should be in good shape heading forward. It is a big IF, though.

This team has been wildly inconsistent all season, especially offensively. The defense has been the saving grace. Even in their worst defensive game, the Aztecs still had an above-average adjusted defensive rating.

The offense has been the real culprit. The offense was below average to start the season, as measured by adjusted offensive rating. Then, it got worse around thanksgiving. The team seemed like they were starting to figure some things out against St. Mary’s and went on stretch where four of the next six games had adjusted offensive ratings of 110+, which is well above average. The two games of below-average offense were at UNLV when the Aztecs had no point guards and home vs. Boise St. in the first game back from Covid pause. Those are both understandable reasons to have bad offense. Playing UNLV at home seemed to get the team back on track, and then they laid an egg against Utah St. 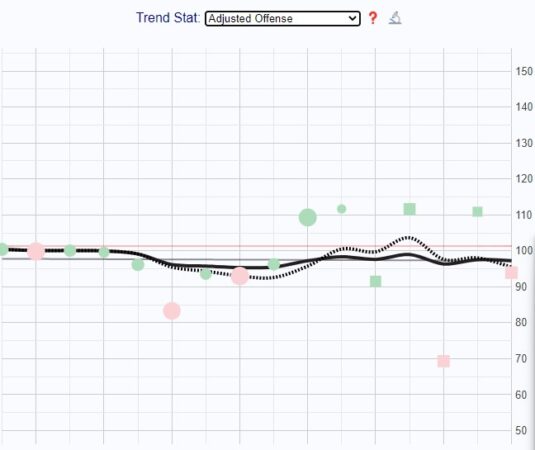 It could be the case that the team was really figuring things out, and the Covid pause just came at a really unfortunate time. After the pause, the team may be starting back from square one and may need time to get good offense consistently. That was a possibility that was pointed out in this series a few weeks ago. Another outside factor, especially in the case of the Utah St. game, is that playing three games in five days, with the last one at elevation, can be hard. If not for the toll it puts on bodies, then for the lack of preparation time to figure out what to do against the opponent.

It is also possible that this team is just inconsistent. Something about their mentality or approach may be holding them back from making solid progress. The next few weeks will tell which it is, as there are currently no stints of three games in five days for the next few weeks, and the team should not have to go on another Covid pause this season. Speaking of the next few weeks…

The Aztecs are entering the easiest part of their conference schedule. Four of the next six games are at home, where the Aztecs are hard to beat. Four of the next six are against teams ranked worse than 100 in the NET. The worst team the Aztecs have lost to was Utah St. on the road, which is currently ranked 62 in the NET. They also have at least two days in between all of the games except for one, which is a home game vs. Nevada on February 6th.

Going 6-0 in the next six games is possible but shouldn’t be expected given the inconsistencies the team has had. Going 5-1 is more realistic. It would require beating New Mexico, Nevada, and Air Force at home and San Jose State on the road. Those teams are a combined 6-20 in conference play, but all pose their own unique problems and can not be taken lightly. In addition, it would require either beating Colorado St. on the road or beating Utah St. at home.

The Aztecs demolished Colorado St a few weeks ago, but they were at Viejas, and the Rams were recovering from their own Covid pause. Playing at elevation with both teams healthy will be a different game. It is still winnable but different. Utah St. poses the opposite problem. The Aztecs lost to the Aggies by 18 on the road but were on the tail end of Covid pause effects, playing their third game in five days, and at elevation. So playing them at home, with a few days to prepare, will also be a different game.

The schedule becomes a gauntlet in the last few weeks, especially if the game at Wyoming is made up for. With that in mind, 6-0 would be ideal both to buffer the conference standings and improve the resume. 5-1 is realistic, would also help buffer the conference standings a bit, but likely doesn’t improve the resume much. Going 4-2 over the next six games may not mathematically eliminate the Aztecs from an at-large bid but would eliminate them in terms of practicality. That makes the next six games vital. No team can be taken lightly. The time to figure things out is now.