San Diego State, of course, is no stranger to Championship Saturday. Only twice, since 2009, have the Aztecs failed to make the final game. Making the conference tournament has become routine. Winning it has been a different story. The Aztecs are 3-7 in the last ten conference championship games.

What can explain the disparity between SDSU’s success in the earlier rounds and their lack of success in the last round? There are certainly a number of factors. Chief among is a schedule that demands three games in three days. The result of the unique schedule is that the Mountain West season’s final game is typically the worst basketball played the entire conference season.

The combination of little scout time, the exhaustion of playing a game the previous two (or three) days, and the winner takes all stakes produces games where the better team has less of a chance to win than playing under normal circumstances. Thus, SDSU, which has a 21-2 record since 2009 in all other rounds of the tournament, has only three wins in the final.

Scoring is the main casualty of playing three times in as many days. In the rounds before the final, SDSU has averaged more than 68 points during this same time frame. They have scored in the 50’s only three times in 23 games. In the final, they average less than 60 points a game. The Aztecs have scored in the ’50s in seven of their last 10 finals.

If the Aztecs are going to continue their early-round success while reversing the trend of falling short in the finals, it will be because they followed the paths laid out for them by the five seniors on the team. Throughout the year, each of the seniors has tried to mold the team in a particular way. Through their example and through their words, they have been preparing the Aztecs for March Madness.

Following two losses against Utah State, the Aztecs were 3-3. Beginning in the postgame press conference following the second game, a word kept coming up over and over in the coming weeks: aggressive. Repeated again and again, usually from the lips of SDSU’s senior guard, was a call to have an aggressive mindset in everything they did on the court. 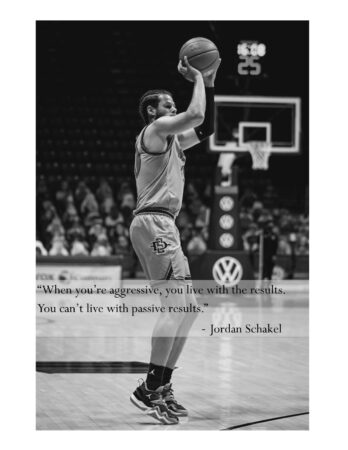 Exhaustion breeds passivity. Rested players move their feet better on defense. They attack the basket instead of settling for jump shots. They prevent easy basket because they have the energy to get back on defense. The rigors of the schedule this week will beg the players to lose their aggressiveness.

To bring the conference title back home, the team will need to pay heed to Schakel’s mantra and adopt an aggressive mindset throughout the tournament.

Matt Mitchell: Off the Script

Mitchell deservedly won the Mountain West Player of the Year Award. He was the best player on the best team who has consistently embodied a team-first approach. Throughout the year, his message to the team was simple.

In conference play, the scouting is so detailed both teams know each other’s plays, each other’s tendencies, and the strengths of each player on the roster. Winning and losing comes down to players making plays off-script. Getting a loose ball, unexpectedly getting a steal, or finding a way to score apart from the coaches’ designs is essential.

Aztec fans know full well games in this tournament usually comes down to a player making a clutch shot to carry his team to victory. The last time SDSU won this tournament, Trey Kell made dagger after dagger on his way to earning tournament MVP. Last season, of course, the game came down to Sam Merrill hitting an amazing shot. For SDSU to double up their championships in 2021, they must attend to Mitchell’s tutelage and make plays outside of the offensive and defensive sets.

Terrell Gomez: Push the pace and score in transition

Finding Gomez’s place on the team has been a topic of conversation all season. Clearly better starting than coming off the bench. There have been stretches of games where Gomez has carried the team offensively while playing defense at an increasingly higher level as the season has progressed. Yet, his biggest impact on the team has been his leadership in getting the offense to play with greater tempo.

Gomez’s message has been consistent. He is an expert at fast-paced offense from his time at Cal State Northridge. He knows how pushing the ball with purpose and hunting a good shot early in a possession rewards and invigorates a team. SDSU plays so hard on defense. They should make it easy on themselves by getting out in transition.

The games will likely be close this week, with only a couple baskets separating the Aztecs and their opponents. Any easy, fast breakpoints could be the difference in the game. SDSU would be wise to follow Gomez’s sage advice and push the ball as often as opportunity allows.

Tomaic has been a terrific addition to this team. There have been numerous games where he was the best center on the court. His value to the team is seen beyond the box score. Tomaic brings tremendous energy every time he steps on the floor, from grabbing an offensive rebound to chasing down a loose ball.

That energy is contagious. He has stated on more than one occasion. He intends to infect the rest of the team with his style of play. Following Tomaic’s lead might be the only way the Aztecs can walk away with the hardware on Saturday. Their shots likely will not fall if they make it to the championship, but if they can play with Tomaic’s passion, they can be victorious.

Trey Pulliam: It’s all about winning

Tre Pulliam has been an “x-factor” for this team his entire career. For the Aztecs to be at their best, they need Pulliam to be elite. Most of the season, fans and the media alike have compared and contrasted Gomez, Lamont Butler, Adam Seiko, and Pulliam as if they were competing with each other and not on the same team. Together, the four of them have formed a complementary unit. Mountain West Coach of the Year Brian Dutcher has used the group effectively.

Throughout the year, Pulliam has said – he reiterated it at the press conference this week – his only care for this team is winning. It does not matter to him if he is dishing out eight assists like he did last game against UNLV or scoring 18 points like he did two games prior against Boise State. He simply wants to win.

Putting Pulliam’s focus into practice is precisely the recipe for success in this tournament. Hero ball seldom works. It takes a collective effort where people fill whatever role the team needs on a given night. Trey Pulliam has been that type of player all season, and the Aztecs would be wise to follow in his footsteps.

My earliest sport's memory involve tailgating at the Murph, running down the circular exit ramps, and seeing the Padres, Chargers and Aztecs play. As a second generation Aztec, I am passionate about all things SDSU. Other interests include raising my four children, being a great husband and teaching high school.
Tags: SDSU, SDSU Basketball, SDSU Men's Basketball, SDSU MW Tournament