The Mountain West regular season is over, and the San Diego State Aztecs are the regular-season conference champions. SDSU now enters the conference tournament with 11 straight wins. The Aztecs hold a 20-4 record with a 14-3 conference record.

This doesn’t impact March Madness, but the Aztecs are ranked in the AP Poll at number 19. The final AP Poll will be released on March 8, when the Aztecs may rise one last time this season.

Offensively, San Diego State is not as strong, according to KenPom. This is no surprise to anyone who watches SDSU basketball. However, the offense is still better than average, ranking 48th in the nation with an adjusted offensive efficiency of 110.7, meaning they’d average 111.0 points per 100 possessions.

The Adjusted Efficiency Margin is the difference between your adjusted offensive and defensive efficiency, or how much you would beat an average team by if each team got 100 possessions. San Diego State’s 22.40 adjusted efficiency margin ranks 19th in Division-I, which is just behind their AP Poll ranking.

NET, NCAA Evaluation Tool, rankings are the official rankings used by the selection committee when seeding for March Madness. The Aztecs are currently ranked 19th by the NET.

These rankings also define how strong all wins are, separated by four quadrants, with Quadrant 1 wins or losses being stronger, while Quadrant 4 wins or losses being weaker. The quadrant wins are also adjusted to where the event is played, rewarding a road win more than a home win. How each game is deciphered by quadrant can be seen here: 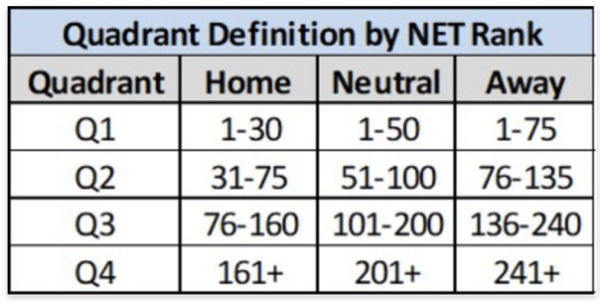 In terms of quadrant records, San Diego State finds itself in a weird spot. The Aztecs missed all of their big opportunities to pick up big wins, as they are 0-3 in Quadrant 1 games – loss vs. BYU & the two losses on the road against the Utah State Aggies. For Quadrant 2, the Aztecs are 6-1, with their lone loss against the Colorado State Rams. SDSU is a combined 13-0 in Quadrant 3 and 4 games.

There are a few teams of interest regarding San Diego State’s NET rankings.

The Boise State Broncos, whom the Aztecs will beat twice at the end of the season, are currently ranked 42nd in the NET. If Boise State and San Diego State win their first-round matchups in the Mountain West Conference tournament, they will face each other for the third time this year. This game will be a Quadrant 1 game for both teams because it is a neutral site game. A Quadrant 1 win will boost the Aztecs’ resume significantly.

The win early in the year on the road against the Arizona State Sun Devils seemed like a monumental win at the time. However, ASU is not meeting their pre-season expectations, and that game is in slight danger of going to a Quadrant 3 win after ASU fell 14 spots following their blowout loss to the Utah Utes.

A fun thing to do leading up to March Madness is to look at all of the projected brackets from some of the bracketology experts.

There are a ton of places to look at brackets, but one place organizes them all into one. The Bracket Matrix takes all professional bracketologists and puts each team into the matrix, which spits out the average seeding of each team. There are no matchups on the matrix, but it is still a helpful tool.

Looking at some of the more popular bracketologists, the Aztecs are comfortably in their fields of 68.

ESPN’s Joe Lunardi updated his bracket on Saturday following the conclusion of games that day, and he thinks SDSU is the seven-seed in Region 3. Lunardi cites the St. Bonaventure Bonnies as the first-round opponent for San Diego State. The Bonnies will play in the Atlantic-10 Conference championship on selection Sunday. Michigan is the top seed in Lunardi’s Region 3.

Jerry Palm of CBS Sports is another well-respected bracketologist. He is less high on the Aztecs, slotting them in as his top nine-seed. Palm’s projected first-round matchup for San Diego State is the LSU Tigers. Palm last updated his bracket on Sunday morning before games started.

San Diego State will make the field of 68 and be playing in March Madness. They are a polarizing team to bracketologists because the Aztecs are the highest-ranked team that is winless in Quadrant 1 games(Colgate is yet to play in a Quadrant 1 game and will not in the remainder of their schedule). Some bracketologists are honoring San Diego State’s dominant win streak and two wins over Pac-12 opponents, while some aren’t.

The Mountain West Conference tournament provides the Aztecs with multiple chances at Quadrant 1 wins, barring a disaster from Boise State or Utah State/Colorado State. A win over any three of these opponents on a neutral court is a Quadrant 1 victory. Utah State and Colorado State are currently on the edge of a Quadrant 1 win on a neutral floor. Still, it is reasonable to assume that if either of those teams makes the championship with two wins, whoever the opponent is for Aztecs will be in the top-50 of the NET.

Boise State, Utah State, and Colorado State all find themselves in the bubble, and a win over SDSU is a huge boost for Boise. A loss to either Utah State or Colorado State would result in an automatic NCAA tournament bid as the MWC tournament champions. Simplified, every team the Aztecs play in the conference tournament will be playing for their lives, so the Aztecs will need to be prepared for the best.

Things will get very interesting in Las Vegas, but no matter the result, the Aztecs will be playing in Indiana for March Madness.