Before diving into this week’s keys, let us revisit last week’s three keys to victory against Fresno State and how they impacted the Aztecs’ first loss of the season.

Hold Fresno State to less than 33% conversions on third downs

The Bulldogs converted 50% of their 18 third-down conversions in the game, including 7 of 11 (64%) in the first half when they took control of the game. On their first touchdown drive of the game, they converted all four of their third downs, two by pass and two by run. Coach Hoke spoke post-game about how disappointing it was to allow 50% third-down conversion, which played a big part in the loss.

Quarterback Lucas Johnson threw two interceptions and lost a fumble, accounting for all three Aztec turnovers in the game. The Bulldogs scored 17 points off those three turnovers while only committing one turnover themselves that did not lead to any San Diego State points. A -2 turnover margin was a recipe for disaster for the Aztecs against such a prolific offense.

Limit the negative plays on offense to less than three

Here are the three keys to victory against Hawaii this Saturday. 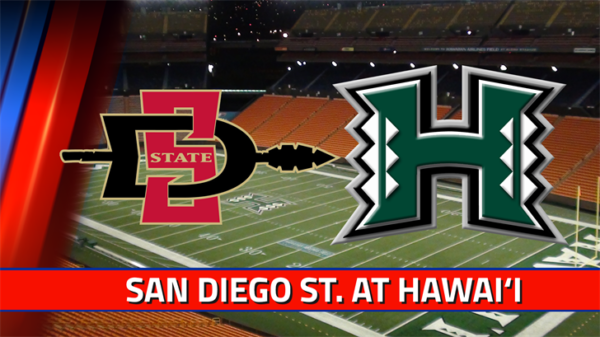 Rush for at least 200 yards

After rushing for at least 200 yards in each of its first five games of the season, the Aztecs have been held under 200 yards in the last three games. The Aztecs are 52-2 in their last 54 games in which they have rushed for over 200 yards. The Rainbow Warriors allow 152 rushing yards per game, ranked 70th in FBS. In last year’s matchup, the Aztecs rushed for 326 yards and three touchdowns against the Hawaii defense. The Aztecs need to get back to what they do best, utilize their stable of talented running backs behind a physical offensive line. Additionally, after quarterback Lucas Johnson rushed for 60 yards on eight carries against Fresno State, coach Hoke said he would like Johnson to run even more.

Get at least four sacks

In last year’s dominant performance against Hawaii, the Aztec defense tallied seven sacks for 64 yards lost. The Aztecs have 23 sacks through eight games this season but only managed five for 31 yards lost in their last three games. While they have continued to be aggressive and had free rushers to the quarterback, they have been unable to bring the quarterbacks down and allowed them to make plays outside the pocket. The Hawaii offensive line is one of the most experienced in the country with a combined 151 starts, but they have conceded 27 sacks for 178 yards lost this season. Given quarterback Chevan Cordeiro’s ability to run the football, keeping him in the pocket and bringing him down for sacks will be critical to the outcome of this game.