On Friday, news broke of the University of Rhode Island’s decision to fire Men’s Basketball Head Coach David Cox. In the interconnected world of college basketball, the waves of that decision reverberated across the country and could impact SDSU’s roster make-up next season. The Monday following URI’s announcement, four Rams entered the transfer portal. On Tuesday, Rhode Island’s lone incoming recruit, Chance Stephens, asked for his release from the Letter of Intent he signed in November.

Stephens choose URI over an offer from the Aztecs. SDSU was among a handful of schools recruiting the wing player from Riverside the hardest before his commitment. With Stephens once again looking for a school, could the Aztecs be a fit for Stephens this time around?

“SDSU is a great school with a great program; it’s always an option,” Stephens told EVT. “For me, what is really important is the relationship I build with the coaching staff and the fit. Some people think I’m only a shooter, but I have a complete game. I’m looking for a school that sees me as that.”

From the outside, Stephens’ initial choice of Rhode Island seemed peculiar. Why would a west coast kid choose an east coast school that has only been to the NCAA tournament twice in his lifetime? The answer is his father grew up in the D.C. area and has known Cox and former URI assistant David Sutton for most of his life.

That connection was at the center of Stephens’ commitment. One of Cox’s first decisions as head coach was to extend the 6’3” sharp-shooter a scholarship, never mind that Stephens was only in the eighth grade. Honesty, integrity, and true caring have nearly left college athletics, so the opportunity to play for someone whose relationship extends far beyond basketball was too good to pass up. It also makes Cox’s dismissal that much more difficult.

“It’s emotional when you build a relationship with a head coach and the coaching staff and have your heart set on playing there for the next four years,” Stephens said.

Stephens, nicknamed ‘The Sniper,’ continues to rank relationships high as he looks for a new program. It is here that SDSU might have an advantage in his recruitment. His former teammate at Riverside Poly High School is current Aztec Lamont Butler. 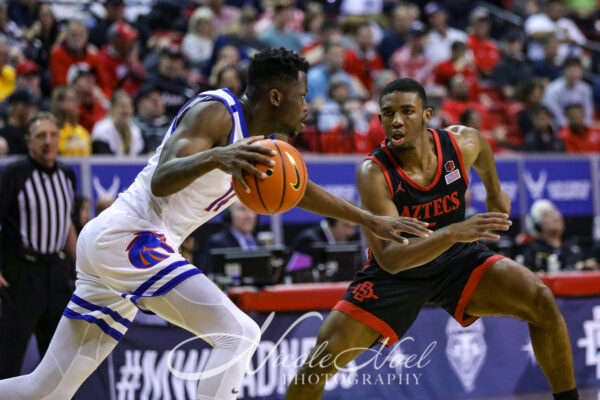 “Playing with Lamont again would be amazing,” Stephens explained. “To me, he is one of the best point guards in the country when you talk about running a team. He’s become more of a complete player since he has been at SDSU. Plus, he’s my good friend.”

More than his athleticism, maturity, or motor, people around Butler rave about the type of person he is. Just the mention of his name brings joy to his teammates and coaches, who go out of their way to shower praise on the sophomore guard. SDSU’s staff has already built a relationship with Stephens, and the opportunity to be around Butler might be enough to convince ‘the Sniper’ to bring his talents to San Diego.

Part of this equation hinges on if the Aztecs have a scholarship available for him in 2022. The NCAA limits the number of full-rides to 13. SDSU is currently using its full allotment. Trey Pulliam and Joshua Tomaic are out of eligibility, with Miles Byrd and Elijah Saunders already signed to fill their spots. Tahirou Diabate, Nathan Mensah, and Aguek Arop all have eligibility remaining, but it has not been announced if they are staying with the team. Their decisions will certainly impact the scholarships available.

Brian Dutcher initially had three high school players committed to the program before Koren Johnson withdrew his pledge, eventually ending up with the University of Washington. Could Stephens take Johnson’s place?

“It’s important that I take my time with this process,” Stephens said. “I’m going to take some official visits to schools I’m interested in attending. I have to be a little patient because some programs are in the NCAA tournament, but I’m making my decision when it feels right.”

Stephens’ patience in this process is perfect for the Aztecs as they pursue a deep NCAA run. It also gives the coaches time to fully assess their needs for next year. Most coaches look for players to fit their system. Dutcher has shown tremendous acumen-building systems that fit his players. Nearly every season in his tenure, the Aztecs’ lineup has had a different look and focus. The one common thread, however, has been elite defense. Players only see the court if they can process and play in the Aztecs’ professional-level defensive approach.

“Yes,” Stephens responded emphatically when asked if defense was part of his game. “I feel playing great defense is a part of having a complete game. My defense is solid. When Lamont left, it was my assignment to guard the best player on the other team.”

SDSU’s head coach prefers “positionless” basketball players who can fill multiple roles. With the attention the staff already paid Stephens, there is no question they see him as more than just a shooter. While it remains to be seen if Stephens and the Aztecs are fit for each other, Dutcher’s track record suggests success if Stephens chooses to do his sniping in America’s Finest City.

My earliest sport's memory involve tailgating at the Murph, running down the circular exit ramps, and seeing the Padres, Chargers and Aztecs play. As a second generation Aztec, I am passionate about all things SDSU. Other interests include raising my four children, being a great husband and teaching high school.
Tags: Aztecs, Brian Dutcher, Chance Stephens, College Basketball, Lamont Butler, Recruiting, Riverside Poly High School, SDSU