Over the next two weekends, beginning tomorrow, San Diego State Football will be hosting a pair of 7-on-7 passing camps and a skills competition for high school football teams and individuals.

“The purpose of bringing tons of student-athletes to campus is to evaluate, coach, and give them a great experience at San Diego State University,” Ruben Pena, SDSU’s Director of Football Operation, told EVT in an exclusive interview. “It gives the coaches a good glimpse at these players that come on campus and are able to talk face to face and really get to see their character and really get a sense on how they are doing academically.”

In addition to the recruiting benefits, this year’s camps hold special significance. It is the first on-campus in two years. Covid restrictions canceled the 2020 and 2021 iterations of the event.

The passing camp was the brainchild of former head coach Chuck Long. After he was fired, it continued throughout Rocky Long’s tenure. Today, it is one of the premier camps on the west coast, with high school teams from Utah, Nevada, Arizona, and Northern California joining local San Diego programs as participants at the sold-out events.

Each weekend 36 teams will arrive on the Mesa looking to build chemistry and momentum for their upcoming seasons. The first day of the competition in pool play with 12 teams playing at the three practice fields behind the Fowler Athletic Center during three different time periods throughout the day. Pena and his staff work to accommodate any scheduling preference a school might have. Often, he explained, out-of-town teams request to play in the morning so they can enjoy San Diego for the rest of their day.

The results of day one dictate a team’s placement in the double-elimination tournament on day two. Each team is guaranteed five games, first-hand coaching from SDSU’s staff throughout, and a memorable experience with their teammates.

San Diego State also will be partnering with other universities during the events.

“We send out mass invitations to schools in the Pac-12, Big12, Big Sky, Pioneer League. They are welcome to come and evaluate recruits. … We, at San Diego State University, bring a unique opportunity to allow 36 teams to come to campus and feel the college experience and get the work in.”

10-12 colleges from the western part of the US will come to SDSU to evaluate the players at the camp. Universities from the PAC-12 that will be in attendance are Utah, Cal-Berkeley, Washington, Washington State, Oregon State, Colorado, and Arizona State.  Some other programs that will be there are Sacramento State, Eastern Washington University, USD,  and Cal Poly.  Coaches from these colleges are offered the opportunity to participate in the camps, but most attend in a purely evaluative capacity.

Returning the favor, San Diego State coaches will spend their summers going to other skill camps hosted by various universities. On June 3rd, SDSU coaches attended camps at Redlands and SMU. From June 4th to 5th, they attended TCU’s camp. Coming up, on  June 15th to June 16th, some Aztec coaches are going to Sacramento State’s camp, while others will be in attendance at events put on by Utah and Cal Poly that same week.

The student-athletes in attendance at SDSU’s camp will learn firsthand from Aztec coaches and players.  It will be very informative for these high school players to know what they need to do to get to the next level. “We are really excited to invite all these teams and individuals. It’s been two very long years,” Pena explained. 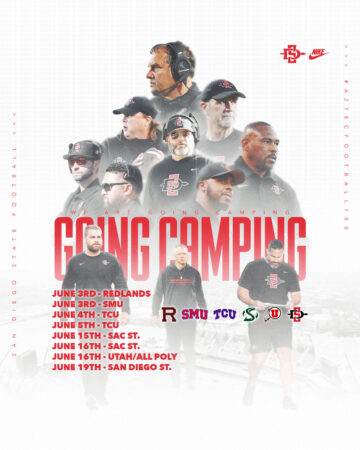 There are two phases during next weekend’s camp, one phase is an individual skills competition, and the other is another passing camp.  San Diego State players will also be involved during the events, primarily when the skills competition is going on.

“It will give the (SDSU) players the opportunity to lead the high school student-athletes through drills they do day in and day out,” Pena mentioned when asked how current San Diego State Football players will be involved.

SDSU Football is excited to be hosting their camps once again this summer. It is the last sign that everything is returning to normal on the Mesa.