After the massive trades for Blake Snell and Yu Darvish, the only question mark with the Padres’ rotation was in the five spot. Previously, prospects MacKenzie Gore, Adrian Morejón, and Ryan Weathers were likely to get their chance at the spot. Musgrove and Chris Paddack will now be clear fits for the four and five spots in the rotation.

Looking at the package they sent away, it’s easy to think the Padres overpaid for a guy with two years of control left. There is a lot of evidence, however, that the Padres didn’t.

His fastball sits at 92.6 mph, and he uses it 27 percent of the time. While it’s the pitch he uses the most, it’s one of his least effective pitches. In 2020 batters had a .324 average and .676 slugging percentage against his fastball. The one saving grace is the 26-degree launch angle that batters have against it. As you look into his arsenal, you will see how his pitch mix keeps batters from putting a consistent swing on the ball.

His slider is his go-to pitch to fool batters. It sits at 82.5 mph, and he uses it 24.2 percent of the time. What makes this pitch so special is the 50.6 percent whiff rate, and 32.6 put away percentage. To put that in perspective, Dinelson Lamet had a 47.4 percent whiff rate and a 33.5 put away percentage on his slider. Lamet’s slider was the single most valuable pitch in 2020, according to Fangraphs pitch value.

His next pitch is his curveball, which arguably is more deadly than the slider. He throws it 19.9 percent of the time and at 80.9 mph. Batters had a .050 batting average and .050 slugging percent. That is just one hit out of the 134 times he threw it in 2020. This pitch really gets batters off balance and produced a negative-five-degree launch angle. Like what was mentioned with the fastball, these low launch angles will keep batters off balance.

A very quick look at your new CB and SL, Padres fans. pic.twitter.com/xvdxz67Qpy

He features his sinker 11.9 percent of the time and throws it at 92 mph. It produces an xwOBA of .294. XwOBA is a stat that considers advanced statistics like exit velocity, launch angle, sprint speed and takes defense out of the equation. To reference the stat, Hunter Renfroe had a .293 wxOBA and ranked 190th among batters in 2020.

Coming in at 5th in usage is his changeup at 10.7 percent, and it is his third-fastest pitch at 86.5 mph. One very notable thing is how he mostly uses it against left-handed batters. Out of the 72 times he threw it in 2020, Musgrove only used it three times against righties. This stat also holds in 2019, in which he threw it 41 times to righties and 239 times to lefties.

In 2020, Musgrove recorded a 3.82 ERA, 3.23 xERA, 3.42 FIP, and 3.19x FIP in 39.2 innings. FIP is a pitching metric that takes the team’s defense out of the equation. In short, it looks at strikeouts, walks, and home runs– then puts it on an ERA like scale. Typically, when a player’s FIP is lower than their ERA, it means their ERA is likely to improve next season. Both his real and expected numbers fit that mold.

Another reason Padre fans should be excited is how much he lit up the baseball savant leaderboards. He finished in the top 85 percentile or higher in exit velocity, xBA, xSLG, and K percentage. It’s no wonder why his K/9 shot up from 8.3 in 2019 to 12.48 in 2020. His pitches produce more spin than ever, thus making them more deceptive. The higher spin rates means that these expected analytics are here to stay. 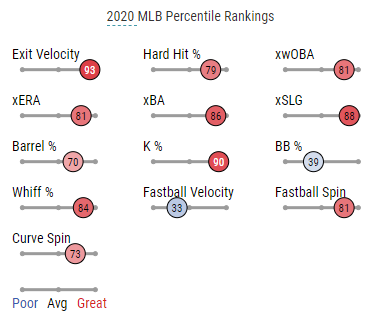 As a whole, Musgrove will be a good pitcher for his role. He still has room to improve, and the Padres potentially have some tweaks to make him great. At the number four or five spot, it gives the Padres a super-stacked rotation. The rotation is Snell, Darvish, Lamet, Musgrove, and Paddack, which should be scary to other teams.

Evan is a student finishing up a degree in Finance from Northern Arizona University. The ability to break down numbers and find the story behind them has lead to his first of writing for East Village times. He covers baseball which is the sport he grew up playing and has followed even after his playing years.
Tags: Joe Musgrove, San Diego Padres

SDSU Aztecs 3 Keys to Victory against the Towson Tigers