Technology continues to advance in baseball with a more advanced statistics being used. Data influences decisions made on and off the field of play. Whether it is a manager applying a defensive shift on a pull hitter or a general manager looking for a trade to add more created runs.

At minor league parks, not all of these statistics are available, or at least not published. However, there are some advanced statistics made available from the website Fangraphs.

With Fangraphs’ help, I have downloaded the last five years of advanced batting statistics from the single-A level.  I then split the results into two datasets. The first being seven current MLB players who made it to the MLB.  The players used were: Fernando Tatis Jr. Wander Franco, Dylan Carlson, Gavin Lux, Christian Pache, Pavin Smith.

The second data set is the last five years of Padre organization batter statistics at the single-A level. I compared their advanced stats to the seven MLB player’s stats.

The goal was to create a threshold to find the next Padre star. The model showed three players that scored extremely well.

Unfortunately, two of the three are no longer with the organization due to a early retirement and a questionable trade.

An outfielder who was drafted in the fifth round (141st overall) by the San Diego Padres in 2018.  The question is: what could have been for Sutton?  Recently he was added to the voluntarily retired list according to Minor League Baseball.

During his career, Sutton put up outstanding numbers.

He posted an on-base percentage of around .400.  No other TinCap posted a higher OBP within the last five years.  Weighted runs created (wRC) is an advanced statistic that gives a value to each hit rather than treating them all the same.

This advanced statistic shows over the last five years, Sutton created the second-most runs on our dataset, only behind Fernando Tatis Jr.  Sutton began 2021 as a TinCap and was promoted in June to Double-A San Antonio Missions before retirement. 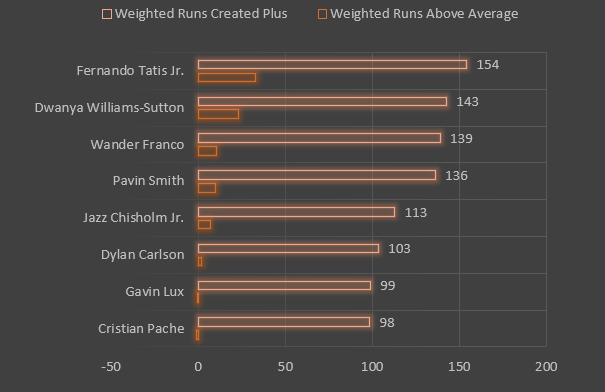 According to my model, the Padres traded away a prospect with extremely good advanced statistics. To validate my findings, he currently is on the Cleveland Guardians roster. He also has the highest batting average in the American League.

Miller was part of the trade that sent Mike Clevenger to the Padres. At the Single-A level, Miller only struck out 11% of the time while having a 62% BB/K % ratio.  He batted .395 with an OBP of ??? He had a higher Batting Average on Balls In Play (BABIP) than every player compared in my model. BABIP only takes in affect balls in play, not affected by the defense.

Drafted by the Padres as a shortstop, Miller was converted by the Guardians to a first baseman. With much talk about Eric Hosmer‘s future in San Diego, it is hard to wonder what could have been with Owen Miller? Hosmer signed an eight-year, $144 million contract with the Padres in 2018. 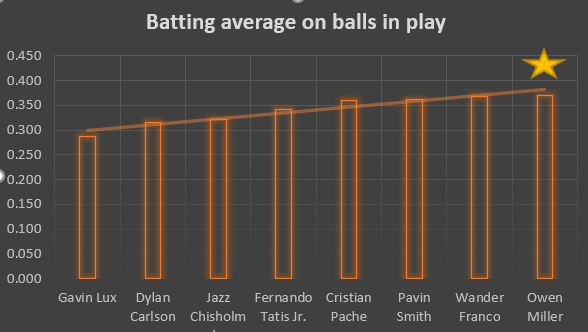 He came from Kansas City in 2017 via a trade that sent Brandon Maurer, Ryan Buchter, and RHP Trevor Cahill to Kansas City Royals for cash, 2B Esteury Ruiz, LHP Matt Strahm, and Travis Wood.

Ruiz is currently playing in double-A San Antonio as a utility player. So far in his career, the only positions he has not played are catcher, pitcher, and first base. Primarily batting leadoff for the Missions, Ruiz has a .379 average with a .561 on-base percentage so far in 2022.

Considering the fact that the Padres like to steal bases more than any other team in the MLB, a speedster like Ruiz could be a future asset.  Per Fangraphs, his speed score is higher than every player on my model.  A speed score is determined by stolen base, triples, & runs scored data. He also has the best weighted stolen base runs created than everyone on the dataset, and it’s not even a close 2nd place.  If the Padres make a playoff push having a guy like Ruiz being a utility man that steels bases could be beneficial. Even just to stash him on the bench for pinch-run opportunities. 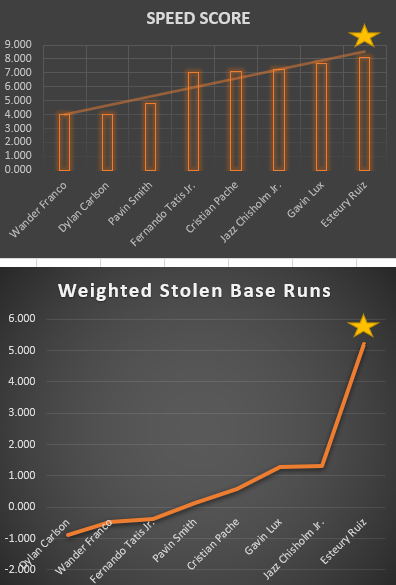 I was born, raised, and still reside in the Hoosier state. I am a 2008 graduate of Ivy Tech Community College. I am married to my beautiful wife Kristen, father to Garrett, with another child on the way. A baseball enthusiast covering the Fort Wayne TinCaps, High A affiliate of the San Diego Padres.
Tags: Esteury Ruiz, Owen Miller, Padres, San Diego Padres