The 2020 trade deadline is August 31, and the Padres have some work to do to boost their playoff chances.

The Padres’ bullpen is a problem. What looked impeccable on paper has been an ulcer-waiting-to-happen on the field. The bullpen ranks 25th in ERA (5.93) and 27th in fWAR (-0.4) with no signs of relief with Kirby Yates going down with an elbow issue, likely for the rest of the season.

The bullpen needs help, and it needs it fast. If the Padres do nothing at the deadline, they are banking on guys like Emilio Pagan (7.20 ERA) and Craig Stammen (5.91 ERA) to right the ship and pitch closer to the numbers that are reflected on Baseball-Reference.

Drew Pomeranz has been one of the lone bright spots, having not allowed an earned run through 10 appearances, including four saves. Cal Quantrill is the perfect “tweener” between reliever and starter, with a 3.00 ERA in nine innings and earned his first save of his career in Tuesday’s win in Texas.

Aside from those two, the Padres have serious problems that need to be addressed. The 2020 season is a weird one, and the trade deadline is in less than two weeks on August 31. The market for relievers is always hot, but this season, there are 16 playoff spots up for grabs, so many more teams feel like they are contenders than normal, perhaps providing a scarcity of available relievers.

Let’s explore some possible options, most of these arms are on teams who don’t look like contenders, with whom general manager A.J. Preller can phone and swing a deal. Many of these will not be splashy, long-term moves but more quick fixes to boost their playoff hopes for this season.

The Orioles currently are over .500 at 12-11 ahead of Wednesday’s slate of games. Most likely, they are fools gold with their +1 run differential and being ranked 20th in team ERA. If that turns out to be true, Givens will be heavily sought after. The 30-year-old offers one more year of control after 2020 and has been a solid reliever for multiple years in Baltimore. In 293 games over six seasons with the Orioles, he has posted a 3.31 ERA and 132 ERA+. 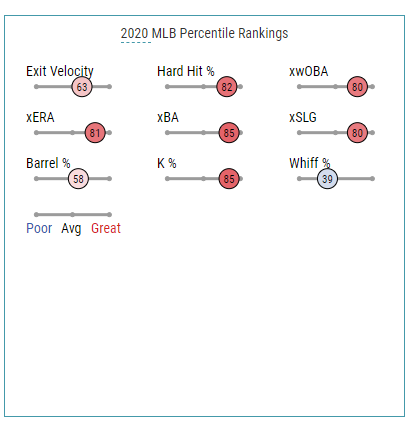 He offers a right-handed option with a nasty mid-90s fastball and slider mix who induces weak contact.  This season, he seems to be on another level, appearing in nine games without allowing a single earned run with a pace of 13 strikeouts-per-nine innings. He would provide a good compliment to the southpaw Pomeranz in the back end of the bullpen to try and patch up the late-game strategy with the significant loss of Yates. Given his history of production and control beyond 2020 with Baltimore amid a fierce rebuild, he will not come cheap.

Sticking the AL East, the Red Sox have been extremely disappointing. Clearly, this is not their year after losing Chris Sale to Tommy John surgery and trading Mookie Betts to the Dodgers. Workman offers a cheaper, not as stellar option as Givens. He is coming off of the best season of his career in 2019, with a 1.88 ERA, 256 ERA+, and 16 saves in 73 games for Boston. This year, he has not been as effective but would be one of the more steady arms in the Padres’ imploding bullpen.

In six games this year, Workman possesses a 4.76 ERA, but his 2.79 FIP suggests a lot of it is due to poor luck pitching for a bad team. He uses a nasty curve and cutter combo that baffles righties especially, who have a .224 batting average against Workman during his six-year career. The 32-year-old would not require the same package as Givens but would give San Diego a steady arm in the middle of the bullpen to at least bridge the gap between Padres starters and Pomeranz.

Easily the most recognizable name thus far on the list, Holland comes with three All-Star appearances and a Mariano Rivera Reliever of the Year Award. Since leaving the Royals the first time after 2015, he floundered a bit, with a 4.20 ERA with four different teams since 2017 before returning to the Royals ahead of this season. He seems to have found himself again at 34 years old, with a 3.09 ERA and 153 ERA+ in 11 games along with a barrels allowed percentage in the 85th percentile.

Obviously, there is a risk with Holland, as he is an aging arm with a recent history of regression. However, his veteran presence would be welcome in this young bullpen with his 207 career saves in 10 seasons, and he would be just a rental, set to be a free agent at the end of the year. Thus, he would not demand a very high price.

Another arm in Kansas City that can be of service is Rosenthal, a former All-Star himself, with the St. Louis Cardinals. Between 2014 and 2015, he collected 93 saves, among the best in baseball. Like Holland, Rosenthal will be a rental for the remainder of the season and nothing more. This year, he has a stifling 0.90 ERA through 10 games, including five saves. If the Padres are shopping for a proven closer who is not too far past his prime to offer a band-aid from the Yates injury, Rosenthal may be the guy.

There is a risk, however. In 2020, he was reunited with his former manager with the Cardinals in Mike Matheny. He is yet to find success without Matheny’s tutelage, with a ballooned 13.50 ERA in 22 games between the Nationals and Tigers in 2019. But if the Padres feel confident they can get the best out of Rosenthal, they should pull the trigger on him being a late-game option.

Old friend alert. Boxberger has accomplished a lot since departing from the Padres as a 25-year-old in 2013, including notching 41 saves for the Rays in 2015, garnering an All-Star selection. He put together another 30-plus save season in 2018 with the Diamondbacks. Now with the Miami Marlins, Boxberger owns a solid 2.70 ERA in eight games. Like most on this list, he would be a rental for the remaining of the 2020 season, thus coming cheaper than other options.

Now 32 years old, the southern California native has put together a respectable career, including three seasons of at least 60 appearances. In six of his nine years, he has an ERA+ better than 100.

The Padres and Giants do not make very many deals, only pulling the trigger on three trades since 1987, so pencil this in as “possible but not likely.” Watson offers his services from the left side, the only one on this list. At 35 years old, he has put together an admirable career with an All-Star appearance in 2014 with the Pirates. He arrived in San Francisco ahead of the 2018 season and, in parts of three seasons, owns a 3.20 ERA and 127 ERA+, numbers that would absolutely bolster the Padres ‘pen.

In eight games so far in 2020, he has allowed one earned run and one walk. Once again, he would be a rental for this year without a commitment beyond 2020. He is not a high strikeout arm, but he gets the job done with inducing soft contact, with his 23.3 percent soft contact rate, 16th-best among relievers since 2019. Pairing him with another lefty in Pomeranz would make it much more challenging for left-handed power bats late in games against the Padres.

Native of Escondido, CA. Lived in San Diego area for 20 years. Padres fan since childhood (mid-90s). I have been writing since 2014. I currently live near Seattle, WA and am married to a Seattle sports girl. I wore #19 on my high school baseball team for Tony Gwynn. I am a stats and sports history nerd. I attended BYU on the Idaho campus. I also love Star Wars.
Tags: Brad Boxberger, Brandon Workman, Drew Pomeranz, Greg Holland, Padres, San Diego Padres, Trevor Rosenthal

Padres Down on the Farm: June 24 (Lawson pitches well as SA clinches playoff spot/Campusano 3 hits for EP/Hassell 3 hits for FW)

Gore and Nola guide Padres to scrappy win over Phillies

Padres Down on the Farm: June 23 (Milone 3-run HR for EP/Hassell 3 hits for FW/Merril 3 hits for ACL)

Let’s not give up too much to shore up a bullpen that had Pomeranz added to the IL (10 days). Unfortunately, too many teams need relief pitching so the prices will be elevated. There were a couple of pitchers on the Rangers that looked pretty good too. I’d think they would make them available.

I’ve not looked at what we have available in our own lower level. Surely there must be something. Are we expecting anyone back from the IL from earlier in spring training?

Padres Down on the Farm: June 24 (Lawson pitches well as SA clinches playoff spot/Campusano 3 hits for EP/Hassell 3 hits for FW)

Gore and Nola guide Padres to scrappy win over Phillies

Adam Seiko and Uganda take on the world