In the midst of a system filled with starting pitching prospects, left-handed starter Jerry Keel is quietly having one of the more productive seasons in the Padres’ minor league system.

Keel, drafted out of Cal State Northridge in the 9th round (267th pick) in 2015, started the 2017 season out in Fort Wayne with the TinCaps.

In 48 2/3 innings in Fort Wayne, he only walked 14 batters while striking out 50. He also dodged the HR ball, giving up only 0.7/9 innings. His final start as a TinCap saw him strike out 11 batters, while only giving up two hits, in seven shutout innings.

On May 26th, Keel made a two-level jump to Double-A San Antonio, bypassing Lake Elsinore (where he did make four starts in 2016). Thus far, the jump to San Antonio has been a success. In 17.2 IP, Keel has only given up two runs and has yet to allow a home run en route to a 1.02 ERA & 2.81 FIP. His AVG against, WHIP, and BABIP (left to right) haven’t moved a bit despite his promotion:

The 6′ 6″ Keel has also flat-out dominated lefties this season. In Fort Wayne, lefties only hit .123 against him. In San Antonio, lefties are currently hitting .143 against him. He has faced 81 lefties this year between FW and SA, and has struck out 39 of them, while only walking one batter. 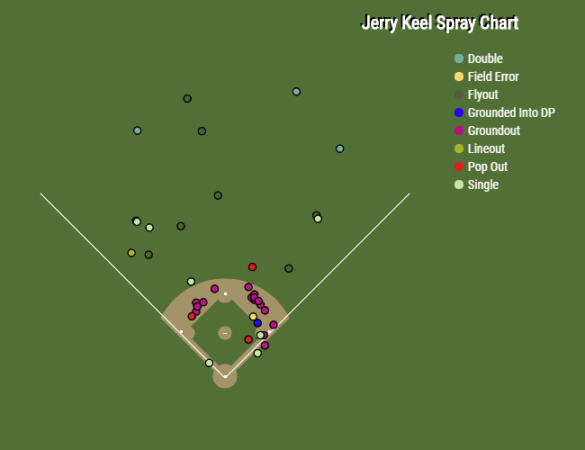 The 23-year-old Keel, out of Palmdale, CA, will not turn 24 until September, and may very well be on his way to being a breakout prospect in the Padres’ organization. I had the great opportunity to send a few questions his way about his own draft experience, how his season is going so far, and about the relationships he has built with-in the Padres’ system:

Q: Talk about the draft/signing process with the Padres back in 2015. You were drafted in the 9th round. Did you have an idea that the Padres were interested (in drafting you)?

A: “Yes I did, a couple of weeks before (the draft), I was invited to their pre-draft workout. Unfortunately, I already had a commitment to throw in another team’s workout that was on the same day. I told the scout about the situation and they understood. Then, on the 2nd day of the draft, they called in the 5th or 6th round & said they would take me in the 9th round. A few other teams also had the same idea… and actually I told the Cubs (who were picking two picks before the Padres in the 9th round) that if they couldn’t match the money that the Padres and Mets were planning on giving me, that they should pass on me; which they did. The Padres took me two picks later.”

Q: You spent most of your time in Fort Wayne, before being called up in the second half for a brief stints with the Storm (High Single-A) and Missions (Double-A). Did those stints last year prepare you better for your recent two-level jump? If so, how?

A: “Yes they did. It (the promotions) just gave me a glimpse of how batters approach you differently at high levels and how you have to execute/keep them off-balance with your pitches. It also has allowed me to be more relaxed and confident this year compared to last, when it sped up on me making those jumps so quickly.”

Q: You recently faced Springfield (Cardinals Double-A affiliate) twice within the matter of six days. Does your plan of attack differ from game to game when you have to face the same team twice in a short time period?

A: “It just depends on how you attack a team and the results you get from that first game. We have a plan of attack that we go over in our pitchers meeting, and we stick with that/adjust to what we see mid game. For me, I had good success during my first outing; so not much changed in my second outing in terms of how to go after them.”

Q: In Fort Wayne, lefties only hit .123 off of you. How do you go about attacking a left-handed hitter as opposed to a right-handed hitter?

A: “For me, I think my height and arm angle makes lefties uncomfortable. The ball comes out almost behind them with a downward plane because of my height (6′ 6″), and you can combine that with my slider that they seem to struggle with. Right-handed hitters get to see it (the ball) better and track it in a little longer than a lefty.”

Q: What was it like being one of the older player on the Fort Wayne roster during your time there? Did younger players come to you for advice?

A: “It was an unusual experience for me. I’m used to being a younger guy or in the middle, but it was cool to be a guy that the younger players (that were going through their first full season) could go to.”

Q: Do you like the Texas league (and N.L.) format of having to hit? Or would you prefer all of baseball follow the designated hitter (DH) format?

A: ” I love that we get to hit in the N.L. Starting (to hit) in Double-A brings back memories of how baseball was growing up, being able to help yourself out on offense as well as always pitching.”

Jerry Keel is definitely a player to watch in the organization. It will be a lot of fun to continue to track his progress throughout the system as he continues to get closer and closer to the big leagues.

I would just like to send a thank you to Jerry Keel for taking the time to answer some of my questions, as it is very much appreciated.

Thank you for the article. The kid has talent and I look forward to seeing him develop.

Thanks for doing this interview. Keel seems like one of the hidden gems in the Padres farm system. I was curious about learning more about him, and your article answered a lot of questions.