Miguel Diaz is a pitcher with impressive stuff, yet less-than-stellar control over where his pitches end up. Here’s a closer look at the right-handed pitcher’s profile:

Following his selection as a Rule 5 draft pick prior to the 2017 season, Miguel Diaz spent the entirety of that same season in the big leagues with the Padres.

The team was clearly enticed by his quality of pitches, and he flashed impressive pitching ability at times. It was also obvious to the team, given his FIP of 7.02, that he would require more minor league seasoning in 2018. He began the year at Double-A San Antonio and worked his way to Triple-A before pitching in eleven games for the Padres this past season.

This is where Diaz’s aforementioned power stuff comes into play, as he induced swing-and-misses with markedly more success, compared with the average major league hurler. Hitters whiffed on 36.3% of pitches they swung at against Diaz; the average whiff rate induced by MLB pitchers is 24.9%.

Although it was in a short sample of 18.2 innings at the major league level, Diaz’s ability to strike hitters out was very noticeable in 2018. He recorded an impressive 14.46 K/9 ratio — Diaz struck out 30 of the 85 hitters he faced in the big leagues this year. Take a look at the red dots in the chart below, as they’re the ones that opponents of Diaz whiffed on. He induced numerous whiffs on pitches thrown high in the strike zone, courtesy of Statcast: 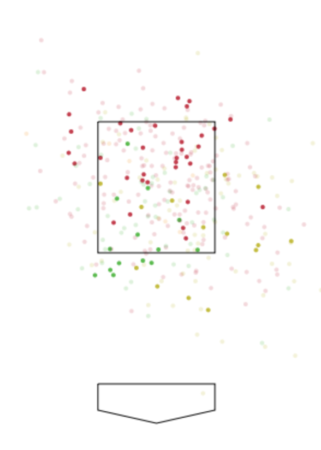 While it may be easy to write off his 2018 major league work as mediocre because of his 4.82 ERA, Diaz posted a FIP of only 3.27 — showing that he pitched better than his ERA indicates. Going back to the chart above, where high pitches induced many whiffs for Diaz, they also help explain how he’s a fly ball pitcher. 62.8% of balls in play against Diaz were either fly balls or line drives, according to Statcast. Not to worry about home runs, though — Diaz only gave up two home runs with the Padres in 2018. Furthermore, the batted ball profile of his opponents does not suggest that he’ll struggle with batted ball luck in the future. Only 5% of balls hit against him were barrels, which rates better than the league average rate of 7%. We should look for his ERA to decrease in 2019, based on what the aforementioned data has told us.

Continuing with the theme of Diaz’s rather disappointing control over his pitches, it was clear last season that he could have better commanded his pitches. This is the underlying issue with his profile as a whole — Diaz has stuff that can clearly generate whiffs, but his control has always held him back. Even when Diaz was throwing strikes during his 2018 stint with the Padres towards the end of the season, the placement of those pitches was inconsistent. Here’s a Statcast chart on his pitch locations during 2018, illustrating his erratic command: 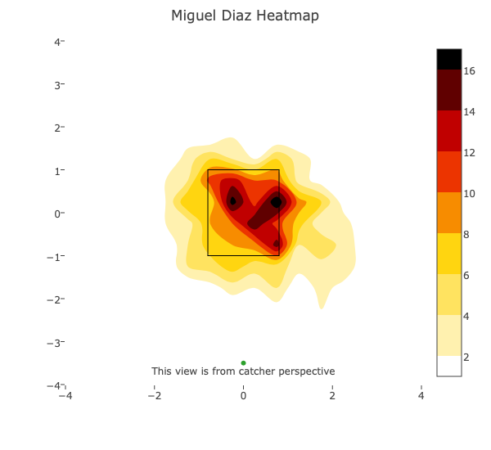 As we talked about above, Diaz has shown remarkable abilities as a pitcher at the major league level at times during his tenure with the Padres. He’s also been very frustrating, especially with regard to the number of walks that he’s issued over the last two seasons. He’s a volatile pitcher in the sense that he strikes out a significant number of hitters, yet he also allows too many of them to get on base.

The positive thing to remember in the case of a player such as Diaz is that the Padres are still in a rebuilding phase at this point in time. There will be plenty of opportunity for him to at least pitch out of the bullpen for the team, if not in the rotation during the upcoming 2019 season. The fact that the Padres have not acquired any new starting pitchers this offseason, speaks to the opportunity Diaz will likely have with the team. His future is most likely going to be in the bullpen moving forward, but he’ll probably get a chance to start some games next season for the Padres. He’s a classic high-risk, high-reward kind of pitcher whom the Padres will continue to try and develop in coming seasons.

A sophomore at Willamette University in Oregon, Conrad is majoring in Spanish but is also a writing center assistant for other students at Willamette. He has been a Padres die-hard his whole life and hopes to bring comprehensible statistical analysis to the site.
Tags: Miguel Diaz, Miguel Diaz Padres, Padres 2019, Padres PNO, San Diego Padres, San Diego Padres Diaz