The San Diego Padres had a young outfield in 2017.

Manuel Margot, Franchy Cordero, and Hunter Renfroe all were rookies, and all spent time on the field and in the lineup as Friar youngsters. Travis Jankowski and Jose Pirela, also young players, saw time on the field.

One of those rookies, Renfroe, was a mixed bag this season. The right fielder showed off his power, belting 26 home runs. He passed Nate Colbert to set a new rookie home run record for the franchise. Colbert hit 23 in 1969.

Renfroe was taken in the first round of the 2013 MLB First Year Player Draft. He was ranked as one of the better prospects in the Padres’ farm system before being called up.

However, it’s hard to think of Renfroe as a long-time solution in right field based on his performance. This was only his first full season in the majors. Along with having room for improvement, he has time. The only question is, how much time will the Padres give him?

Renfroe has a cannon for an arm. He showed it at different points during the season. Probably the best example of just how hard he can throw a ball was seen during a game on May 29 against the Chicago Cubs.

With runners at first and third and one out, Kyle Schwarber hit a ball to right field. Renfroe made the catch, then threw home. The ball made it to Austin Hedges’ glove fast enough to keep Addison Russell at third base.

The throw was measured at 101.6 mph, and was the fastest throw measured by statcast at that point in the season.

He did this once before, on May 16 against the Milwaukee Brewers. With runners at first and third and one out, Renfroe caught a line drive hit by Keon Broxton. Renfroe made the catch and threw a 98.4 mph rocket to home. The throw made it home in time for Hedges to apply a tag on Eric Sogard, completing the double play.

According to Statcast, it was the second-hardest throw on an outfield assist when it happened, behind Bryce Harper (99.7 mph).

Renfroe became the rookie home run leader on Sep. 20, when he hit his 24th home run. It was the third home run in a three-homer game.

He had 103 hits this season, and a majority of them went for extra bases. He had 26 home runs, 25 doubles, and a triple. 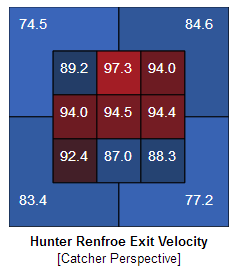 When Renfroe can get around on one, there’s a good chance it’s gonna go far. The only problem with that is…..

Renfroe has to first make contact with the ball if he wants to watch it fly. As obvious as that sounds, it’s something he struggled with in 2017. He posted a .275 BABIP during the season, meaning that he can record a hit when he gets the bat on the ball. Unfortunately, he doesn’t make enough contact. Too many swings and misses. He struck out 140 times.

A reason for his lack of contact is his lack of patience at the plate. On the season, Renfroe averaged only 3.87 pitches per plate appearance. On top of that, he only had 27 walks. His strikeout-to-walk ration was an ugly 5.19:1.

The Padres were so worried about Renfroe’s approach that they sent him down to Triple-A El Paso on Aug. 22. He had hit 20 home runs, but that wasn’t enough to compensate for his lack of production in other offensive categories. He had only walked nine times between the end of May and the day he was sent down. He hadn’t drawn any walks during the entire month of July.

Renfroe was simply awful in right field for the Padres in 2017. He led National League right fielders with nine errors. That’s not the stat category anyone wants to lead. Before being sent down, his UZR was at -10. It rose to -5.7 before the season ended. Perhaps the time spent at Triple-A El Paso helped him improve his defense along with his offense. Only time will tell. He can still benefit from improving his range in right, especially in a spacious outfield like at Petco.

Renfroe returned to hitting home runs when he was called back up. He hit four in his first three games in September, and had six overall after being recalled. Unfortunately, hitting home runs won’t be enough to keep him in the starting lineup.

The numbers Renfroe has put up on both offense and defense aren’t what any team could expect from a player drafted in the first round. Perhaps, sending him down to Triple A-El Paso sent a strong message. Hopefully, that message is that 2018 will be a make-or-break season for Renfroe. This team is going to keep making strides next season, and beyond, towards becoming a serious contender. If Renfroe doesn’t play like the player the Padres expect him to be, he just might be replaced when this team decides it’s time to make a run at the postseason.