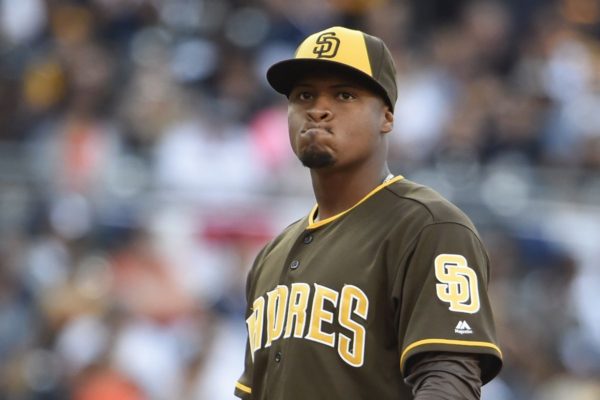 The El Paso Chihuahuas (22-23) opened up their road trip by heading to the Pacific Northwest to take on the Tacoma Rainiers (23-22) of the PCL Pacific Northern division.

It was a beautiful, clear evening in Tacoma and the stadium was half-full for a Monday game.

Of course, Cheney Stadium had to play the “Chihuahua Song” from the movie Beverly Hills Chihuahua as El Paso’s lineup was read.

Luis Perdomo made his sixth start for El Paso on Monday night against the Tacoma Rainiers.

The game started slowly for both offenses as Perdomo and Rainiers starter Christian Bergman flew through the first three-plus innings.

The Chihuahuas struck first on a Shane Peterson two-run home run. The Rainiers responded in the fifth; after a Luis Urias error got a man aboard, Chris Herrmann launched a two-run, game-tying homer in what was Perdomo’s lone mistake of the night.

Perdomo worked through some trouble in the sixth, but then he got a pop-up with the bases loaded and two outs. He came out for the seventh inning and got the first two outs, but after two infield hits, he was removed from the game. Trey Wingenter got the last out.

Perdomo finished with 6 2/3 innings, five hits, one earned run, two walks, and five strikeouts, and drops his ERA to 2.81 on the season.

In the top of the eight inning, Luis Urias launched a home run to the opposite field, scoring Auston Bousfield in the process, giving El Paso a 4-2 lead. That took the energy right out of the ballpark. That was Urias’ fourth homer of the season. He is one away from his minor league career-high of five, set in Lake Elsinore in 2016. He seems to be showing a lot more pop lately, which apparently is the only soft spot in his strong armor.

The Chihuahuas bullpen locked it down after Urias’ clutch homer as Wingenter got another two outs and Jose Castillo got a four-out save, striking out two. The Rainiers only mustered six hits and two runs off of the El Paso pitching staff, which was not in many jams Monday night.

In his rehab debut, Austin Hedges seemed to lack timing as he went 0-3 with a strikeout, but he did walk and score a run. He also nailed a runner trying to steal in vintage Hedges fashion.

Native of Escondido, CA. Lived in San Diego area for 20 years. Padres fan since childhood (mid-90s). I have been writing since 2014. I currently live near Seattle, WA and am married to a Seattle sports girl. I wore #19 on my high school baseball team for Tony Gwynn. I am a stats and sports history nerd. I attended BYU on the Idaho campus. I also love Star Wars.
Tags: Austin Hedges, El Paso Chihuahuas vs Tacoma Rainiers, Luis Perdomo, Luis Urias, MiLB, MLB, Padres