Hometown heroes Jesse Matthews and JR Justice arrived on the Mesa the same year, 2018. Matthews came into the program with no-stars and without a scholarship. Justice was the star recruit of the 2018 class. However, in the eyes of the coaches, none of this mattered.

Unlike most programs, SDSU treats every player on their roster the same. Production is what counts. It was this fairness that first attracted Segun Olubi to the program.

By now, Olubi’s story is well-known. Facing daunting odds, he worked his way on campus after stints at schools across the country. When he first made his presence known on the field, it was a surprise to everyone. Olubi was not mentioned leading up to the 2020 season, his bio on the team’s website was bare, yet he played in a deep and talented linebacking group earning a scholarship for his efforts.

Just before the 2021 season, the Aztecs walked into the team meeting room. Every senior’s name was written on the board. Each player, except freshmen, and every coach was given a ballot to vote for two offensive and two defensive players.  When the results were tallied, Olubi and Trenton Thompson tied.

At the time of the vote, Thompson had been part of the program since 2016 and played in 43 games in his Aztec career. For Olubi to rise to Thompson’s stature in the eyes of his teammates in only one season was nothing short of amazing.

Following a successful 2021, Olubi finds himself back at square one, trying to find his next team. This latest hurdle in his football race is the most daunting yet. He must convince a team to give him a chance to play in the NFL. Unlike some of his teammates whose selection in the draft is assured, Olubi is fighting to gain the attention of NFL decision makers.

As a guest on the second episode of The SDSU Football Podcast, Olubi touched on a wide range of topics including his process leading up to the draft. Olubi has numerous strengths and a few things working against him as he tries to carve out a place for himself in the league. 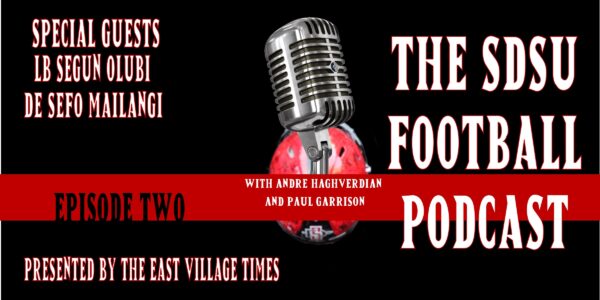 Watching Olubi play, the first thing that jumps out is how fast he is. It was his top-end speed on a 71-yard interception return for a touchdown in 2020 against Hawaii that demonstratively placed him on NFL radars. His best hope of getting selected in the draft lies with a team that values speed throughout the roster.

Segun Olubi's first career interception is one he won't forget. He takes it to the house and the Aztecs are up 28-0. pic.twitter.com/v0KCiwBRHc

“I’m very versatile,” Olubi said when asked where he will play in the NFL. “Basically, every team that is coming to me, that I am hearing about is liking me at linebacker. It’s mainly that I can bring elite speed to that position, bring explosiveness to that position. I can match up well with backs, tight ends, things like that.”

Modern football is a game of mismatches. Olubi is a mismatch eraser. He is physical enough to support in the run game while fast enough to cover space in the passing game. Explosive enough to rush the quarterback in blitz packages, Olubi’s history before SDSU was at the safety position. That experience should serve him well at the next level.

Olubi also is a terrific special teams player. During the 2020 season, Olubi was arguably the best player on the Aztecs punt team, regularly the first player down the field on punt defense. He should be able to step in and contribute at a high level on multiple special teams units on day one.

As adept at talking about economic indicators as he is the intricacies of the 3-3-5 defense, Olubi’s intelligence will be an asset to whatever team he is on better. On a practice squad, he would fully understand what opponents are doing to give his team a truer look. With time, he could call the defense and make sure everyone is set up properly.  Finally, his intelligence matter because he understands how to be a great teammate intuitively and academically. That knowledge will make the chemistry better in any locker room that he hangs his helmet in.

The difference in professional sports between winning and losing is usually minuscule. Slight, nearly unnoticeable levels of effort often decide the outcome of a game. As sophisticated as NFL teams are, they have yet to discover a method to test a player’s love for football. The positive of Olubi’s story is it makes one point clear: he is passionate about the game.

Throughout his journey, there were many opportunities to quit. Drive and determination only take one so far. To work like Olubi has and excel on the field at every level, there is an unseen love. NFL teams will not have to worry about his commitment to getting better.

People follow Olubi. They gravitate to him. As already mentioned above, in only one year, the coaches and players in the program voted him Team Captain. His rapport with his teammates was evident during practices, warmups, and the games. In the Aztecs opening game against New Mexico State, Olubi was doubly honored by the team.

With all due respect to Cam Thomas, Devin Lloyd, and Tayler Hawkins, Olubi was the best defender on the field when the Aztecs and Utes played. He finished with eight tackles, a tackle for a loss, and three quarterback hurries. Olubi was fast, physical, and a menace to Utah throughout.

While too much emphasis is given to playing Power Five teams, it is important to evaluators. Against the top talent on SDSU’s schedule, Olubi produced.

Good but not great production

Aside from Olubi’s 10 quarterback hurries, none of his numbers jump out. He was very good at SDSU, but did not distinguish himself among a very good linebacking unit. The game Olubi is playing now is trying to get noticed. There are thousands of players NFL teams evaluate, and the door to getting noticed can be statistics. 53 tackles, 3.5 tackles for loss, and 2 sacks does not jump off the page.

Olubi’s amazing story rising from walk-on to Team Captain cuts both ways. Why was he in that position to begin with? Once NFL teams speak with Olubi, any questions will be alleviated. The question is if his uncommon path will prevent those conversations from happening.

“If anybody wants to talk to me, I’m going to tell them,” Olubi said. “I am going to be honest. I have nothing really to hide. I’ve had an interesting, unique story, but nothing too crazy.” 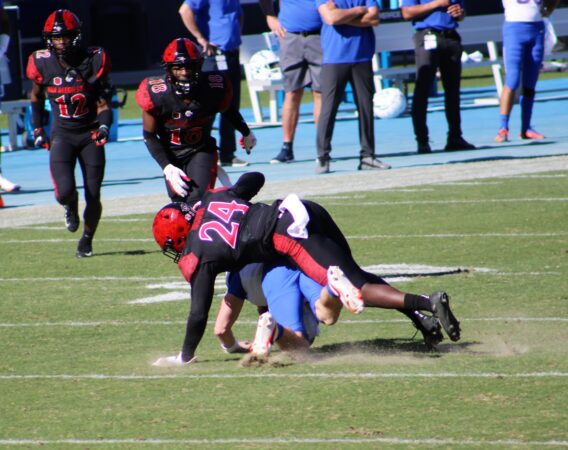 Opportunity to be seen

“Right now, we are hoping, crossing our fingers, hoping to get one of those big bowl invites,” Olubi said. “One of those nice all-star games. Right now, I’m just Combine training, hoping to (impress) people with my Combine numbers. I’m real focused and locked in on that. I’m controlling what I can control.”

Tayler Hawkins played in the Hula Bowl, while Daniel Bellinger and Cam Thomas will play in the Senior Bowl, and Zach Thomas will compete in the East West Shrine Bowl. Olubi’s immense strengths are evident when he is playing. Without an All-Star showcase, it puts a lot of pressure on SDSU’s Pro Day and his workouts with teams.

The flip side of Olubi’s versatility is that he has no clear position in the NFL. He is too big to play DB, and will need to prove stout enough to play LB. Throughout college football, unconventional players thrive, but in the NFL those same people have an uphill battle trying to prove they belong.

Segun Olubi’s legacy at SDSU is secure. His dramatic story and stellar play give him an outside chance of one day walking on the field of Snapdragon Stadium at halftime as a member of the Aztec Hall of Fame. A successful NFL career would certainly help the odds of his enshrinement.

With top-end speed, playing multiple phases, Olubi will get an opportunity to prove his value on the field. Off the field, the NFL team that brings Olubi in will be getting a person of tremendous character, who will make their locker room better.

As Olubi transitions to this next chapter in his football journey, he has a long track record of excelling as an underdog. He will need to leverage all he has learned, and with a little luck have a very long and productive professional career.

My earliest sport's memory involve tailgating at the Murph, running down the circular exit ramps, and seeing the Padres, Chargers and Aztecs play. As a second generation Aztec, I am passionate about all things SDSU. Other interests include raising my four children, being a great husband and teaching high school.
Tags: College Football Podcast, NFL Draft, San Diego State Aztecs Football, Segun Olubi

Bell finally has his Chance to shine

SDSU’s Michael Shawcroft playing for his city, in his city