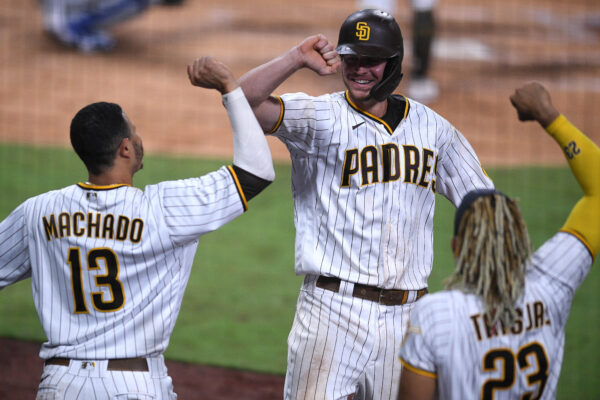 Wil Myers recorded a bounce-back campaign for the Padres in the shortened 2020 schedule. Can he do it over a 162-game schedule in 2021?

Since the day he landed in San Diego more than six years ago, Wil Myers has been a controversial player. As part of a three-way trade, the Padres’ new general manager A.J. Preller sent shortstop Trea Turner and pitcher Joe Ross, among others, to the Washington Nationals in exchange for Myers.

By the 2016 season, Turner had emerged as a potential star and taken second place in the National League Rookie of the Year voting. Overall, Turner has a .296/.353/.480 batting line and 115 OPS+.  He can play short, center, and second.

Myers also played well his first year in San Diego.  He batted .259/.336/.461/.797 with 28 stolen bases, 29 doubles, four triples, 28 home runs, and 94 RBI in 157 games.  In January 2017, the Padres and Myers agreed to a six-year extension worth $83 million, the most lucrative contract in franchise history at the time. However, in 2018 the Padres signed Eric Hosmer to a $144 million contract and a year later offered Manny Machado the heftiest contract– 10-year, $300 million — in sports history in the United States at the time.  By comparison, Myers’ contract looked like pocket change.

According to just about every defensive metric, Myers’ optimal position would be first base; however, the addition of Hosmer left Myers in limbo. He’s moved around the diamond, playing all outfield positions as well as first and third with decidedly mixed results.

Through all these changes, the Will Myers name has been a constant in trade rumors. In the offseason last year, he featured prominently in talks between the Boston Red Sox and the Padres involving Mookie Betts.  Of course, Betts ended up with the World Series Champion Los Angeles Dodgers.

Myers, who took home the Rookie of the Year award for the American League in  2013 during his time with the Tampa Bay Rays, has a desirable blend of speed and power. Last year he had one of his best seasons at the plate, batting .288/.353/.606/.959 with 15 homers, 14 doubles, and two triples in 218 plate appearances.

First-year manager Jayce Tingler, known for his ability to communicate with players, had to be a welcome change for Myers, who had a less than ideal relationship with Andy Green.  In fact, in September 2018, Myers had to apologize to Green for comments on Fortnite about his manager:

“The Padres are doing cutoff and relays tomorrow at 3 o’clock—in September, dude,” Myers complained to Carlos Asuaje. “Oh my god.  It’s miserable, man.  It’s insane. Andy could not be worse than he is right now.”

Apologies aside, the damage had been done. A change, perhaps any change, should have benefited Myers. For Tingler, managing Wil Myers had to be child’s play compared to navigating a playoff run in the middle of a pandemic-shortened season. In his sophomore season, Tingler faces expectations heightened by the Padres’ first appearance in the postseason since 2006.

The Padres owe Myers $20 million a year through 2022 with an option for 2023. But his salary no longer stands out, as the Padres payroll has reached unimagined levels at $150 million, behind only the Dodgers, New York Yankees, and Los Angeles Angels.

At 30, Myers’ age puts him on the wrong side of the performance aging curve. However, he proved last year that he is not over the hill quite yet.

Hosmer blocks Myers at his optimal defensive position at first base. The Padres’ various experiments with his defensive positioning have had mixed results at best. His time at third in 2018 resulted in -15 DRS, UZR/150 -11.1 according to FanGraphs, while the center field experiment over 777.2 innings resulted in -15 DRS, UZR/150 11.1. In 2015 when Myers handled center for 298.2 innings, the results plummeted to -23.7.

Plus, Myers has a history of various injuries:

However, in the last two years, Myers has managed to stay off the disabled list for more than a relatively short period.

While Myers hit well against the Cardinals in the postseason, in the National League Division Series, he batted .100/.250/.200/.450.  In his defense, the team that stifled his bat went on the win the World Series.

Thanks to the additions of starting pitchers Yu Darvish and Blake Snell, general manager A.J. Preller has positioned the Padres well for another playoff run in 2021. The team has undergone multiple changes in the recent past, and sticking with the players, including Myers, who contributed to last year’s success, makes sense.

Trade rumors may have let up a bit this offseason but will probably never quiet completely as long as Myers plays for the Padres. However, he did have one of his best seasons in San Diego, albeit in a much smaller sample size than 162-games.

Hosmer blocks Myers at his best defensive position, and Jake Cronenworth acquitted himself well at first when Hosmer went down with an injury. The Padres have few choices but to play him in right field.

According to the Padres’ current depth chart, Myers will again play the majority of innings in right, as last year’s speedster, Jorge Mateo, had only 26 at-bats, Brian O’Grady five in 2020.  Most of Wil Myers’ value emanates from his offense, including his speed.  He topped out in his first season in San Diego with 28 stolen bases but added 16 to his totals in 2019.

The chances of trading Myers without picking up a portion of the $41 million still owed Myers are slim to none. Quieting the trade rumors makes sense at this point and would likely have a positive effect on his performance.

It’s no secret that Myers and former manager Andy Green did not mesh well, especially after the Fortnite debacle. However, Myers seemed more comfortable with Jayce Tingler this year.  By all appearances, team chemistry in general jelled in 2020.

Repeatedly trying to trade Myers has not improved his perceived value, and the Padres would undoubtedly have to eat part of his salary in any exchange. On a human level, constant trade rumors undoubtedly affect Myers’ psyche. The Padres had a breakout season in 2020, and Wil Myers contributed to the team’s success. Preller and company would be wise to stifle the rumors and voice their confidence in Wil Myers’ abilities.

Baseball has been a part of Diane's life since her father played professionally (mostly at the minor league level). She has written for a number of publications and concentrated on companion animal welfare. She welcomes the opportunity to write about the sport she loves. Diane shares her home with her husband and a house full of rescued animals.
Tags: Padres, Padres MLB, Padres Wil Myers, Wil Myers