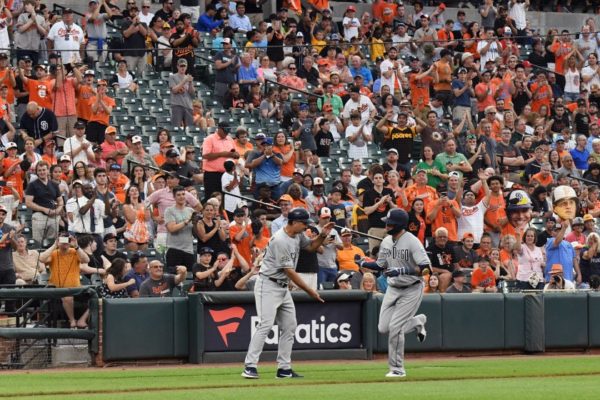 Manny Machado made his return to Baltimore and brought his bat with him, swatting a solo home run during his second at-bat to support Logan Allen in his second Major League start.

The 22-year-old Allen struggled in the first inning as the Orioles got on the board early. The first batter of the game, Hanser Alberto, slapped a double and later scored on a Trey Mancini single to left field.

The Padres offense roared to life in the second inning. Francisco Mejia and Ian Kinsler picked up back-to-back two-out hits to keep the inning alive and scored on Manny Margot’s two-run single. This brought up leadoff hitter Fernando Tatis Jr., who gave a hanging slider a ride to center field that barely cleared the center field fence, but it was long enough to net Tatis his ninth home run of the year. The two-out rally made the score 4-1.

Machado led off the third inning to a warm welcome from the stadium he used to call home. In his first at-bat, the 21,644 Baltimore fans in attendance gave their former third baseman a standing ovation while a tribute video played on the scoreboard. Machado tipped his cap to the Baltimore crowd before striking out in his first at-bat. The second at-bat was very different, as he drove a two-seam fastball left right down the middle 455 feet to center field.

In his return to Camden Yards, Manny Machado goes DEEEEEEEEEEEEP ???

Mejia’s solo dinger in the fifth inning pushed the score to 8-2. The home run was historic as, with Tatis, Margot, and Mejia hitting home runs in the game, it was the first time in Padres history that three Dominican-born players hit home runs in a single game. Mejia himself went 2-for-3 with the home run and a walk to push his batting average to .219 as he continues to grapple for more playing time.

After surrendering another run in the third inning, Allen settled in and switched on the cruise control. The rookie ended his day by pitching six innings of two-run ball, striking out five and only walking two. Allen threw 63 percent of his pitches for strikes while fetching seven groundball outs. He ended his night by striking out two Orioles in the sixth inning before relinquishing control to the bullpen.

Despite another run scoring off of Phil Maton in the seventh inning, the Orioles never came close to tying the game back up. Brad Wieck pitched a 1-2-3 eighth inning while Luis Perdomo induced a double-play to secure the win for the Padres.

Matt Strahm takes the mound for the Padres tomorrow at noon as they try to sweep the two-game series. Baltimore will counter with Dylan Bundy.

I am currently attending San Diego State University while working on achieving a major in journalism. At SDSU, I write for The Daily Aztec while also hosting the sports radio show "Picked Off", for KCR Radio. A loyal fan of San Diego sports, I hope to bring content that you will enjoy reading.
Tags: Baltimore Orioles, Logan Allen, Manny Machado, Padres vs orio, San Diego Padres