After taking Game 1 in the three-game series against the Arizona Diamondbacks, the San Diego Padres proceeded to drop Games 2 and 3 en route to a series loss on the road. Game 3 was a rough one as the Padres’ offense failed to put anything together, falling to the D-backs 4-2.

Joey Lucchesi and Patrick Corbin were the two starters in this one, both left-handers looking to further their dominance over the National League. Both teams were kept quiet through the first three innings as both starters had struck out four batters each. Corbin was dominating Padres batters, specifically the right-handers. Lucchesi was showcasing his impressive changeup-curve that had contributed to his leading all National League rookie pitchers in strikeouts.

The fourth inning would be Joey Lucchesi’s undoing. First baseman Paul Goldschmidt led off the inning with a walk and moved to second base on center fielder A.J. Pollock’s single through the right side of the infield. Lucchesi then got Chris Owings, the D-backs’ right fielder, to fly out to deep center field, allowing Goldschmidt to advance to third base. Then with one out in the inning, Lucchesi faced shortstop Nick Ahmed with runners on the corners. Pollock took off for second base and Lucchesi looked to have picked him off, but the young lefty’s throw to first sailed high over Eric Hosmer’s head, allowing Goldschmidt to score from third base easily. His team up 1-0, Ahmed turned on a Lucchesi curveball, launching a two-run home run and inflating the lead to three runs. Third baseman Deven Marrero walked and stole second base before advancing on catcher Jeff Mathis’ groundout to shortstop Freddy Galvis, and with two outs and a runner on third base, Corbin singled to center field, pushing the score to 4-0 in favor of the Snakes.

Lucchesi worked a relatively clean fifth inning besides a full count walk to Goldschmidt before he was pinch-hit for in the top of the sixth, thus ending his day. After striking out the first two batters he faced in the sixth, Corbin got Wil Myers to strike out on a ball in the dirt, but the pitch got away from Mathis, allowing Myers to reach base with two outs in the inning. Rookie third baseman Christian Villanueva continued his hot-hitting ways, going with a two-seamer away and finding the seats in right field. Villanueva’s seventh home run of the year left the bat at 100.7 mph and brought the Friars within two runs. That would be it for the scoring in this game, as both bullpens were sharp and kept the offense to a bare minimum.

Christian Villanueva doubled in the top of the ninth following a Wil Myers tough luck groundout, but Archie Bradley induced a Hosmer groundout to second base and a Jose Pirela strikeout, thus ending the Padres’ day. With the win, Arizona improved to 15-6 while the Padres dropped to 8-15.

Plate discipline was an issue for the Padres in this one. As a team, the Padres struck out 15 times against D-backs pitching, 11 of those coming against Corbin. A team that usually hits left-handed pitching pretty well, San Diego failed to put anything together as each starter struck out at least once. In reference to the chart below, all but one of Corbin’s strikeouts came on his slider. He was dominant in this one as the Padres’ hitters couldn’t figure out how to lay off of that slider bearing in on them. 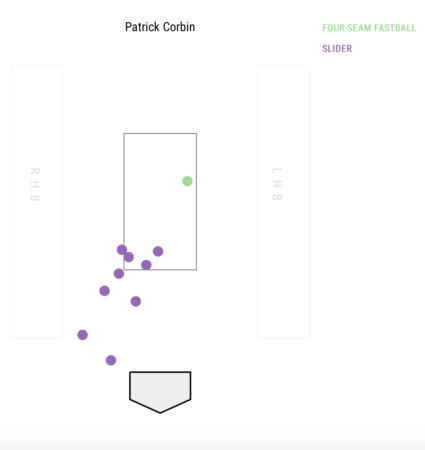 Manny Margot struck out three times and is hitless since his return to the lineup on April 21st. He is 0 for 8 with four strikeouts in his first two games back off of the disabled list. Margot isn’t in jeopardy of losing his job as the Padres’ primary center fielder, but a few more games like the one on Sunday will lead to a justified drop in the lineup. The 23-year-old still provides elite defense in center field, but he wasn’t exactly lighting it up before his short stint on the disabled list. He will figure it out in due time as it isn’t even May yet, but early returns have not been very encouraging.

Christian Villanueva batted third in the lineup and went 2-for-4 in the game with a home run and a double. He has been carrying the lineup as of late and he now leads the team in BA, OBP, SLG, OPS, HR, wRC+, ISO, and damn near every offensive category that can be named. With Eric Hosmer and Jose Pirela failing to reach base in this game, Villanueva has emerged as the Padres’ most consistent bat at this point of the season. Yes, it’s early, but Villanueva routinely hits the ball hard and if he begins to take advantage of pitches away and utilizes right field, he may work himself into the National League Rookie of the Year discussions permanently. His wRC+ of 222 is tops amongst rookies in both leagues and he continues to show out against good pitching.

Lucchesi looked good through three innings, but fell apart after committing a throwing error on a pickoff attempt. His final line was very underwhelming (by his standards) as he gave up five hits, four runs, and four walks over five innings pitched. Lucchesi was all over the zone, leaving a lot of fastballs and curveballs up in the zone. Even though his game plan is to attack with the curveball up in the zone, the D-backs’ hitters did a good job of fouling off those pitches and waiting for a fastball to straighten out. After showing impeccable control over his last two outings, Lucchesi struggled a bit with command, even though he may have been squeezed a bit by the home plate umpire. At any rate, this will be a good learning experience for the Padres’ rookie as adversity is a better teacher than success.

The Padres will head to Colorado for a three-game series starting tomorrow. Bryan Mitchell is expected to start.

Born and raised in Vista, Ryan has been a Padres fan since birth. Currently attending Palomar College, Ryan is trying his hand at expressing his passion for baseball through writing. There is no better life than the baseball life.
Tags: Christian Villanueva, Joey Lucchesi, MLB, Padres, Padres vs Diamondbacks, San Diego Padres