Padres’ third baseman Manny Machado is living up to his massive contract and deserves 2020’s most prestigious individual award.

When the  San Diego Padres signed Manny Machado to a nice, round 10-year, $300 million contract ahead of the 2019 season, becoming, then, the largest free-agent deal in North American sports history, expectations rightfully shot through the roof.

Last season, Machado floundered at times, trying to find his footing in his new home after spending his first 6 1/2 years in the big leagues on the opposite coast and in the American League before becoming a midseason rental for the Los Angeles Dodgers in 2018.

The doubters and haters came flowing in, both inside and outside of the Padres’ fanbase. Many pundits continued the tired narrative that he was “lazy” and “fat and happy” with his new contract to where he didn’t try to be good anymore. Others who lacked creativity questioned his character and hustle. This did not just come from national media, who only saw the Padres on the occasional MLB Network highlight, but it came from some of the Friar Faithful themselves. Social media warriors flooded to battle every time Machado struggled, calling for heads to roll and changes to be made. Patience was preached upstairs by the Padres brass, but many grew impatient. Padres fans can be a jaded bunch, which is understandable after just five playoff appearances in 51 years before this season.

I could spend hours upon hours pulling up comments and Tweets about how Manny is a bust or that the Padres were dumb for spending that kind of money…or worse.

Machado gave himself a harsh self-assessment after last season concluded. “There is no excuse. My batting average wasn’t there. A couple of things weren’t there. I’m disappointed in myself…I played like (expletive).”

Clearly, he made it his mission to turn around in a big way in 2020, and boy has he ever.

Now, with just a weekend’s worth of games left in the regular season, Machado, the Padres, and their fans can take a step back and look at all Machado has accomplished this year. If there are any feelings short of satisfaction, joy, or relief among the fanbase, they are terribly misguided. Yes, he did get off to a slow start again. Do you know who else did? It seemed like literally every former MVP currently employed by a big league team (some still have not recovered, see Jose Altuve, Christian Yelich, and Cody Bellinger) struggled mightily in this unprecedented season with an irregular schedule. During the first 15 games, Machado hit .193 with a .636 OPS.

Since August 9, Machado is hitting .357 with a 1.104 OPS and 187 wRC+. If his numbers hold through the end of the weekend, he will have set a new career-high in OPS and OPS+. This is coming from a player who, in three separate seasons, has received MVP votes before 2020.

However, the National League MVP does not just get awarded to someone having a career year. It’s given to the best player in the National League that season. That player is Manny Machado. Among qualified hitters in the National League, Machado is second in home runs (16), third in RBI (47), seventh in slugging percentage (.603), eighth in OPS (.979), and third in fWAR (2.7, just behind teammate Fernando Tatis Jr. for second). Yes, some players have better seasons in some categories. Still, I could argue none of them are doing it while also playing elite defense at one of the most challenging positions on the field and lifting an entire franchise from the darkness.

The biggest threats to a Padres player winning MVP (Tatis is undoubtedly still in the running despite a massive, recent cold streak) are Freddie Freeman (first base), Mookie Betts (outfield), and Juan Soto (outfield). None of them play as critical a defensive position as Machado, who is sixth in the NL in defensive WAR at 0.6. His 8 Defensive Runs Saved are fifth-best in the National League, and only Betts’ 9 DRS is anywhere near Machado’s total among MVP candidates. However, Betts does not play nearly as important of a defensive position as Machado. Freeman is at 0 DRS while Soto comes in at -1 DRS.  The Friars’ third baseman is also in the 81st percentile for Outs Above Average per Baseball Savant. 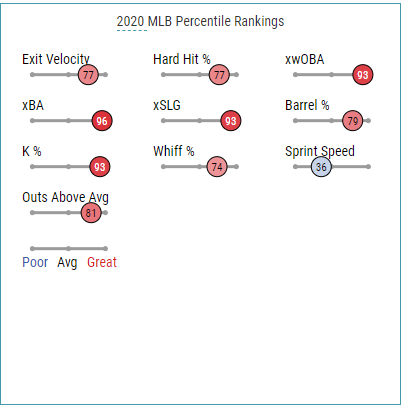 Plus, take Betts away from the Dodgers, and they are still a first-place, playoff-bound team with championship aspirations. The Dodgers were the best team in baseball before getting Betts. Freeman and Braves are now N.L. East champs for the third year in a row. Soto’s Nationals are eliminated from the playoffs. Take Machado away from the Padres, and what does that team look like? The award is the Most Valuable Player. The Padres are, at best, clinging to a bottom-seed playoff spot if Machado isn’t on the team but most likely are under .500. Again. Machado lifted a franchise so riddled with mediocrity or worse and brought them squarely onto the national stage, not just as the darlings of 2020 but as a legitimate threat to every other team’s postseason goals.

Machado was introducing the world to Slam Diego before the world was ready when he launched a go-ahead grand slam at Dodger Stadium a week before the hoopla began.

Then, as if that wasn’t enough, the next week, Machado hit the third of the team’s string of four straight games with a grand slam with a walk-off version.

This is the year that the Padres have been building towards for nearly half a decade. Machado was one of the final pieces that sent them over the edge, and now, he is genuinely playing up to his monstrous contract. He is worthy of the Most Valuable Player Award, a distinction only awarded to a Friar once in 51 years, in 1996. This is the year a Padres player deserves it. That player is Manny Machado, and he also deserves your praise and, if necessary, your apologies.

Native of Escondido, CA. Lived in San Diego area for 20 years. Padres fan since childhood (mid-90s). I have been writing since 2014. I currently live near Seattle, WA and am married to a Seattle sports girl. I wore #19 on my high school baseball team for Tony Gwynn. I am a stats and sports history nerd. I attended BYU on the Idaho campus. I also love Star Wars.
Tags: Fernando Tatis Jr., Machado, Machado MVP, Manny Machado, MLB, Most Valuable Player, MVP, Padres, San Diego Padres