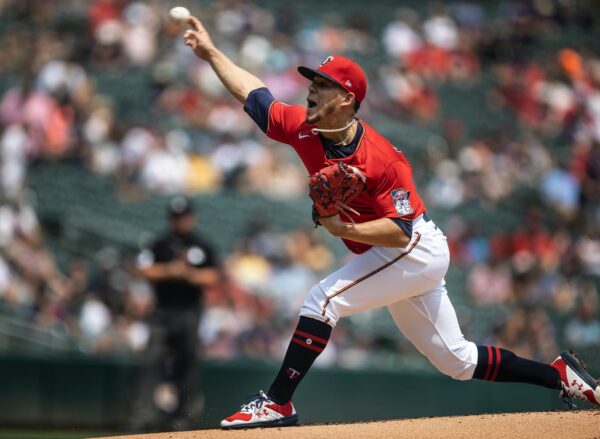 The San Diego Padres should have interest in Minnesota Twins’ starter José Berríos who has been mentioned in possible trade rumors approaching the deadline.

The trade rumors are heating up, and the San Diego Padres will be mentioned in many different scenarios.

Jose Berríos is a name that stands out the most on the trade market.

The Twins’ ace is putting together a solid 2021 season, but Minnesota currently has the sixth-worst record in baseball. The Twins most likely will be sellers, and the Padres should be all over Jose Berríos.

Twins RHP José Berríos puts hitters away with one of the sharpest curves in baseball. ⚾️🔥 pic.twitter.com/gBT26FNkga

The starting rotation is not where they expected it to be at this point in the season. Injuries are piling on, and it’s forcing the Padres to bring up many minor-league arms. Starters Yu Darvish and Blake Snell spent time on the Injured List (IL). Snell recently returned to the rotation and pitched four innings against the Nationals on Saturday, and Darvish is expected to start against the Atlanta Braves. Starter Ryan Weathers is currently on the IL with a bone fracture in his right ankle. Dinelson Lamet is also on the IL, and it is unclear when he will return.

The Padres lost starter Adrian Morejon to Tommy John surgery earlier in the season, and we all know about Mike Clevinger.

Even though Chris Paddack is healthy, his performance on the mound is not productive. His numbers are high, and strikeout numbers are low, making it difficult to keep him in the rotation.

It seems as if Padres’ top pitching prospect McKenzie Gore is behind schedule. He isn’t expected to make his major-league debut any time soon. With the injures and lack of production, the Padres need to make a move at the deadline for another starter.

Kansas City Royals starter Danny Duffy and Pittsburgh Pirates starter Tyler Anderson also have been brought up in rumors. Though, the Padres will be getting an ace in Berríos if they can land him.

There are still plenty of prospects that the Padres can trade for Berríos, and it likely wouldn’t cost MacKenzie Gore, CJ Abrams, or Robert Hassell III. If that is indeed the case, general manager A.J. Preller won’t hesitate to pull the trigger. I doubt any team would want him with the way Paddack is pitching, but he could be included in a trade.

Possible 2022 rotation with the return of Sunshine

Wouldn’t that be something?

The Padres are clearly in win-now mode and are competing for a World Series title. The offense is starting to click, but the rotation needs improvement if the Padres want to remain competitive. Adding at least one more starter to this rotation should release some of the stress on manager Jayce Tingler and the rotation.

Chris is a graduate of the University of San Diego. He is the former Sports Editor for the USDVista newspaper. Chris is also an athlete and is huge fan of San Diego sports. Chris has covered the San Diego Loyal, and contributes regularly about the Padres.
Tags: Jose Berrios, Jose Berrios Padres, Padres Trade, Padres Twins Trade, San Diego Padres