The San Diego Padres have just split a two game series against the Baltimore Orioles. This series really wasn’t anything too significant. This series was basically split up into a positive and a negative. A good game and a bad game if you will.

The clear positive in this series was the offensive showing in the first game of the series. The clear negative turned out to be Erik Johnson in game two. There really wasn’t anything too spectacular in this series to be analyzed. The positives and flaws were really clear as day. From Baltimore the Padres will now move on to Cincinnati. The Friars will start a four game series at Great American Ballpark. Before we get to that preview, let’s dive into this recap first.

The Baseball season is a long, perilous 162 game journey. Offensive consistency is an obvious virtue for success in a MLB campaign. Before this game the Padres had scored at least five runs in their last five games. Well the Padres would continue that trend for a sixth consecutive game. That would turn out to be the key to victory in game one of this series. Matt Kemp would start off his outstanding performance with an RBI single in the first inning. The Padres would lead the game 1-0. Luis Perdomo would be on the mound for the Padres. He would start off well with two scoreless frames. The O’s would then launch their attack in the third inning of the game. San Diego native, Adam Jones would start it off with an RBI double. Then Hyun Soo Kim would add another run to the board via an RBI single. The Orioles would now lead 2-1. The Friars would quickly bring it back in their favor in the top of the fourth. Derek Norris would get a solo shot off of Tyler Wilson to make it a 2-2 affair.  Wil Myers would then drive in Alexei Ramirez to give the Friars the advantage of 3-2. Unfortunately for the Pads, Luis Perdomo would really start struggling in the fourth. Pedro Alvarez would blast a two run home run to reclaim the lead for the O’s. Alvarez would do it again in the fifth inning to make it a 6-3 lead for the Birds. This game already seemed lost for the Padres. But then came the seventh inning. 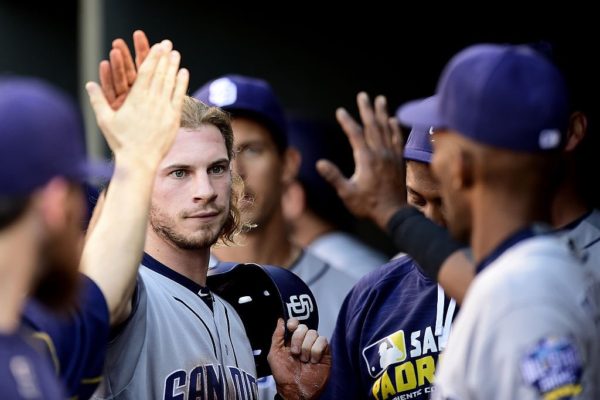 The Padres would get extremely lucky in the seventh inning of this game. The team would get four runs in this inning. One would be due to a fielding error by Mark Trumbo. Another would come via a bases loaded walk. The third run of the inning would come via a wild pitch. The fourth and final run would be via a ground out. The inning would end with the Padres leading 7-6. As you can see the runs were a bit more “luck of the draw” than offensive performance. However in my eyes if you can get runs on the board, that is performance on its own. If those runs didn’t convince you, the Padres would continue the show in the ninth inning. Alexei Ramirez would drive in Norris with a single. Travis Jankowski would then put a run on the board with a sacrifice bunt. Finally Matt Kemp would cap off his 4 for 6 night with an RBI single off of Odrisamer Despaigne. The Padres would go into the bottom of the ninth with a 10-6 lead. Fernando Rodney would go into the inning with a save on the line. With two outs and runners on third and first, Pedro Alvarez would come to the plate. Alvarez would single and just like that Fernando Rodney would give up his first run of the season. After 26 and a third innings, someone had broken the barrier. Rodney would not let it phase him however and he would pick up his 15th save of the season. The Padres would have a great offensive showing in this one. The Final score would be 10-7.  The negative in this game would be the start put in by Luis Perdomo. Perdomo would throw five innings and allow six runs to cross the plate. With an unreliable offense like the Padres is, that isn’t a nice start at all. Despite that the offensive performance really overshadowed Perdomos’ horrendous outing.

Game 2: There’s That Offense I Know

Before this game the Padres offense had scored at least five runs in their last six games. This was something very unusual for the inconsistent offense of the 2016 Padres. Well on Wednesday the Padres went back to the old habits. After scoring 10 runs on Tuesday, the Padres would only score two on Wednesday. The Friars would fall 7-2 in this one. The Padres would struggle again against a pitcher who has not performed recently. Ubaldo Jimenez would be the man who would get the nod on Wednesday for Buck Showalter. Before this game Jimenez had struggled heavily with an ERA of over seven. Well Jimenez had quite the performance. He would throw six innings and only allow two runs with seven strikeouts in the mix as well.

Erik Johnson would be on the mound for the Friars. As predicted he would struggle heavily against one of the best offenses in baseball. Johnson would only pitch four innings and allow six runs. With a four game series coming up, you at least want your starter to eat up a few more innings. To add to Johnson’s abysmal performance he would also allow two home runs. One to Mark Trumbo and another to Ryan Flaherty. That now marks seven home runs given up by Johnson as a Friar. With the signing of Edwin Jackson it is very likely that Johnson may not be on the MLB roster for much longer. Matt Kemp would pretty much be the only offensive production for the Padres in game two of the series. Kemp would go 2-4 with a pair of RBI singles in this game. Overall this game would just be an atrocious showing for the Padres. The Padres offense could not get through a struggling pitcher once again and that is frustrating.  Erik Johnson would also have just an awful performance.

The Resurgence of Matt Kemp

Matt Kemp had a horrible month of May. In May, Kemp had an average below the Mendoza line at .186 with six home runs. Since then Matt has really picked it up in the month of June. Although he only has two home runs he has an average of .364 with 16 RBI. In his last 11 games Kemp has himself an otherworldly OBP of .449. Kemp has also really brought down the strikeouts a lot too. It’s really nice to see Matt turn it around and become a completely different player than he was in May. Kemp had a phenomenal last couple of days in Baltimore. He would go 6 for 10 with four RBI in two games against the Orioles. Those are just amazing numbers. Kemp is due to have a great series against the struggling Cincinnati Reds. If Kemp can keep on producing the way he has, surely some team will take a gander at him. For now though, it’s nice to have him on the team.

Francisco, 21, Chula Vista area, Journalism student at Southwestern College. I have been a Padres fan all my life, did most of the series previews and recaps in the Padres' 2016 season for EVT. Now I focus more on the Tijuana Xolos soccer team, get press passes for every home game and write consistently about the team for EVT.
Tags: Baltimore Orioles, Erik Johnson, Luis Perdomo, Matt Kemp, Padres, San Diego Padres, Wil Myers

The Padres NEED to show confidence in Trent Grisham