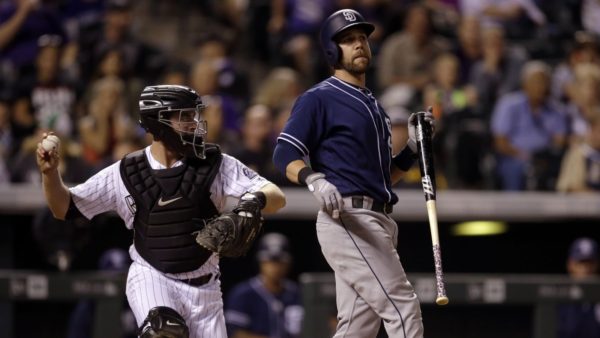 The San Diego Padres were flying high before this weekend series against the Rockies started. The Friars had just swept the San Francisco Giants at AT&T Park.

The team looked to be on pace to win another series against the Rockies. Well as we fully understand by now, baseball especially in the 2016 Padres case, is highly unpredictable.

Who would have thought that a shutout would even be possible in this series? Well hats off to Jon Gray because he made it happen. The Padres were outscored 24-10 in this series and really did not look on point at all. You could tell right from the first game when they would blow a 7-5 lead in the ninth inning.

They would follow that performance by getting shutout and blown out in the second game of the series. They would finally cap off the series with a lackluster performance by Jarred Cosart. Overall this series left a lot to be desired. The Padres were absolutely dominated by the Rockies in this series. Let’s hope that won’t happen against the Diamondbacks when the Padres return home to Petco Park.

Game One: Brandon Blown Save

The San Diego Padres have been hit by a plague of inconsistency all season long. It has affected hitters like Wil Myers and starting pitchers like Edwin Jackson. This inconsistency has also hit the bullpen pretty hard as well. You look at a guy like Brad Hand for example– his numbers look solid but he has been the reason for quite a few losses throughout the campaign. Then you look at Brandon Maurer who has probably been the most inconsistent member of this Padres Pen. Maurer has looked great at times striking out the side but then there has been nights like on Friday. Where Maurer has completely blown the game for the San Diego Padres. He definitely does not provide the same type of security Fernando Rodney had in the first half of the season.

In terms of other components in the game Friday, they would actually be quite solid. Christian Friedrich would have a nice game allowing four runs over five innings. That is not bad at all considering that the game was played at Coors Field. The offense would do all they could as they would get themselves seven runs in the game. That should be plenty to win any ballgame at any ballpark. The big performers of the day for the Padres would turn out to be Luis Sardinas and Wil Myers. Sardinas would hit a two-run home run. Wil Myers would go 2-5 on the day with two RBI and a home run as well.

We then get into the messy component of the game which was the bullpen. Specifically Brandon Maurer would turn out to be the Padres downfall in this game. Brad Hand would allow a run in the seventh inning as well which would turn out to be vital in the game as well. Going into the ninth inning the Padres would have a 7-5 lead. Maurer would absolutely not take care of business for the team. He would allow three runs to score and the Rockies would take the series opener. The final blow of the game would be an RBI single by Daniel Descalso to drive in rookie David Dahl.

This would turn out to be one of the worst games of the 2016 Padres season. The Padres would get blown out and shutout all in the same game. The final score would be 8-0 and Jon Gray would pitch an absolute gem against the Friars. For the Friars, Edwin Jackson would look absolutely abysmal once again. The veteran would only go four and a third and allow eight runs on 10 hits. His counterpart Jon Gray would have the best game of his short career. But it wouldn’t just be the best game of his career it would actually be the best start at Coors Field… ever.

Gray would pitch a complete game shutout in which he would only allow four hits and strike out 16 batters. Gray had great performances all season long against the Friars so this amazing start really is not surprising. In fact Gray has now struck out 49 Padres batters throughout this 2016 season. That is an amazing number against one single team. The Rockies offense would also be dominant in this game of course scoring eight runs. The main performers of the game would be Nolan Arenado and Tom Murphy. Nolan Arenado would go 2-3 with his 38th home run of the campaign. The Tom Murphy would have a career day going 2-5 with five RBI and two home runs. Murphy would account for almost all of the Rockies offense in the game. This game would be absolutely pitiful as a Padres fan. I hope that we won’t see another one like this for the remainder of the season.

The Padres would of course lose this game, but what would make headlines would be something outside of the game of baseball. Yangervis Solarte‘s wife Yuliett would unfortunately pass away after battling cancer. My thoughts and prayers are of course with Yangervis and his family. The Padres would unfortunately lose this game and suffer a series sweep to the Colorado Rockies. The game would end 6-3 and the Rockies would win in dominant style. Jarred Cosart would have a lackluster performance allowing five runs over three and two-thirds. His counterpart Chad Bettis would have a pretty nice game. Bettis would only allow three runs in five and third innings.

In terms of offense Adam Rosales and Wil Myers would be the only run producers in the game for the Padres. Rosales would blast a solo home run in the second inning of the game. Rosales would give tribute to his teammate and copy Solarte’s trademark home run skip and point to the sky. A very touching moment and a class way to let their teammate know they are thinking about him. Myers would provide a two RBI double in the sixth inning as well but that was it. The Rockies main run producers would be Carlos Gonzalez and Mark Reynolds. Cargo would go 2-4 with two RBI on the day while Reynolds would have himself a two run home run. Overall this would be another really lackluster game for the San Diego Padres. This series as a whole would leave a lot to be desired. I just hope to not see another game like Saturday’s for the remainder of the season. That game would be absolutely disrespectful to the fans. I mean Ryan Schimpf would end up striking out four times in that game. Well time to forget this series and move on to the next. Go Padres!

Francisco, 21, Chula Vista area, Journalism student at Southwestern College. I have been a Padres fan all my life, did most of the series previews and recaps in the Padres' 2016 season for EVT. Now I focus more on the Tijuana Xolos soccer team, get press passes for every home game and write consistently about the team for EVT.
Tags: Brandon Maurer, Colorado Rockies, Edwin Jackson, San Diego Padres, Wil Myers