The San Diego Padres came into “The City of Brotherly Love” with a renewed sense of worth. The team was flat-out embarrassed at home in their opening series by the Dodgers. They looked to prove the critics wrong in Denver.

A trip to Colorado proved productive for the Padres as they took two out of three from the Rockies. Of course the thin air in Colorado can be really healing for a slumping offensive unit. The team now headed to Philly and the offensive explosion in Colorado seemed to provide the Padres with much-needed confidence.

In reality the offense sputtered horribly in the four game series. Manager Andy Green rested every one of his starters at one point in the series except for Jon Jay and Cory Spangenberg. Wil Myers and Matt Kemp both had scheduled days off and their absence from the lineup really exacerbated the Padres struggle offensively.

The team was dominated by the Phillies young pitching staff. Aaron Nola, Vincent Velasquez and Jerad Eickhoff were filthy for the Phillies. At least the Padres hitters made them look that way. The series was a step in the wrong direction for the team. New manager Andy Green needs time to right the ship, but the fan base will surely not be patient in that regard.

The return of Alexi Amarsita from Triple-A turned out to be huge for the Padres as his seventh inning squeeze bunt was the difference in the game. Amarista laid down a perfect safety squeeze bunt between the pitchers mound and first base line. The deciding run was scored easily by Derek Norris from third.

The game will be remembered for a bizarre infield fly situation in which the umpires incorrectly called an infield fly on a pop up by Darin Ruf to shallow left field. Wil Myers lost the ball off the bat and Alexei Ramirez was not firmly planted under the fly ball. The play resulted in a two outs for the Padres as a runner was forced out at third base.

Aaron Nola was tough for the Padres as he struck out a career-high nine batters. He was touched up by Wil Myers in the fourth inning as the slugger smacked a home run into the left field stands. The Padres got an early lead for their starter but Andrew Cashner failed to hold the lead. The fireball throwing right-hander was dominant early for the Padres. Cashner was consistently throwing in the high 90s and was also featuring a power curve/slider that was effective. The wheels fell off for Cashner in the 6th inning as he walked Cesar Hernandez and then gave up a single to Odubel Herrera. After another single by Maikel Franco, Cashner was removed from the game with the bases loaded and nobody out.

The infield fly play was next and that was obviously a huge play in the game as the Phillies scored a run, but lost two outs on the play. At the end of the day the Padres bullpen held the lead as Brandon Maurer and Carlos Villanueva pitched a scoreless inning each. Fernando Rodney earned his first save of the year and the Padres seemed to be destined for a great road trip. Well, it seemed that way.

With the loss of Tyson Ross, the Padres looked to be in bad shape with their rotation. That couldn’t be further from the truth as each of the Padres young starters had stepped up so far. Robbie Erlin was recalled from Triple-A without even throwing a pitch for the Chihuahuas in the 2016 season. His first performance in Colorado resulted in a win and he looked to keep up the momentum in Philadelphia.

Erlin was very sharp on the day and pitched extremely efficiently. The problem was Charlie Morton was equally as sharp and the Padres bats had turned very cold. With Wil Myers out of the lineup the Padres struggled to get anything going offensively. The team only managed three hits off of Morton as the right hander went 6.2 innings, walking four and striking out seven. The Phillies bullpen held the lead and Jeanmar Gomez earned his third save of the season.

Erlin pitched extremely well and was the victim of a two-out RBI triple by Odubel Herrera in the sixth inning. Erlin stuck out the next batter Maikel Franco, but the damage had been done and that ended up being the left-handed pitchers last inning of work. He went six strong inning only allowing three hits, while walking two and striking out seven batters.

This would be the third time the Padres had been shut out in the first eight games. Not a positive sign for this teams future offensively. The team strikes out too much and fails to have productive at bats consistently. With that type of recipe the Padres skipper will have a hard time implementing his aggressive style of play.

The Padres would face another tough young pitcher in the Phillies staff. Jerad Eickhoff proved to be very difficult for the Padres hitters to square up. He features a nasty 12 to 6 curve ball that constantly had the Padres off-balance at the plate. The young right handed pitcher went seven strong innings for the Phillies. Eickhoff struck out nine batters and only allowed four hits on the night.

If not for a late rally by the Padres in the ninth, the team would have been shut out again. Brett Wallace singled to right to score Derek Norris with two out in the ninth. Alexei Ramirez followed with a pop out to shortstop to end the game. Jeanmar Gomez would record his fourth save of the season and the Phillies would suddenly look like a great pitching staff with the Padres in town.

Offensively the team had chances. The bases were loaded in the eighth inning with one out and Matt Kemp and Wil Myers due up. Both players struck out swinging at off-speed pitches and the game was essentially lost with those two at bats. I know it happens from time to time, but when your two best offensive threats fail to get the job done when the team is struggling, the situation gets magnified.

This team will need to find some offensive groove. Ultimately they need to get on base more and put the ball in play. The team is currently leading all of major league baseball in strikeouts and that is a stat that was supposed to be improved on this 2016 season. 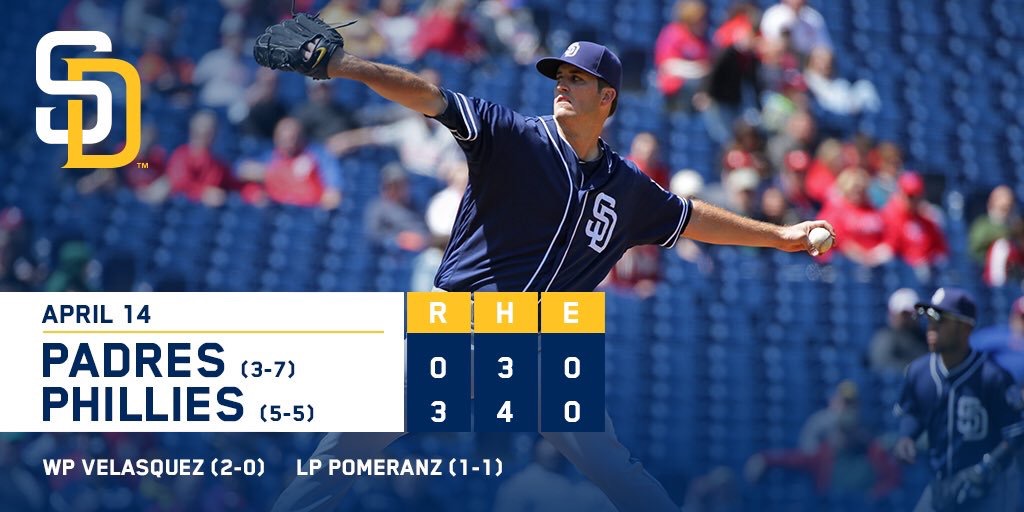 The San Diego Padres were shut out for the fifth time in 10 games to start the season on Thursday morning in Philadelphia. The team was dominated by Vincent Velasquez as he threw a complete game shut out on just 113 pitches. Velasquez was filthy, featuring a nasty assortment of off-speed pitches mixed with a 97 MPH tailing fastball. He struck out 16 Padres batters on the day while allowing three hits. He failed to walk one single batter.

The 23-year-old Velasquez was acquired from the Houston Astros in the Ken Giles trade this offseason. He has a tremendous future in the Phillies rotation. The Padres were held in check the whole day and only Alexi Amarista put the ball in play with solid contact. He recorded two singles off of Velasquez. Amarista seems poised to stay on the roster now as he has controlled his over-aggressive approach at the plate.

The performance of Velasquez overshadows the fact the Padres got yet another solid outing from left-handed pitcher Drew Pomeranz. He went six solid innings on 101 pitches, only allowing three hits and two runs. Pomeranz allowed a solo home run to Ryan Howard in the second but settled down the rest of the game. He ended up walking three batters and struck out eight Phillies on the day. He is trending the right direction after two solid performances in two hitter friendly ballparks.

The Padres return home for a three game series against the Arizona Diamondbacks. They need to have a successful home stand if they wish to compete this season. They cannot risk falling further behind in a competitive N.L. West. They also cannot continue to take these mental beatings. With a rookie manager and a roster with a high turn over rate, the Padres once again need chemistry to succeed. That is not an easy thing to create as the team has many unanswered questions.