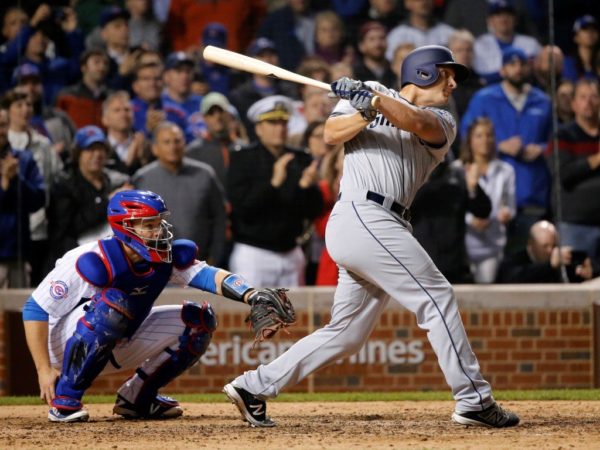 The San Diego Padres traveled to Chicago to take on the team with the best record in the league. The Chicago Cubs are built to win now and the team has goals of a World Championship. The team is led by manager Joe Maddon and has gotten off to a fantastic start so far in the 2016 season. The ‘Loveable Losers” are looking like a very serious contending team this season and the Padres looked to have their work cut out for them in this series.

Overall the Padres had a very nice series. Taking one game from the Cubs in itself is quite an accomplishment, taking two is an absolute miracle. Cesar Vargas got roughed up a bit in the series opener, but the Padres still rallied to make it a close game in the end. Could you imagine if the team took that first game and earned the sweep?

Still taking two out of three from a team like the Cubs is a great momentum boost for the Padres. Hopefully the team can stay on task and build upon this series. The team is still coming together and building chemistry in a sense, so series wins like this can be huge in the marathon called a major league baseball season. Andy Green will need to keep his troops focused.

After a rain cancelled game on Monday, Cesar Vargas took the mound on Tuesday looking to get his first win of the season. He was denied by the Cubs as Vargas for the first time in his major league career looked human. He would only go four innings on the day allowing 10 hits and six earned runs on 92 pitches. Luis Perdomo would come in to relieve Vargas and would go three innings (his longest single outing in the majors thus far) allowing two earned runs on two hits for the Padres.

A late home run by Alex Dickerson made the score close in the end. The grand slam in the eighth inning brought the score to 8-7 Cubs. However the Padres were unable to do anything off of Hector Rondon, who pitched a scoreless ninth inning to earn his seventh save for the Cubs. Jon Lester earned the win after going six innings and allowing three runs on four hits. He wasn’t particularly sharp, but was effective and the offense provided him with more than enough run support to earn the win.

Ben Zobrist would go 4 for 4 on the day with two RBI and three runs scored. Addison Russell would have two extra base hits on the day and drive in three runs. Kris Bryant hit a two-run double for the Cubs as well as the team just pounded the Padres pitching staff for 12 hits . Melvin Upton Jr. slammed his third home run of the season off Jon Lester in the 4th inning. Jose Pirela made a spot start at second base and recorded two hits and scored two runs. Even in the loss there were some positives.

Colin Rea got the ball for the morning game of the double-header. He didn’t have his best stuff and only went five innings on the day. It took him 110 pitches to go five as Rea constantly battled from behind in the count. He allowed seven hits and four runs during his five innings. The Padres bullpen would be the story as they would step in after Rea departed and only allowed two hits in four innings of relief. Carlos Villanueva, Ryan Buchter, Brandon Maurer and Fernando Rodney would close out the Cubs and end their 8-game win-streak.

A huge three-run home run by Brett Wallace in the seventh inning propelled the Padres offense. The dinger gave the Padres the lead and the bullpen just shut the door after that. The Padres added a run in the eighth inning, but it was not needed as Fernando Rodney recorded his ninth save of the year. A great game for the Padres as the offense came back and the bullpen did its job. Things to look forward to if you are a Padres fan.

Drew Pomeranz took the mound in game two of the double-header and continued his dominance in the 2016 season. Pomeranz earned his fourth win of the year going six strong innings for the Friars. He only allowed three hits while walking three and striking out 10 in his 101 pitches. Again the bullpen would do their job as Kevin Quackenbush and Brad Hand would pitch two scoreless innings of relief and Fernando Rodney would once again shoot his arrow at Wrigley Field. The energetic closer would pitch the ninth inning earning his 10th save of the year.

A Christian Bethancourt solo home run in the 5th inning would be the only run of the game. John Lackey would be almost perfect, but the Padres backup catcher showed his power potential in slamming a home run into the stands. Lackey went eight innings allowing just one run on three hits while striking out seven batters. He was good on the day, but Pomeranz was just better. The two teams managed only seven hits in the second game of the double-header.

For the Padres to take two of three from the Cubs is a great boost to the teams morale. With a young manager like Andy Green at the helm, the Padres need more series like this to build chemistry. Wins of this manner do a ton for the mental thought process of the team. Baseball is a very mental sport and nothing but positives can come out of a series like this. On to Milwaukee and hopefully the team can keep up the same trend and beat up on a Brewers team that is lacking direction right now.